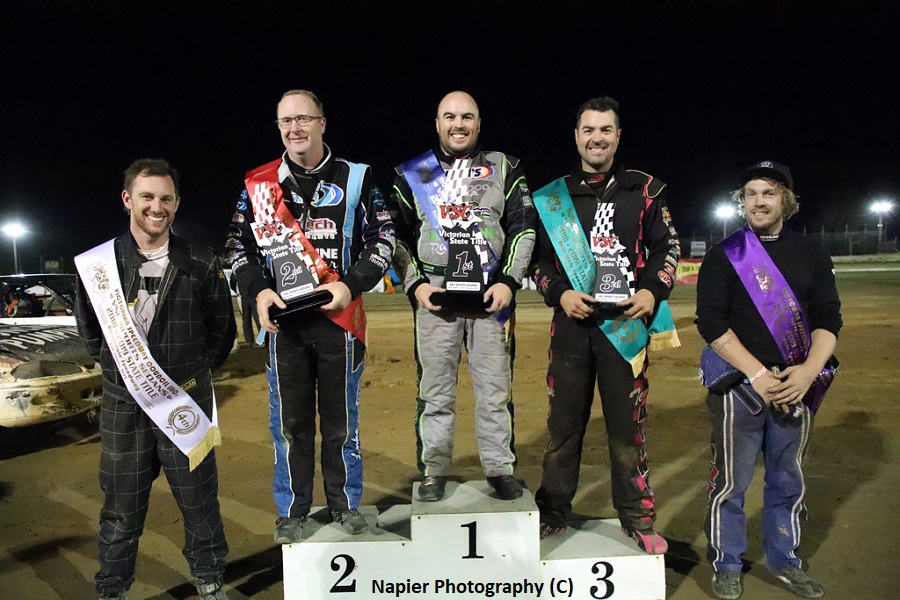 East Gippsland’s Bairnsdale Speedway played host to Victorian Speedway Councils finest available Sports Sedan racers on Sunday 27th of January with the Victorian title up for grabs and it would be a former champion Jamie Paull who would reign supreme conquering all, after winning all three of his qualifiers and then the title race.

Also on the programme at Bairnsdale were the VSC LS Sprintcars and the Standard Saloons with Justin Barton and Patrick Vuillermin taking wins respectively.

Paull led into turn one with O’Brien and Fallon in chase. Kershaw was under pressure early with Bourke passing him then Cornwall. Bourke and Cornwall were amongst a handful of racers to pull out of the race before the halfway mark.

At the lap five mark, Fallon moved into second. Kershaw’s race finished just past the half way mark as O’Brien slipped down the order in battles with Service, Donegan and Andrew Dike left O’Brien in eighth place at lap sixteen. 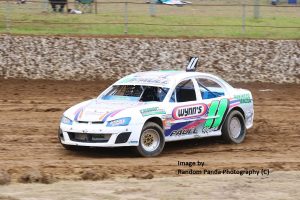 At the front Paull still lead Fallon and at the same point of the race, Donegan had moved from eleventh to third and was in great stoush with Dale Smith who got back past Donegan on lap nineteen and into third. Service and Dike had their own battle going on and Service who was earlier in front of Dike and chased him for a number of laps got past him again around lap twenty three before Dike came back at Service and got back into podium position.

The laps had wound down and Paull who had leave all twenty nine to this point started his lap with a gap on Fallon and Donegan still trying to challenge for second place.  The chequered come out, Paull took the win with Fallon, Donegan, Smith and Dike. 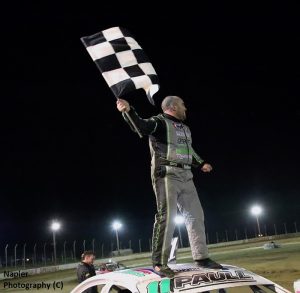 After the race Paull understandably was ecstatic and full of praise for the racing surface for the feature event. “That track was fun to race on. It was elbows up racing and it encouraged passing for our sedans. We bounced around a little and that’s good fun. Credit to the club and the track crew for their efforts tonight. Well done to the other competitors and thank you to everybody who supports me, especially my wife Fahy and family for all their efforts to make sure I am ready and everything runs smoothly.”

In the Sprintcar feature race event it started with a couple of the younger race drivers in the class getting a little bit of a head start Chloe Laity who is seventeen years old and her brother Nigel whose sixteen started out front.

Not far behind Michael Evans and David Dennison. Nigel Laity led lap one with his sister chasing.  By lap three Dennison rounded up the Laity’s around the high side and led Nigel Laity and Justin Barton who had moved from his sixth place starting place into third.

Dennison looked to be in control of the race with Barton close but not quite in the right spot to make a pass, then on lap ten it all went wrong for Dennison who spun himself out of the lead and was sent to the rear of the field to continue. 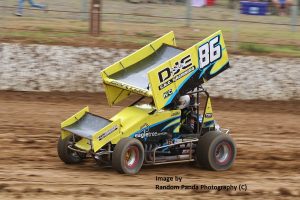 Barton assumed control and with Siely in tow. Nigel Laity was ahead of his uncle Peter Laity and Chloe was behind her uncle in fifth. That’s how the field finished and Barton who had been the strongest in qualifying was a deserved winner.

Completing the racing for the evening was the Standard Saloons with enough entrants to run double heats per round before moving into the final, and what a final it was.

Howie was deemed to cause the stop and went to the rear of the field and Vuillermin was the new leader with Gooding chasing him and Brennan moving into third place. When the race was done the final top five were Vuillermin from the Rosedale club, Gooding from the Drouin club and Jack Brennan from the Nyora club then Howie and Leigh Mitchell.