Bairnsdale Speedway on Saturday night hosted the ‘Dwyers Toyota’ supported Victorian Division 2 Hot Rod title along with major events for the Wingless Sprints and Compact Speedcars with three outstanding victories for Jack Day in the Compact Speedcars, Jamie Mills in the Wingless Sprints, however none was better than Ricky Mills in the Division 2 Hot Rods who won remembering his recently lost father passing the pre-event favourites Scott Laidlaw and Leigh Burkett on his way.

A fantastic crowd filed into the race track despite some wet weather during the day, which sensationally cleared to be blue skies by the time the race meeting got underway.

Division 2 Hot Rod competitors set about earning their qualifying spot through the four pre-title heat races with each driver competing in three of the four.  Defending champion Scott Laidlaw won the first qualifier with Mills stepping back into a Sedan after some absence due to competing in his Wingless Sprint driving for Bob Callanan finishing in third.

Ricky Low then won the second heat race and Mills won the third ahead of Melissa Tatterson. The final heat race was won by Laidlaw and this placed him into pole position for the title race with Burkett, Mills, Low, Melissa and her father Rob Tatterson filling the top six places. 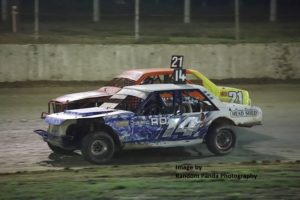 The title race event began with Laidlaw assuming control of the field with Burkett, Mills, Low and Melissa Tatterson settling in as the top five. The first major exit of the race came just past the first five laps when Melissa Tatterson pulled infield. Jake Van Den Brand moved into the top five and at the ten-lap mark he was the only change in the race order.

As the first fifteen laps went past and into the last ten laps, the race order began to change. At laps sixteen Mills moved past Burkett at the top end of the track with a sensational low line pass and the crowd could sense that something special might just be about to occur. At lap, nineteen Mills took the lead from Laidlaw and everybody was up and about. Burkett moved in front of Laidlaw at the same time and soon after Low passed Laidlaw also as the two exchanged positions a number of times for third.

As the chequered flag dropped Mills shot past for the win with Burkett second, then Laidlaw and Van Den Brand passing Low on the last lap as his car broke down whilst third before limping to a fifth-place finish.

After the race Mills paid tribute to his late father, his car owner Bob Callanan and his family for supporting him to win his first ever Division 2 Hot Rod state championship.

The Wingless Sprint fifty lap feature event attracted some competitors from Geelong, West of Melbourne and around Gippsland and South East Melbourne and it would be a terrific result for Jamie Mills taking the win. 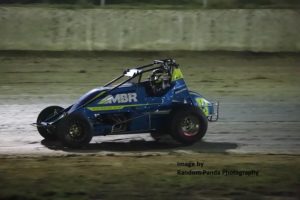 Darryl Logue the top qualifier led the race from lap one and all the way to lap forty five when disaster struck and he exited the race with a rather large amount of competitors who had blown tyres during the gruelling marathon event.  When Logue left the track David Alford hit the front of the field with five laps to go before his luck ran out and he circled the top of the track hoping to hang on to a top five spot.

Jamie Mills took the lead and won from Brett Pope who started the final in thirteenth and was the quickest car through the feature. Viv Rockliff, Wayne Logue and Michael Lovell rounded out the top five places.

In the Compact Speedcars Presidents Cup event, Louis Rodriguez was the standout driver leading into the final and he began the feature leading Brad Day and his son Jack, Mark Hutchinson and Tania Hallet. 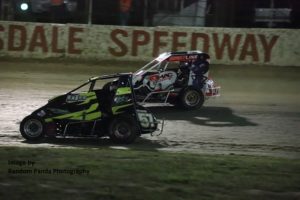 Jack passed his father on lap four and started to chase Rodriguez. At lap nine of the fifteen, Jack Day passed the leader and went on to stretch a little distance between he and second place as he roared to a Presidents Cup win from Rodriguez, Brad Day, Hallett and Mark Hutchinson. 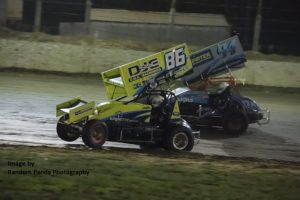 In the Sprintcar racing, Justin Barton took the win from Peter Laity, Alistair Bastian, Michael Evans and Adam Greenwood. Both Mark Laity the Victorian champion and Shane Steenholdt who were holding the top two positions earlier succumbed to damage to their cars.

Finally, Josh Thomas won the Standard Saloon final after a great battle with Simon Strang. The two had been the stronger competitors in heat racing and they went on to first and second ahead of Leigh Mitchell, Aaron Laidlaw and Kane Gibson.