Victoria’s best Modified Sedan race drivers competed at Alexandra Speedway on Saturday night as the headline class of the evening brining their troupe of ‘Tritech Lubricants’ Victorian Modified Promotional Association competitors from Mildura, Geelong, , Western Victoria, Bendigo and locally from South East and East of Melbourne and after a great thirty lap feature event, it would be Brock Atkins from Hamilton that would secure victory.

On the same entertaining programme, Lee Beach backed up his November victory at the venue in Sports Sedans with another win whilst Dylan Barrow left as the winner of two feature races, securing wins in the Speedway Sedans Australia and the Victory Speedway Council Juniors.

Six qualifying races in the Modified Sedans determined the line-up for thirty lap final and after a few seasons away from Alexandra the fans loved the action with local representation in the class including Brody Chrystie of Kinglake, Damien Miller, Ricky Cornwall of Croydon and Matt Nelson. Brock Atkins claimed victory in two of the six qualifiers starting with the first of the night before Victorian Champion Daniel Simpson won race two. Legend of the class Graham West won the third heat with Atkins the fourth before Alexandra’s own member Brody Chrystie won the fifth and then another club member Damien Miller was awarded the win in the final qualifier along with setting a new one lap track record for the class of 20.257.

From the front row in the feature event Atkins secured the early lead from Chrystie, Andrew Blackwell a two times Australian Champion. Russell Felsovary and Kye Walters the current national champion. The racing was close with everybody looking for a way up to the head of the pack. Over the first five laps the order remained the same. Felsovary made some ground, moving forward into third place as Blackwell slotted into fourth and Walters fifth by lap ten. Walters then made his presence felt as he moved into third on lap fifteen and then on lap nineteen, he charged to the front from third to first with Atkins, Blackwell, Ricky Cornwall and Chrystie the new top five. 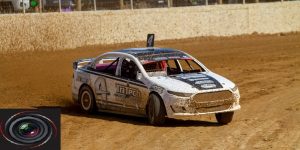 Atkins reclaimed his lead at the front of the field the very next lap as the field kept shuffling spots behind him and Miller moved into the top five. With five laps to go Atkins, Chrystie, Walters, Blackwell and Miller were the top five before Matt Gerlach moved forward to relegate Miller. When the chequered flag dropped Atkins picked up victory ahead of Chrystie who was had a strong last ten laps to lock down second from Walters, Blackwell and Gerlach.

In the supporting Sports Sedans who had a $500 cash incentive on the line for the winner of the feature, six qualifying races determined the line-up also. Tim Cole in Damien Millers Sports Sedan took victory in the first qualifier with Alexandra resident Luke Fallon taking the chequered flag in the second heat then Victorian Champion Jamie Paull in the third before Jake Blencowe won the next two qualifying races with Paull securing the last heat victory of the night.

The twelve-lap final for Sports Sedans began with Blencowe in the poll position. However, from the second row Beach took the lead on alp one with Blencowe, Fallon, Paull and Steve Akil the chasers. It wasn’t until the latter stages of the race that the top five would change with Jayde Aarts claiming a spot after starting back on row five in the final. The twelve-lap final finished with Beach winning from Paull, Blencowe, Aarts and Fallon by a comfortable margin.

In the Speedway Sedans Australia governed Junior Sedans, Dylan Barrow took a clean sweep of the nights racing winning all through heat races before taking victory in the final from James Oliver in his rookie season along with Jack Randall, Seth Sloane and Will Fallon. Barrow then secured the win in the Victorian Speedway Council Junior Sedan class after he was able to get the better of Dillon Taylor. Taylor looked the driver to beat having won here in November and Wangaratta two weeks ago, however Barrow was able to finish with the victory ahead of Taylor, Jack Yeomans, Nathalya Westwood and Abbi Garlick.

Alexandra Speedway Club is very thankful for the support provided by all these businesses in the 19/20 season: