The Speedway Drivers Association of Victoria Hot Rods known as the SDAV Hot Rods headed to Bairnsdale Speedway for this year’s Victorian Speedway Council hosted Victorian title for the classes governing body and it was a great night for Stan Marco Snr winning all three qualifying heat races on his way to a win ahead of a podium of club stalwarts that included himself, Dean West, Russell Hovey, Kali Hovey and Phil Jenkins. 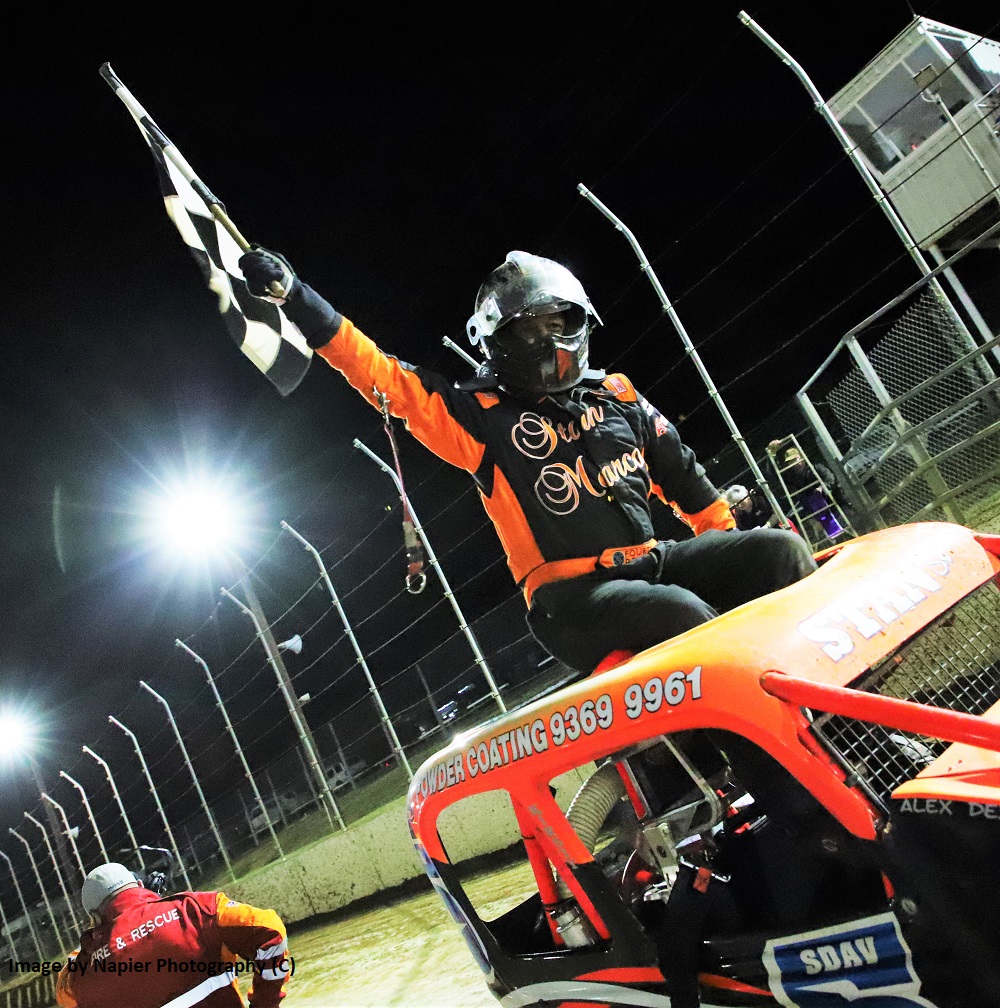 Competitors included four members of the Marco family with Stan and his lads, father and daughter combo Russell and Kali Hovey and her husband Shannon Meakins whilst Phil Jenkins and Dean West are former Victorian champions in the class who keep racing and enjoying themselves, however, do want to add another trophy in the cabinet.

Three qualifying heats began with Marco Snr winning the very first one from tenth place in the line-up after he zipped past, Jenkins, West, Glenn Lawless, Tommy Marco, Stan Marco Jnr, Kali Hovey, Meakins, Russell Hovey and Chris Wilkes whom all started ahead of him in that order.

Jenkins (#3 – SLX Custom Fabrication) led West on lap one with Tommy Marco in third before Stan Marco Jnr spun a bearing on lap two and parked infield. Marco Snr moved to fourth on lap four then into third a lap later with Jenkins leading West, Marco Snr (#5 – A1 Automotive), Kali Hovey and Meakins (#84 – Kilmore Towing & Transport) at the end of lap five. He took the lead passing both Jenkins and West the next time around and went on to win from them both and Kali Hovey in fourth, Meakins, Tommy Marco, Russell Hovey (#25 – Pizza Box Norlane), Lawless, Wilkes and Raedyn Marco (#2 – A+ Powdercoating). 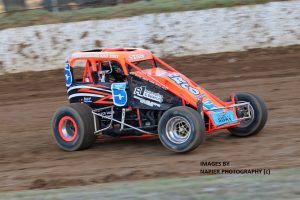 Marco Snr was some .7 of a second faster than the rest in heat one, always tricky conditions when the race track is juiced up, Marco running 16.3 during this qualifier.

Marco Snr then lined up in pole position in the second qualifier with Kali Hovey, Wilkes, Russell Hovey, Jenkins, West, Lawless, Meakins, Tommy Marco (#6 – Indy Raceparts), Stan Marco Jnr and Raedyn Marco at the back of the field.

Marco Snr continued on where he left the track after heat one, at the front of the field. Kali Hovey, Russell Hovey, Meakins and Tommy Marco trailed him across the start line into lap two. Raedyn Marco was the first car to exit the race on the first lap and on lap three Meakins past Russell Hovey before crashing into the wall and breaking his front end of the eighty-four car. 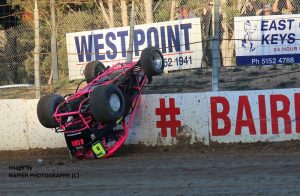 Again Marco Snr was quick and slightly quicker than he was in heat one, however West, Meakins and Kali Hovey also set very quick times in this race with Marco Snr a 16.2 this time, West 16.3, Meakins 16.4 and Hovey 16.6 all in close times of each other.

The third qualifier was the only one to go the distance without a stoppage and Marco Snr recorded2.51.160 for the ten lap distances whilst the one lap times started to go away by more than half a second a lap from the earlier previous race.

The field was set for the twenty-five lap title race and there was no doubting the front row of Marco Snr and West, then on the second it was Kali Hovey (#22 – Little Boot Cafe) and Russell Hovey then, Jenkins and Wilkes and then Lawless, Tommy and Raedyn Marco with Meakins and Stan Marco Jnr (#11 – Darby Paints) both nonstarters.

The chequered unfurled as the Marco with an eight second lead charged out of turn four and picked up another title win ahead of West, Russell Hovey, Kali Hovey, Jenkins, Wilkes (#13 – Procote Powder Coat) and Lawless.

In the long history of the Marco family being involved in the club, a Marco had never won the Victorian title until this very night. “I am here racing with my boys, with my family in the crowd and in the crew and this victory just means so very much to me and us as a family. Thank you to Bairnsdale Speedway club for supporting our club, thank you to my family and team for all your blood, sweat and tears, we are going to enjoy tonight I assure you all. To the other race drivers well done on your results and thank you for your compliments of our win.” Shared Marco.