The visiting Late Model Sedans competed with a time trial then two heats format for qualifying before running their feature event. Cameron Pearson the benchmark driver in the state won the time trial setting a new Rushworth Late Model Sedan track record with a time of 15.408 which was good enough to be .622 faster than second best Shane Belk and Will Lamb just a little further behind. 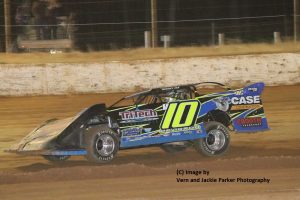 Pearson then won the first heat race from Belk by almost nine seconds with South Australian Steve Vaughan in third spot and then went on to win the second heat by the much closer margin of .875 from James Cornfoot who earlier this season won at Wangaratta. Pearson then won the feature event from Belk, Vaughan, Cornfoot and Queenslander Brett Watson. 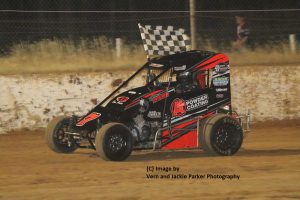 Compact Speedcar action delivered a clean sweep of three heat wins from three and a feature win to Allan Pitcher and a fast time for the night for the Compacts of 16.882 for one lap. The week previously Pitcher had to settle for second at Ballarat and without Mark Cecil in the Compacts competing Pitcher won comfortably through the evening. In the final Pitcher defeated Jamie Paull, Scott Thomson, Mark Hutchinson and Mathew Brown.

The Ladies Sedan racing seen qualifying race wins shared between three. Cassie Wicks then Chloe and Kelly Lamb all won heats with Chloe Lamb the current class champion setting a fast one lap time of 19.466. Kelly Lamb had the best start in the feature race and she held the lead ahead of Wicks and Chloe Lamb. Chloe moved into second on lap four and it took until lap 11 of twelve before Chloe took the lead she went on to win the final from Kelly Lamb, Wicks, Chelsea Hodge and Belinda Chalcraft, a great battle to the end between second and third.

Michael Wicks swept all three qualifying races in the GV Open Sedans with the first win by just .200 of a second and then winning the next by over 11 seconds setting a fast one lap time of 18.973. Come feature time Wicks however did not make it out onto the track as he ran out of time trying to rectify engine issues and the track entry gate locked before he made it and Garry Gapes went on to lead every lap in the final and take the win by just .362 of a seconds from Jay Nicolaisen who moved into second on lap eleven, Scott Smith, Darren Holt and Braiden Simmonds. 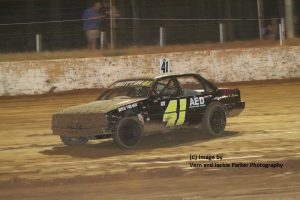 Production Sedans like the Ladies also had three different heat race victors, Ian Wilson, Troy Britton and Mark Cecil shared them with Britton completing a fast lap of 19.412. After Cecil pulled out of the final on lap three when the suspension collapsed, Britton then went on to win the final from Leigh Jeffery, Bevan Hutchins, Jaiden McCann who was penalized one spot after the chequered flag and Warren Alexander.

A small field of Junior Sedans also spread the qualifying race wins with Luke Cecil, Josh Cecil and Daniel Smith all taking wins before Luke Cecil won ahead of Smith and Josh Cecil.