Rushworth Speedway kicked off on Saturday night and the action was terrific from all classes with the AMCA Nationals joining local members in Goulburn Valley. The AMCA’s didn’t disappoint with a finish seeing the top drivers separated by the barest of margins, whilst the battles were thrilling also amongst the local classes. Wins went the way of Dean Heseltine, Adam Box, Bradin Claridge, Michael Boyle and Belinda Chalcraft.

Thrills and spills kept the stewards busy with cars losing battles with the concrete wall and others trying to get away with a little rubbing being pinged by the people with the little rule book and controls of the one-way communicator. 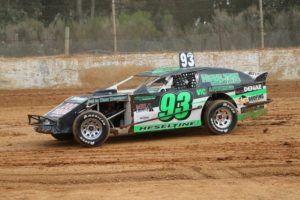 The visiting AMCA Nationals who compete with 350ci Crate engines from the US included in their line up multiple times state champion and former national champion Tim Reidy who currently has the Victoria #1 plate to his name and his closest Victorian rival, Dean Heseltine. Reidy took a win in heat one from Paul Sullivan with a margin at the finish of just .479 of a second, however things would get closer later.

Frank Thierry from Mildura then won the second heat ahead of Reidy. Thierry seems to like winning in the Goulburn Valley and surrounding areas, he won at Wahgunyah back in June. Heseltine then won the third heat making it three different winners during qualifying with a fast time of the night of 17.382 for his best lap. The final began with Reidy and Sullivan on the front row and it would be Sullivan who would lead the field past the officials on lap one. It took until lap five for Heseltine to take control with Sullivan, Reidy, Neale Peachey and Hugene Charvat in fifth.

Reidy moved up a spot-on lap six to be second. The laps wound down and Heseltine was under pressure from the state champion however fifteen laps wasn’t enough for Reidy and Heseltine got to the finish line .079 of a second ahead of Reidy, Sullivan, Peachey and David Wicks.

In GV Production Sedans new member Michael Boyle ran away with a clean sweep of results. Boyle was last season competing in the Victorian 3 Litre Sedan class based up at Swan Hill and has registered to run GV Production Sedans winning all three heats. He defeated Ian Wilson in the first, then Hutchins in both the second and third with a fast one lap time of 18.786 in heat two.

He completed the clean sheet when he led from lap one in the fifteen lap final with Hutchins and Jaiden McCann chasing before the field shuffled on lap five with Boyle leading Hutchins, Wilson, Jeffery and McCann. Warren Alexander got the better of McCann and the next nine laps ran without change to the order and a win to Boyle from Hutchins, Wilson, Jeffery the current class champion and Alexander.

In GV Junior Sedans new club member Bradin Claridge won all three qualifying races defeating his younger brother Connor in all with a fastest one lap time of 18.811 in the first heat. The eight-lap final began with Bradin leading Connor until lap three where Jordan Simmonds past the younger Claridge. Big Brother Bradin though was to strong winning by almost a full lap over Simmonds with Connor Claridge, Keiden Britton and Zach Martin rounding out the result.

The GV Open Sedans continue to regrow which is great to see and Adam Box and Paul Lamb renewed their on-track rivalry much to the delight of the crowd. Lamb took a win in the first of six heat races for the evening where Box and Lamb would compete in heats together twice. Box won the second heat race of the evening with a fast one lap time of 17.749 before the current class champion Garry Gapes would win the third race. 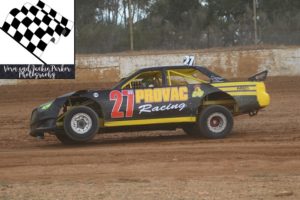 Box won the first battle with Lamb in heat four and the consistent Jay Nicolaisen won the fifth heat race securing a second row position in the final before Lamb was awarded the win in heat six despite crossing the line second to Box after the steward confirmed a penalty for Box for a little contact with Josh Beattie, it is in the records that the steward also noticed that Beattie then evened the score with Box and he also copped a whack across the knuckles.  This win for Lamb evened up the score to one all for the evening before the fifteen-lap final.

Box made quick work of assuming the lead in the feature race with Lamb, Nicolaisen, Gapes and Corey Knox the top five. Bevan Hutchins stepping into Opens after competing in Productions in recent seasons moved into fifth on lap two and the top five settled for the rest of the race. When the chequered flag dropped, Box had the win from Lamb, Nicolaisen, Gapes and Hutchins. 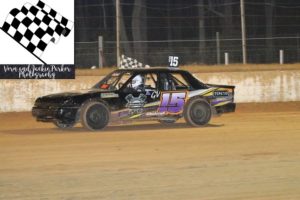 Belinda Chalcraft got her season off to a winning start with the GV Ladies Saloon win. She had to beat the second top driver in the class with last year’s winner absent and she did so by getting faster race after race, the only driver on the night to do so.

Heat one and two ended in victories before Kelly Lamb won the third heat despite Chalcraft setting faster lap times. The twelve-lap final then topped off her night with a one lap fast time of 19.896 as she defeated Lamb, Nicole Gapes, Jas Bergman and Casey Alexander completing a family double as her father also finished fifth in his GV Production final.