Redline Raceway’s season came to a close on Saturday night (May 19th) with the annual ‘Dirt Chix Queen of the Mount’ feature event for Ladies Street Stocks sharing centre stage with the Junior Sedan Promotional Association, fans left happy with plenty of action dished up and a victory to local Ballarat racer Brooke Ferguson in the Queen of the Mount whilst Jack Ramsdale and the younger sister Ferguson and no doubt future Queen of the Mount, Kasey won the Junior finals.

Ballarat and the Mount Buninyong race track avoided the threat of rain with the overcast conditions providing a juiced-up race track conducive to great passing opportunities with twenty plus ladies vying for the Queen of the Mount title.

When the green flag dropped for the Queen of the Mount feature event Brooke Ferguson shot off the start line with McDermott chasing her and Karen Ferguson in third with her hands full of Forrest and her Commodore hounding her. For a period of time the top group out front was four or five then as the laps wound down Brooke and McDermott got away before Forrest reeled them in a got amongst it with McDermott. 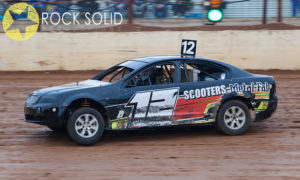 Back further Hutchinson, Roycroft, Michelle Barbeler, Jacque Whatmore, Hannah Grima and others traded places.  Ferguson kept on motoring out front and put distance between her and McDermott for the second time and flew on to the finish to win from McDermott, Forrest, Karen Ferguson and Hutchinson.

Six heat races in the Junior Sedan A Grade class finished with Mitch Glynn and Todd Moule on the front row for the feature race start after wins went the way of Todd Moule, Jade Moule, Ben Micallef, Mitch Glynn twice in succession and Kasey Garlick in the qualifiers.

Glynn had the misfortune of mechanical breakdown stop him from getting away at the drop of the green flag and he rolled on off the track and watched things unfold from the infield as Ramsdale passed Todd Moule and took off out front. As laps wound down Micallef started to get closer to Ramsdale and back further Garlick and Cornwall battled with each other for position swapping places on a few occasions. 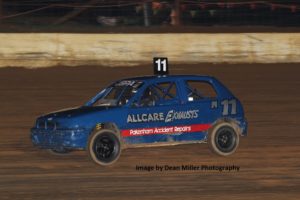 When the chequered flag waved, Ramsdale had won from Micallef, Garlick, Cornwall and Darcy Giblin. 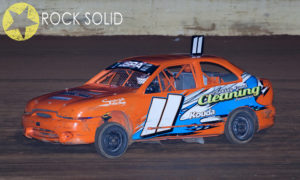 In the B Grade Junior Sedans Kasey Ferguson brought double joy to the Ferguson Racing Team with her victory. She won all three of her qualifiers with Cody Compton winning the only other before she motored on to a win ahead of Jake Hooley, Jaxon Vella, Luke Cornfoot and Linken Paterson with the boys being no match for her speed.

Other action on the night included the Thunder Sedans and Unlimited Sedans competing together with Sean Lister a local club member winning the final from Darren Nelson both drivers winning the heat races earlier then in third came Lindsay Fox followed by Darren Forrest and Wally Hucker.

The season is now finished and Redline Raceway thanks everybody for their support and they look forward to bringing entertainment to the local Ballarat motorsport community again from November 2018.

DIRT CHIX QUEEN OF THE MOUNT SUPPORT:
Thanks for Coming Goodie Bag – to all racers supported by Dirt Chix, Sportzprint, Bramleigh Estate, GJ All Mechanical, Curtis Engineering and all racers got Cup Cakes from Fergusons Plarre.