Nyora Raceway put on a sensational race meeting for its drivers and fans when they got through a packed program with around ninety competitors, the threat of fog at one stage put a scare through officials however constant racing helped the fog lift and the racing continued on with the girls shining through for both ML Automotive supported Wingless Sprint feature wins and the Compact Speedcars provided a sensational race finish, the best of the night.

Starting with the Open Wingless Sprints, four heat races were run to decide the field for the final, with wins going the way of Jordan Abbott, Bree Hall, Marc Evans and Todd Hobson. 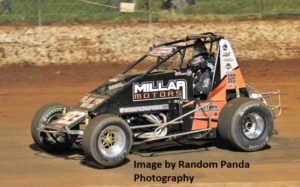 Samantha Millar then proved she can do anything her brother Travis Millar who is the Victorian champion in Wingless can do when she was able to score a great win over Nyora raised racer Todd Hobson in a great race. Evans erased the memory of a roll over at Nyora this season with a third place ahead of Michael Skene and Bree Hall back in fifth. 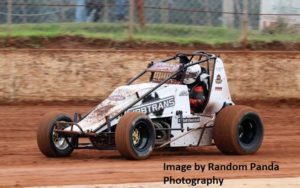 In the Ladies of the Dirt Wingless races Carly Walsh and Millar shared the two heat race wins. Walsh who has set her sights on winning the three round Ladies of the Dirt series then made a statement early in the series by taking the win from Millar, Bree Hall, Rachel Cooper and Alisha Fielder.

In Compact Speedcar action Allan Pitcher proved he might be difficult to beat at the upcoming Australian title by winning the first to heat races of four, Justin Paull won the third heat race and Louis Rodriguez whom had already finished second in the first two heat raced finally had a win in the fourth. 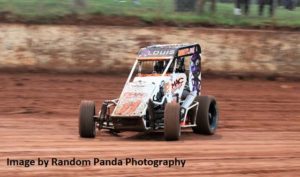 A great feature race with a finish that ended as the two lead cars crossed the line seen Rodriguez get the better of Pitcher by no more than a finger length whilst Paull cross in third with Butch Hutchinson and Ayden Elliott from New South Wales completing the top five.

Hot Rod action was by way of the SDAV Hot Rods and three heat races were shared between Tom Marco, Michael Coad and Stan Marco Jnr. A reverse grid feature race put the low point scorers to the front.

Glenn Lawless was quickest off the start and lead lap one from Phil Jenkins, Shannon Meakins, Marco Jnr and Vaughn Matthey. Meakins assumed the control of the race on lap two with Lawless handing the lead over.  On lap thirteen a tangle between Marco Snr and another racer put the two cars in the dirt, the stewards let the race continue as they believe the cars in the infield safely and would have put both to the rear of the field, this meant Marco Snr didn’t finish as he didn’t cross the line. The results were Meakins, from Marco, Coad, May, Marco Jnr, Matthey and Jenkins.

Marcus Reddecliffe won his first race for the season in Standard Saloons whilst Mark Miles won the second and third heats. Whilst Reddecliffe was competing in a former Miles car that he had recently brought, he could not get one over Miles who won the final from Reddecliffe, Shane Belk, Mark Borkowski and Gary Charles.

Rhys Lansdown, Kacey Ingram and then Lansdown again were the heat winners in the Junior Standard Saloons before Lansdown took the feature win from Kacey Ingram, Lewis Williams, Damon Ingram and Shanniiq Rowan.