The little Bullring did it again, it produced a race of attrition and a front of the field classic in the same race. 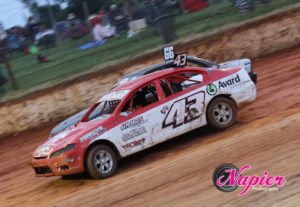 Gippsland Speedway fans were greeted by a typical door on door, paint swapping Street Stock show and it was Bendigo driver Jamie Lock who came away with the win in the ‘Shannon’s Insurance Street Stock Rumble’ with Latrobe Valley racer AJ Lawrence whom led most of the race in second and Warrick Howie from Victoria’s North East in third place.

Twenty-six drivers arrived in the South Gippsland venues pit enclosure to compete across nine qualifying races before the forty-lap feature event took place. Local representation from the host club this time included Eugene Bennett and member Russell Hill. Whilst David Barnes from the nearby Drouin club joined the series.

Round one heat race victories went to Shane Roycroft, Jason Degoldi who inherited the lead with leader Jason Duell being defect flagged whilst Lock moved up from sixth to second and then Zoe Salau whom had never competed in a Blue Ribbon Street Stock event won her first-ever heat race in a Blue Ribbon event!

In the second round, Lock took the win moving forward from fifth spot in the first heat of the round. A Crash affected many contenders with Degoldi, Lock, Russell Hill, Shane Roycroft amongst those involved and damaged. Hill’s night was done. AJ Lawrence won the next after also starting in fifth and had to pass David Barrie who looked in great touch for competition on this race night with Eugene Bennett taking a home track win in the sixth qualifier defeating Warrick Howie in a race long battle with South Australian Duell in third.

The final round of qualifying started with Lock converting a pole position start into a win whilst Lawrence from outside poll won the second heat and Shaun Henry rounded out the qualifiers with the final victory of the round. 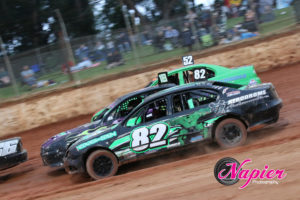 When the green flag dropped it would be Lawrence and Roycroft whom had the stronger start. Salau put her hat in the ring early in the piece, however soon herself and Bennett were chewed up by the attacking pack that included Lock, Howie, Blomeley and Barrie. Roycroft was really putting Lawrence under pressure as Lawrence chose a line as close to the poll as possible trying to force Roycroft to an outside pass, whilst Roycroft was trying to keep Lawrence under the hammer and force a mistake and allow a gap to open.

Roycroft eventually succumbed to damage and that left Lock coming from out of the pack and putting the pressure on Lawrence. Lock found a gap and took the lead; Lawrence took the lead back and then it went back to Lock. Duell had moved forward significantly and into the top five and finally Lock took the field to the finish line with Lawrence in second, Warrick Howie in third, Jayden Blomeley in fourth and Jason Duell fifth. 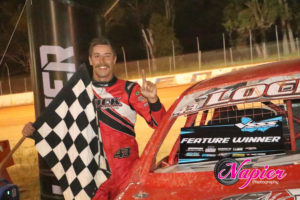 After the race Lock made comment on his victory. “Thank you to the boys in my crew who put in so much effort to make this deal work for us on race night. Well done to the competitors for supporting this regional series introducing our class to some places who rarely or never see us. Thank you to Justin and your people for all your efforts to do this for us drivers. Thank you to Nyora and their volunteers for a great night. We are excited to be in front now in the point score; however, we know there will be another challenge coming when we get to Rushworth.

Twelfth placed finisher for the final and receiving a $200 voucher from PRO 1 Race Parts was Jason Morrison.

With the worst round of five being dropped only four rounds for each competitor count. After two rounds corrected points using the best round so far are as follows:

The Victorian Street Stock Series will be in Rushworth in February for the next round.