Nine heat races in the Modified Sedans determined drivers for a pole shuffle before a thirty lap feature event delivered an event winner. 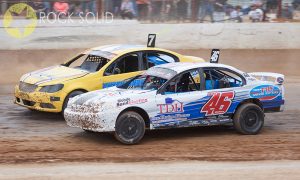 Walters a Redline club member started the night in the best possible passion with a victory in his first qualifying race and found it difficult to win another one from there, however, accumulated enough points to get into the shootout and be up the front end of the feature field.

Walters, Russel Bent, David Smith, Brock Atkins, Chris Rieck, Justin Drew, Andrew Blackwell, Matt Nelson and Matt Gerlach made the qualifying race winners list meaning that every race was won by a different competitor, showing how close the racing is in the class.

From the drop of the green flag Walters from the front row of the field mixed it up with wiley veteran Russell Bent before assuming control of the race. Behind him Nelson, Atkins and Brody Chrystie sorted themselves out, Walters took complete control after Bent excited the race and parked a broken car infield with Atkins and Nelson exchanging positions on a couple of occasions before Atkins settled in second around lap twenty.

The first ever Keith Astrella Memorial for Compact Speedcars was decided after four qualifying heat races and the feature event. Jack Day, Allan Pitcher, Australian champion Justin Paull and the eventual event winner Mark Cecil won the four qualifying events before Cecil got the better of early feature event leader Pitcher in the final to take a strangle hold on the race as Pitcher battled to keep Paull and Jack Day at bay. 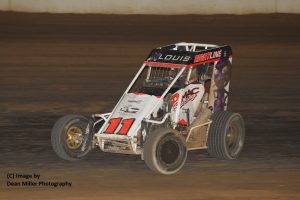 After competition crossed the finish line and some scrutineer checks were completed a couple of competitors were disqualified for measurement infringements and the top five was declared as Cecil, Pitcher, Jack Day, Brad Day and Mark Hutchinson.

Stainer and his team mate Jason Crawford shared wins in the first two heats with Perry taking the win in the third and Stainer again in the fourth. Top qualifiers start at the rear of the field in Grand Prix Midget racing and Stainer with Perry and Crawford ahead of him had a tough ask.

Perry made it to the front on lap one of the race whilst Stainer and Crawford moved into second and third on lap two. During the race the lead cars passed backmarkers with Stainer having contact with one of them which left his front left tyre punctured and starting to deflate. Whilst he was quick enough to still be second, Stainer just could not chase Perry with the speed he needed. Perry went on to win from Crawford, Mark Blackeby and Sean Denning.

Crowd favourites the Street Stocks provided support action for this meeting and the current leading competitor of the season for Redline Jason Degoldi continued red hot form as he went on to defeat Jamie Lock, Tim Hutchinson, Brad McClure and Daryl Atkinson in the final and in Standard Saloon action Ian Walsh picked up his first ever feature race win defeating Priscilla Grech and Patrick Walsh.

Racing returns to Redline on December the 15th with Sprintcars, Amca Nationals and Sports Sedans the headline events that night.