Rushworth Speedway continued its great season with another terrific race meeting on Saturday night (28th April) when the Super Sedans and the Grand Prix Midgets made another visit to the venue and Mick Nicola Jnr and Danny Stainer took the wins in both their classes’ state series rounds whilst Paul Lamb, Kelly Lamb, Lachie Fitzpatrick and Shane Hutchins won the finals for the local Goulburn Valley classes. 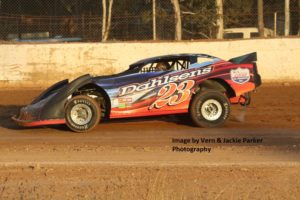 Action in the twenty lap final event came down to Nicola Jnr and Wicks whilst Nicola Snr went backwards early in the race. Jnr pressed forward with Wicks, Lionel west moved into third from lap two with Nicola Snr dropping to sixth. For most of the race there were only five drivers. Nicola Jnr recorded the win from Wicks by over five seconds with Nicola Snr finishing in third ahead of West and Ben Faulkhead.

Grand Prix Midget competition returned to Rushworth with their biggest field of the season, fifteen competitors, four heat races allowed each driver to do three heats each and wins went the way of Dennis Myers, two wins to Danny Stainer and another to Australian champion Trevor Perry.

Fifteen laps then greeted the drivers for the feature race with the lowest point’s drivers starting at the front of the field. From fifth spot on the grid, Travis Florimell made short work of getting to the front with Janelle Saville, Stainer, Jason Crawford and Rod Saville the lead five. Stainer then roared past Florimell into the lead on lap two.

On lap six a crash in turn four between Rod Saville and Lisa Chalcraft who lost a rear wheel due to contact in this crash, David Bacon and Sean Denning who rolled his car in the same crash brought the yellows on again. Florimell lost drive on lap fifteen and Perry had nowhere to go and crashed into the Florimell car and then tried to move down low in turn two as there was no drive up high and Crawford tried to do the same. 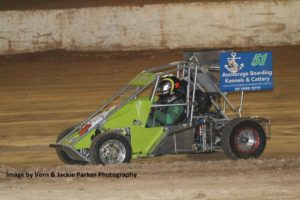 The race was declared, with Florimell whose car had broken down deemed the cause of the stoppage and the chequered was held out for Stainer who had the win from Myers, Perry, Crawford and Rod Saville.

In GV Open Saloon action Paul Lamb picked up another well earned victory in a hard fought finish to the race winning by just .441 of a second ahead of Thomas Conboy who is incredibly close to picking up a victory over Lamb, the big question is will it happen this season before it is all over. Brad Simmonds lead the first couple of laps before Lamb moved to the front, Conboy moved into second by lap four.

Both Lamb and Conboy were carving up the track circulating in the 18 second per lap to low 19 second bracket, Conboy was faster in the latter stages of the race, Lamb’s best time was 18.354. Mikey Naismith crossed the line a further five seconds back in third with Brad Simmonds and Garry Gapes rounding out the top five.

Lamb won the first heat of the night and the second with Brad Simmonds picking up a win in heat three before Lamb went on to take the victory in the final.

Action in the Ladies Saloons was terrific with a small field. Chelsea Hodge picked up another heat race victory with a four second win in the first of three qualifying races, Kelly Lamb then won the second is the closest of margins just .043 of a second ahead of Chloe Lamb and Hodge book ended the qualifying races with another win in the last heat in another close finish of just .275 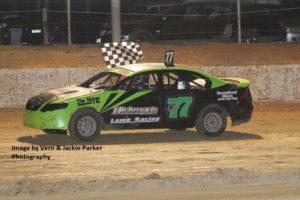 Hodge didn’t have things her way in the final event though with Kelly Lamb leading from the start. Felicity Roycroft who on the weekend was racing at Nagambie during the day and then headed over to Rushworth to compete moved ahead of Chloe Lamb into second on the first lap. Chloe Lamb dropped to last mid way through the race before starting her recovery. Kelly Lamb still led Roycroft before Chloe Lamb caught and passed Roycroft on the final lap to snaffle second place. The top five across the line was Kelly Lamb, Chloe Lamb, Roycroft, Hodge and Maddie Naismith, Chloe Lamb was the fastest racer with a 19.683 lap in the final.

With a big car count the Production Sedans had to spread their field across four heat races with each driver competing in three. Troy Britton started his night strongly with a win in the first qualifier and Geoff Lee picked up the second ahead of the Hutchins lads Bevan and Shane.

Lee backed up the win with another in heat three whilst Shane Hutchins won the last qualifier. In the feature race Lee couldn’t keep the momentum going as he was unable to pulling out on lap twelve whilst one of the fastest drivers on track.

Lee led the race early from Shane Hutchins and Leigh Jeffery back in third. On lap six Jeffery moved ahead of Hutchins.  On lap twelve as Lee moved out of the race Jeffery led for one lap before Hutchins moved into the lead. Ian Wilson secured third with Chris Woeltjes in fourth moving into that spot late in the race with Bevan Hutchins finishing fifth. Shane Hutchins was fastest with a 19.292 second lap.

Lachie Fitzpatrick sorted out his mechanical issues that curtailed his likely victory at Alexandra last weekend and came out swinging winning all three qualifying races on his way to a pole position start in the Junior Sedan final.

Fitzpatrick got faster as the night went on and in the eight lap final set the night’s fastest time for the Juniors of 18.656 for lap and he led to the finish line Tristan McGraw, Luke Cecil, Daniel Smith and Jordan Simmonds.

The next event at Rushworth is May 12th with the Australian Compact Speedcar title to be held and the Pollard Memorial for 3 Litre Sedans along with all the local classes.

The Goulburn Valley Auto Club would like to thank the following supporters: