Locals are very passionate about the Benton Memorial in honour of Paul Benton a former club President who had left his mark on those that had met him. Race drivers who compete at the track on a regular basis, with a qualifying system requiring drivers to run at three other club events since the proceeding memorial, can only compete in the race in his honour.

Six heat races pitted Open Saloons against Production Sedans and five of the six heat race victories would go to Open Saloon racers with Michael Wicks beginning the night with a win over the eventual race winner Roycroft in heat one by just .172 of a second.

Troy Britton was the only Production Sedan to collect a qualifier win in heat two before Paul Lamb, Jay Nicolaisen, Wicks again and Lamb again completed the qualifying results. Roycroft again finished a very close second in his last heat behind Lamb by just .581 of a second, in a race where Lamb put down the fastest race lap of the night of 19.911; Lamb only took the race lead on lap seven of ten when he passed Roycroft.

In the all-important twenty five-lap feature event supported by Mota Care Bendigo, Nicolaisen was the early leader of the race right from the start. Roycroft slotted into second before Leigh Jeffery in a Production Sedan and Wicks slipped on past him. 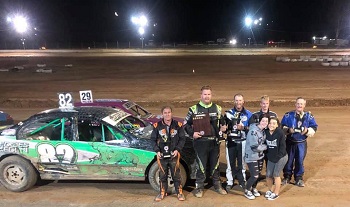 From lap eighteen it was Roycroft from Jeffery and at the finish line those two were one and two with Shane Hutchins third, Britton fourth and Neil Johnson in fifth all in Production Sedans also. Roycroft won by almost four seconds from the second placed Jeffery.

The visiting Grand Prix Midgets had a handful of New South Wales registered competitors in the line-up on Victorian title night supported by Super Balance Shepparton. Many drivers had their chances or looked the goods during the racing before things curtailed their march to the finish, and Saville made the most of that opportunity to pick up a great title win from his own daughter Janelle.

The punters tip for the overall win Trevor Perry won the first qualifier by more than ten seconds and the writing was clearly on the wall for everybody else. Things did not change as far as results were concerned when he won heat two also, however people took notice of second placed Chris Fowlers result at finishing only 1.190 behind Perry.

Fowler won the third heat, the heat in which Perry was not scheduled to compete in by a large eight seconds ahead of the eventual second placed Janelle Saville and local legend Dennis Myers amongst others before Perry won the fourth qualifier, again by ten seconds.

The title race began with Fowler getting the better of Perry and taking the early race lead. Perry was fast behind him clocking 17.650 on lap five whilst in second as the top three Fowler, Perry and Myers sizzled around Rushworth in their 1000cc machines.

On lap eleven, Perry exited the race and Myers moved into second, on lap twelve Fowler also left the racetrack as his car let go and Myers was in the lead and another Victorian title to his many others he already has won looked good. 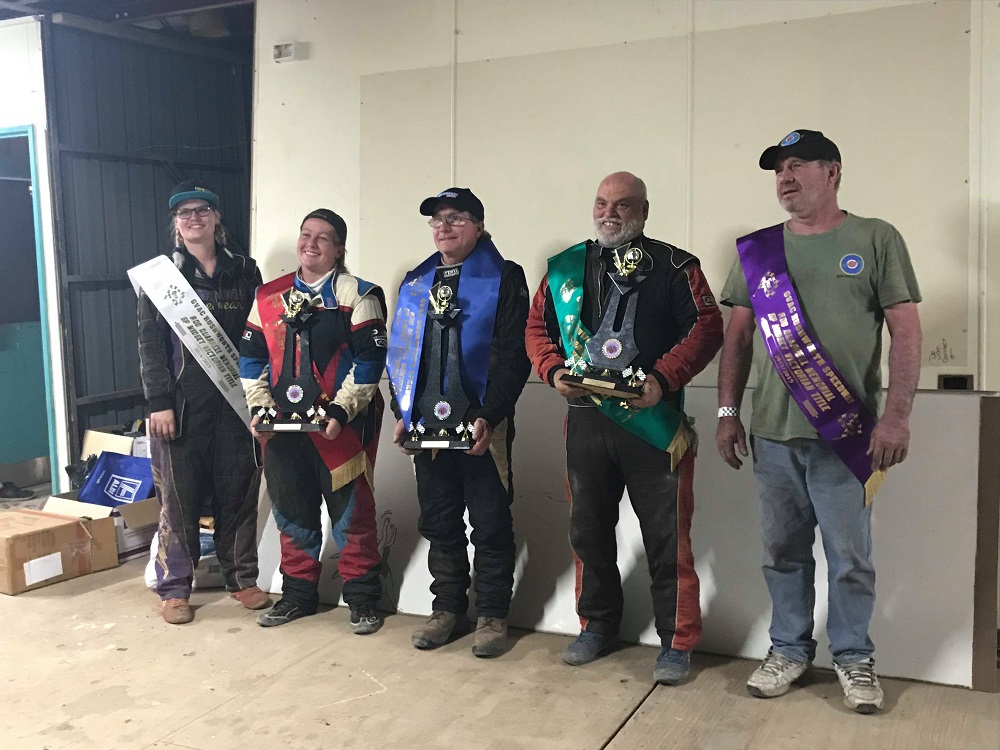 However mechanical issues caught Myers on lap eighteen and Rod Saville who had made a gradual rise from towards the rear of the field to the front took the lead for the last two laps of twenty and went on to win from Janelle Saville, David Bacon, Lisa Chalcraft and Mark Blackeby.

Also visiting were the 3 Litre Sedans for a point score event for the class and once again Lennie Clark who has proven time and again that he loves winning at Rushworth would take the feature race win.

He defeated Shane Simpson from the nearby Nagambie club with Jason Ahearn third, Andrew Robl fourth and Terry Nash in fifth place.

In Ladies Saloon racing Chloe Lamb won heat one, two and then three and was well on track for a perfect night. However, the team at Wicks Racing had other ideas and Cassie Wicks came out for the final and lead right from the start of the race. In the closest finish of the night just .079 separated Wicks and Chloe Lamb with Kelly Lamb third, Belinda Chalcraft fourth and Chelsea Hodge in fifth place.

In Junior Sedan action Tristan McGraw won the first qualifier before his night went sour. Lachlan Fitzpatrick then won heat two and three and then the final from Daniel Smith, Josh Cecil and McGraw with four finishers only at the line.