The Grand Prix Midgets Victoria Club headed back to Nyora Raceway for the second time this season with the South Gippsland Shootout up for grabs and a quick little contingent of racers lined up to claim the win, the feature event was a tough event with Australian champion Trevor Perry eventually running down Lisa Chalcraft to claim the win. 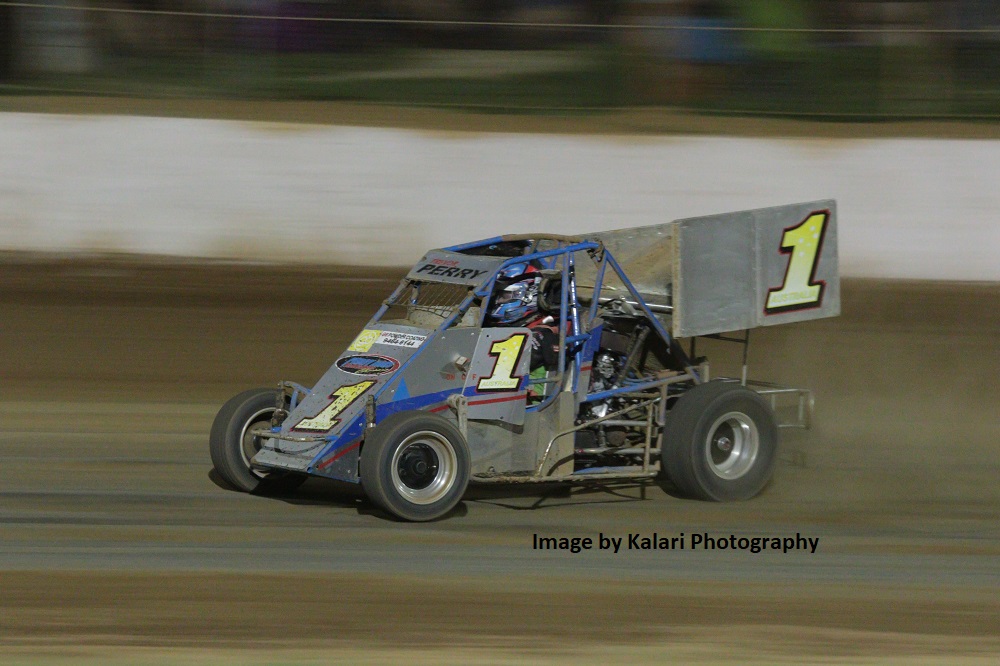 Competitors raced in three qualifiers in the latest event where points contribute towards the ‘Ballistic Performance Parts’ Masters series and the results of the heats also determined the feature race line-up.

In the first of those Travis Florimell assumed early control over Jason Crawford (#50 Anchorage Boarding Kennels & Cattery – Yamaha) with Shawn Ward in the mix also. Behind them Chalcraft, Perry and Chris Fowler were in their own little battle before Ward exited the race and Perry and Fowler got by Chalcraft (#15  Jacobson’s Transport – Suzuki).

The ten laps were zipping through and on lap seven of those Crawford passed Florimell and those two finished one and two with Perry, Fowler, Chalcraft and Troy Buis the finishers. Brandon Turner was unable to start with the carbies on the engine flooded and Mark Blackeby (#10 Kyabram Steel Fabrication – Yamaha) broke a rear torsion arm during the race and did not finish.

During the break between heats the Chalcraft team realised they had stripped the studs on the left rear wheel and as a result they did not make it back out for heat two.

In heat two Perry began at the front of the field and got away quickly with Florimell (#81 TM Lineboring & Engineering – Suzuki) the initial chaser followed by Crawford, Shawn Ward and Fowler. Fowler passed Ward on lap two. Crawford moved into second on lap four, whilst in fourth on lap seven Fowlers race ended as he spun and got crunched by the following Ward (#37 Whisper Trailers – Yamaha), Fowler could not re-fire the car with the throttle stuck. Perry held the lead from start to finish to win from Crawford, Florimell, Ward, Buis (#5 Pitstop Mowers – Yamaha) and Turner.

Fowler in heat three started at the front of the field and led lap one with Shawn Ward, Crawford, Perry and Florimell in the top five whilst at the back of the field Andrew Ward (#88 Fry’s Service Repairs – Suzuki) finally had a start. Crawford assumed control of the race on lap three when he moved out to the lead and it took until lap four for Perry and Crawford to move past Fowler.

Shawn Ward hit the front straight wall half way through the race and flipped his car onto the roof whilst his brother Andrew was having engine issues with the Suzuki powered 88 car. At the chequered flag Crawford defeated, Perry, Florimell, Fowler (#13 Ballistic Performance Parts – Suzuki), Chalcraft, Blackeby and Buis.

Fifteen laps awaited the competitors for the final with the top qualifier to the rear in line with the Ballistic Performance Parts series rules. Blackeby, Chalcraft, Fowler, Buis, Florimell, Perry, Turner, Crawford and Andrew Ward was the line up with Turner and Ward towards the back as rookie race drivers.

The green flag dropped and Chalcraft led Florimell, Perry, Buis and Fowler on lap one with positions shuffling quickly in the line up as Crawford and Blackeby both passed Buis and Fowler. On lap four Florimell and Crawford collided in turn one as both battled for third and fourth, Florimell was penalised to the rear of the field for a restart.

Chalcraft continued on her way in the lead from the restart with Perry trying every which way to get around her with all options protected vigorously by Chalcraft. It took until lap eight for Perry to assume the race lead with Chalcraft, Crawford, Fowler, Florimell, Blackeby and Buis all behind him.

Crawford struck issues in the latter part of the race and Fowler moved into third place as Crawford tried to hang on. At the chequered flag Perry took the win from Chalcraft, Fowler, Florimell, Crawford, Blackeby and Buis, the steward’s penalised Florimell back two spots to have him finish just ahead of Buis.