Grand Prix Midget racing returned to Redline Raceway on December the 1st with another victory going the way of Trevor Perry whilst the Victorian Club endeared themselves to race fans with a meet and greet type session and some giveaways at interval with adults and children alike very pleased to get up and close to their racing heroes.

Four heat races through the night determined the start line up for the Ballistics Performance Parts Masters series feature event at the end of the evening where Danny Stainer qualified as the top point’s earner through the heats and therefore started the final from the rear of the field in the final as per current Victorian club rules.

The green flag sent the field on its way and Stainer led Fowler, Perry, Florimell and Blackeby on lap one before an Andrew Ward’s (#88 Huntsmen Products – Yamaha) spin on lap three halted the race.

Denning moved into the top five passing Blackeby on lap six as the race drew towards an end, however Blackeby gained the position back on the very next lap as he re-passed Denning and Crawford passed he and Denning to move to fifth.

Stainer (#51 Abba Boarding Kennels and Cattery – Yamaha) claimed victory from Perry who passed Fowler on lap eight, Florimell finished fourth with Crawford, Blackeby and Denning rounding out the field. Shawn Ward didn’t finish due to fuel pressure concerns whilst Fowler began to have steering issues affect the handling and performance of his car.

Troy Buis (Rock Solid Productions – Yamaha) and Lisa Chalcraft began heat two from the front row, their first race of the night with Crawford, Denning, Fowler, Florimell, Andrew and Shawn Ward lined up behind them.

Crawford made short work of reaching the front of the field taking the lead on lap one with Chalcraft, Fowler, Denning and Shawn Ward (#44 Whisper Trailers – Yamaha) rounding out the lead five on lap one. It took until lap three; however Florimell passed Ward to move into fifth before passing Denning a lap later to move into fourth.

On lap seven Florimell moved ahead Fowler for the third place as Fowler pulled out of the race and the charge continued for Florimell when he claimed second place on lap eight the last of the heat. 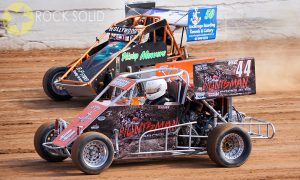 Calamity on the pre race roll around laps when Andrew Ward made contact with Buis riding his left rear wheel and breaking his own front axle. Ward mentioned to the crash crew he had no brakes whilst the demise of Fowler during the race was down to a broken steering.

Shawn Ward had the pole position start in heat three with Perry, Blackeby, Florimell (#81 TM Lineboring – Suzuki), Buis, Stainer and Chalcraft completing the line up. Perry as expected led lap one with Stainer quickly pressing forward to second place with Florimell behind then Blackeby and the pole sitter Ward.

Chalcraft passed Ward on lap three, however a couple of laps later she retired from the race as did Ward again suffering with fuel pressure concerns. Chalcraft’s car threw a chain and whilst she was being removed from the race track, her car suffered damage to the driveline and her evening of racing ended there. Florimell also threw a chain on lap seven and Perry (#1 Perry Bros Chassis – Suzuki) went on to defeat Stainer, Blackeby and Buis.

Closing out the qualifying Denning started in pole position with Blackeby (#10 Kyabram Steel Fabrication – Yamaha), Crawford, Stainer, Buis and Perry the line up for the fourth qualifier. Stainer led lap one from Crawford, Denning, Perry and Blackeby before Buis passed Blackeby on lap two.

On lap three Perry moved into third relegating Denning back to fourth with Buis exiting the track on lap six as his engine started to misfire. The chequered flag dropped and Stainer picked up a second qualifying race win from Crawford (#50 Pitstop Mowers – Yamaha), Perry, Denning and Blackeby. Crawford and Perry for several laps had a terrific battle for second and third, with Crawford getting the better of the fight.

During the interval the Victorian Grand Prix Midgets club and their media representative Dean Thompson from DMT Sports Media took the roaming microphone into the crowd to give away some posters and club t-shirts giving fans the chance to meet and greet drivers and get their promotional items signed by the drivers.

John Fowler the club President used the opportunity to share with potential drivers how they could get in contact with the club and Stainer, Chalcraft and Florimell spoke about how their evenings racing was going.

It was then feature time.

Shawn Ward, Buis, Denning (#52 AR Fencing – Yamaha), Blackeby, Crawford, Perry and Stainer lined up for the feature event with the top qualifiers needing to work through the field whilst Florimell who would have been in the line-up dropped a chain on the dummy grid and did not enter the track. It turns out Florimell wasn’t aware that he had bent the roller bracket in his previous heat race and as a result this knocked the chain off as he headed to the dummy grid.

When the flagman waved the field away to start the feature event Perry wasted little time assuming position at the front of the race with Blackeby, Stainer, Shawn Ward and Crawford the top five. Stainer and Crawford moved up to second and third on the next lap and Denning moved into fourth with Blackeby sliding back to fifth and Ward out of the race again unable to resolve his fuel pump concerns. 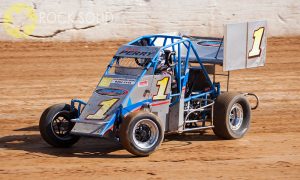 Perry, Stainer and Crawford cleared away from everybody else and eventually, Blackeby settled in front of Denning in fourth. Passing some back markers Stainer connected with Blackeby and his front left tyre started to deflate, this curtailed any real challenge on Perry who bolted to a big victory from Stainer, Crawford, Blackeby, Denning and Buis.