The Victorian Grand Prix Midget Club returned to Redline Raceway in Mount Buninyong for the latest round of the Ballistics Performance Parts Masters series and it would be Trevor Perry who would come out the victor at the end of the evening after a great nights racing. 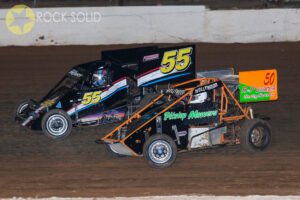 Along with Perry, the meeting had attracted rookie Alex Myers, Chris Carr, Travis Florrimell, Chris Fowler and Jason Crawford amongst the entries.

Crawford did not make it past the roll around lap and later discovered he had ignition issues that needed some attending too. Quick out of the blocks was Florrimell from the third-row leading lap one from Blackeby, Fowler and Myers. On lap three Fowler passed Blackeby and a lap later Myers did the same thing. Nothing changed in the order until lap eight when Myers picked off Fowler to take second behind Florrimell with Fowler third, then Carr, Blackeby (#10 – Spitfire Restaurant and Bar – Yamaha), Buis and Brown.

Lining up for competition in heat two Florrimell backed up his heat one win with a pole position start. Myers, Carr, Buis, Blackeby, Brown, Fowler, Crawford and Perry all lined up behind Florrimell.

Lap one got underway and Florrimell led Carr, Fowler, Myers and Blackeby around for the first of eight scheduled laps. Myers passed Fowler on lap two, the race continued from there with the field getting around quickly. On the final lap it all happened. Crawford (# 50 – R & P Stainer Grinding – Yamaha) moved forward to fifth which was soon fourth after official decisions had declared Florrimell a non-finisher whilst Fowler passed Myers. 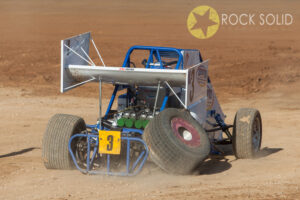 Things went pear shaped for Florrimell whilst leading. He washed a little high in turn two and opened a gap for Carr to try to work through. As the two got to turn three they touched wheels and Carr rode up over the left rear as Florrimell spun deeming him the primary cause of the stoppage. As Carr (# 3 MowPro – Suzuki) landed on the track again, he broke the right rear axle and rose joints and kept driving across the finish line for his first ever heat race win. Fowler finished second then Myers, Crawford, Blackeby, Perry, Brown and Florrimell. Buis did not finish due to a faulty coil.

The final qualifying race of the evening was started with Buis leading out Crawford, Fowler (# 13 – Wow Facta – Yamaha), Myers, Brown, Florrimell, Blackeby and Perry to go for another eight lap stoush. Crawford took control of the race on lap one from Florrimell, Fowler, Buis and Myers. Brown (# 88 – 1 Stop Property Services – Suzuki) pulled infield around lap three due to engine concerns and on lap four Perry passed Myers into fourth.

Contact between Fowler and Perry on lap five resulted in Fowlers car to stall and come to a stop. On the final lap Perry passed both Crawford and Florrimell (# 81 – TM Lineboring – Suzuki) and took victory with Florrimell second, Crawford in third, then Myers, Fowler and Buis. Blackeby did not start the race due to injector issues.

With a reversed grid start for the final Buis would line up in the pole position with Crawford, Fowler, Myers (# 11 – Automotive Super Balance – Suzuki), Florrimell and Perry at the rear. The first attempt was not the greatest of starts as Florrimell made contact with Buis and ripped the side of his wing off and that slowed him down, so we did it all over again. Ten laps would be the distance for the final event and Crawford shot to the lead with Fowler, Perry, Buis and Myers rounding out the top five on lap one.