The Grand Prix Midget Club of Victoria headed to Rushworth for its latest round of Ballistic Performance Parts Masters Series action with an increasing local field on the back of new members ensuring an interesting little battle would occur. Chris Fowler was favourite going into the event whilst Team Chalcraft were left without their driver due to being stuck in New South Wales due to bushfires, so club legend Dennis Myers stepped in to race against amongst others, his own son in his own car.

The field took off with Brown crunching the wall on lap one, ending his race, Denning led Buis, Crawford, Fowler, Dennis Myers, Stanley, Carr (# 3 Mowpro Repair Service – Suzuki) and Alex Myers on lap one. Crawford took the lead the next time around and it took until lap five before there were any other real changes, Crawford led Buis, Fowler, Dennis Myers and Denning on lap five and that is how things would stay through to the finish with Alex Myers sixth and Stanley in seventh. Brown’s (#88 – Suzuki) damage included the Jacob’s Ladder and front axle finishing his night and Carr potentially with a fuel issue didn’t finish either. 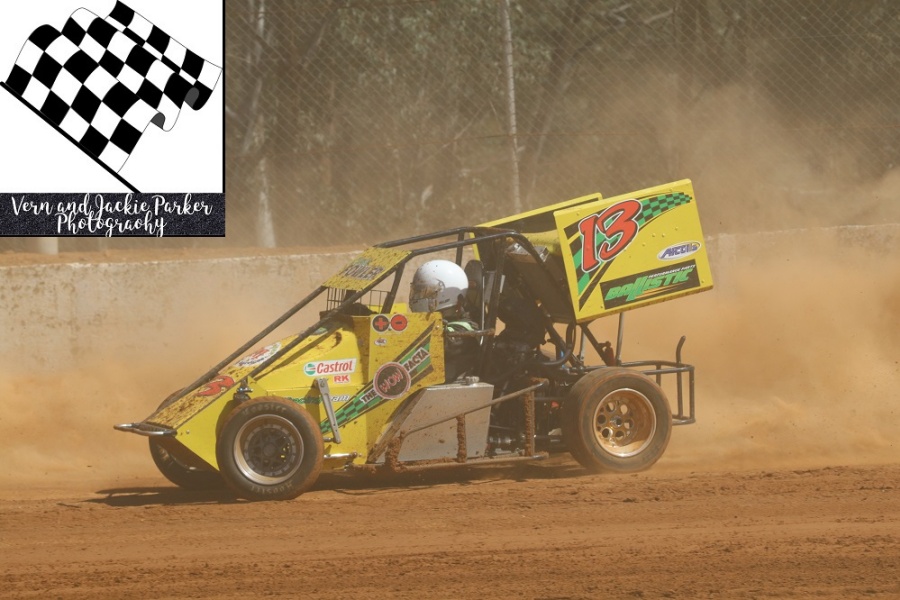 Fowler led the first lap of heat 2 with Crawford (# 50 Pitstop Mowers– Yamaha) chasing and Buis with a good start in third ahead of Denning and Carr. Alex Myers charged forward into third on lap three whilst a lap later Crawford pulled infield moving Myers into second. Things remained constant from there with Fowler defeating Alex Myers, Buis, Dennis Myers (# 15 – Suzuki), Stanley with Denning and Carr one lap down. Crawford’s exit appeared to be power flow issues; the team is still trying to pin-point the issue.

At the start of the third heat Fowler again led the field with Crawford managing to slot into second ahead of Denning (# 52 Pitstop Mowers – Yamaha), Buis and Dennis Myers. Alex Myers charged forward on lap two and he took third spot passing his dad, Buis and Denning on his surge forward. Things went smoothly from there and at the chequered flag, Fowler had defeated Crawford, Alex Myers, Denning, Buis, Stanley (# 78 – Suzuki) and Carr. Dennis Myers parked the Chalcraft car he was competing in with electrical issues and Buis (# 5 – Yamaha) finished the race however had stripped the thread (spline) on the axle and finished with a broken rear wheel, his night was done.

Crawford had the best of the start leading Fowler (# 13 The Wow Facta -Yamaha), Denning, Alex Myers and Dennis Myers on lap one. On lap four Fowler took the lead and then Denning on the next time around broke his front-end parking it backwards in turn 2, whilst in the same spot, Alex Myers (# 11 Super Balance Automotive – Suzuki) backed it in hitting the wall also. Myers tried to restart however found the forward throttle cable was broken and parked the car both drivers were eliminated.

Fowler then led the next four laps and went on to win from Crawford, Dennis Myers and Stanley. Carr was unable to start due to a broken rear end bolt and a damaged wing.