Drouin Speedway had a fantastic start to the new season when a huge crowd turned out to watch the popular Crash and Bash category competing in the ‘War on Wheels’ event. With a healthy twenty-five cars doing battle, Officer based racer Dale Morrison finished with the victory after electing to start the big race last in the field in order to be paid a few extra dollars to entertain the crowd.

Jake Young, Dale Morrison and Tim Cole won first round qualifying races with Morrison, Cole and Jason McKendry winning the second round events. In the final round of qualifying Matt Haby, Jake Young and McKendry picked up the first place points. 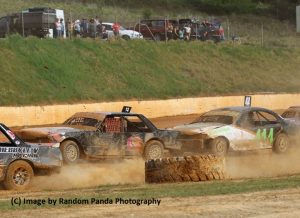 Young and Morrison had equal qualified on points so a check of the transponder timing system determined the fastest lap between the two being Morrison. Morrison was given the option to win an extra cash bonus from Pakenham Towing and Bruce Bullard a life member of Drouin who wanted to be entertained by encouraging Morrison to start rear of the field and try and win the race, and Young decided to start rear of field also just for the fun of it.

Thirty laps was ahead of the field in the final and McKendry was quick out of the blocks as Young made the best start from the two from the rear quickly moving into mid pack of the field and then soon after into the top half dozen with Morrison by then in the middle of the field.

McKendry got hit in the dog leg section around about a third of the way through and as he continued on he missed the timing loop putting himself a lap down despite to the crowd looking like he was still out front of the field.

Caution periods gave stewards a chance to make a decision to try to give McKendry a lap back by moving him out of the front of the field and to the tail of the field. However he still did not cross the timing loop and that plan did not work, McKendry laughed about it after the event when he found out he still came in fifth place!

Young exited the race around the half waypoint whilst his old man Steve continued and put himself in the frame at the front of the race. Morrison took over the lead, Richard Lewindowski continued to circulate whilst the big hitters did not realise Lewindowski was actually a challenger for the win. Brad Warren who had the lead spent a lot of time in second and got whacked and back into the race was thereabouts also.

When the race ended, Morrison took the win from Lewindowski, Steve Young, Warren and McKendry and Morrison sent the crowd home happy with a few donuts and a burnout on track.

Amanda Bullard was dominant in the Ladies Standard Saloons winning all three qualifying races and the final, whilst Bullard won every race Kate Stuchbery kept her honest ready to take the lead if the chance arose. Stuchbery finished second and rookie driver Molly Johnson finished third in her first ever final with Erin Mitchell fourth. 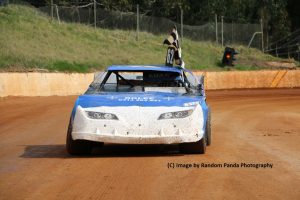 In Junior Standard Saloon racing Deegan Benson had a great day racing with his good mate Jack Yeomans and he went on to win the final from Yeomans and Harry Cecil a rookie competitor. In Open Sedan racing where Sports Sedans and Unlimited Sedans mixed together Peter Cox and Rob Bushell Jnr drove their Unlimiteds to first and second in the final with three Sports Sedans in the next three places, Gavan Dorain, Troy Glassborow and Bruce Bullard. 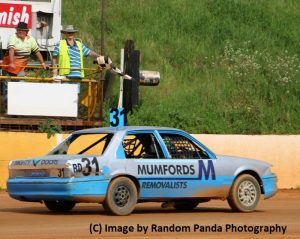 In Standard Saloon racing the feature race was actioned packed as Leigh Gooding and John Watson exchanged the lead between them before Watson’s car sustained damaged and finished infield. Gooding was penalised not once but twice during the feature by the steward with the first penalty being placings and the second being a rear of field start, both for contact incidents. Eventually Luke Capek had the lead and he looked strong for a number of laps before Andy Evans drove straight underneath Capek for the win out of turn four on the very last lap when Capek pushed high on the track. It was Evan’s first final victory and Capek took the second place with Kane Gibson, Leigh Gooding and Andrew Morris rounding out the top five.

The Vintage category of the Ace of Spades club also were popular in their demonstration events with Mark Cowin, Roger Morrow and Dennis Hocking, in particular, showing some speed from classic speedway machines.

The next event at Drouin Speedway will be November the 11th with all club classes joined by the first round of the West Gippsland Wingless Sprint Series and the Mini Sprintcar club.