Drouin Speedway club officials and volunteers are pretty proud of themselves after pulling off the near impossible on Sunday under the constant threat of rain by holding and completing a full race meeting in between small showers and having the meeting completed before a big downpour at 4:30 pm, the Ladies Standard Saloon feature was completed with Hayley Hutchins winning whilst the Wingless Sprints feature was won by Scott Irons.

Wingless Sprint action returned for the second time this season with a handy field of ten competitors to do battle, including a few newer drivers looking for track time. Three heats were run first with local member Mick Lovell winning the first then Scott Irons winning the next two.

Lovell would not make the feature race as he flipped over and over in the third heat across some of his competitors cars before landing upside down, the car sustained enough damage to put him out of the day however the car is repairable. 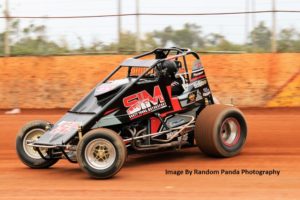 Irons was too strong in the feature race of fifteen laps leading from start to finish to win from Ricky Mills, Neil Grey, Steve Loader and Mark Hunt. 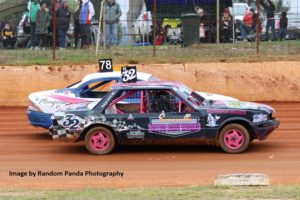 The Ladies Standard Saloon feature with support from Soothing Body Massages and Crystals and Haze Hair by Design in Drouin was run and won by Hayley Hutchins who was all class during the day winning all three heat races before dominating the feature race. Some tremendous results behind her in the final race with Ashleigh West who could not have done much if any dirt racing prior to the day finished second with Kate Stuchbery, Rhiannon Skews another new driver and Erin Mitchell rounding out the top five. 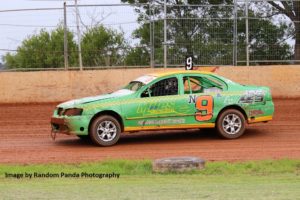 In Standard Saloon action for the Open Standards, Marcus Reddecliffe won all three of his heat races before winning the feature event. Mitch Blencowe won the only other heat race with Reddecliffe then leading start to finish in the final. He got away to a large lead before Blencowe got closer at stages, however never looked pressured enough to lose the race and won with Leigh Gooding in third behind Blencowe, fourth was Leigh Mitchell with Mick Coomer rounding out the top five.

Sports Sedan racing was dominated by Troy Glassborow who won all three qualifiers then took the win in the final from Scotty Smith, Matt Sgroi, Codey Millican and Anne Angus.

Alan Stockdale is having a great run in Unlimited Sedans having picked up a few feature race wins of late and did it again at this race meeting after winning all the qualifying races and then taking first place ahead of Mick Evans, Jamie Angus, Harley Stockdale and Daniel Angus in the final.

Rounding out all the results with the Junior Standard Saloons there were three different winners in the heats with Rhys Lansdown, Jack Yeomans and Deegan Benson sharing those results before the final race finished with the current Victoria two ranked racer Lansdown winning from Yeomans, Lewis Williams, Deegan Benson and Natalyah Westwood.

Drouin Speedway returns for their final race meeting on June the 3rd with the annual Demolition Derby event.