The Drouin Speedway Clubs last event before Christmas was enjoyed by a happy family crowd on Sunday with some headline racing from Standard Saloons, Unlimited Sedans and Ramp Racing Cars with Bunyip racer Travis Evans winning the Standard Saloon Eliminator Cup, Peter Cox winning the Unlimited Sedan Prelude to the title and Sharna Hurst taking victory in her debut in the Ramp Racing class, in fact it was her racing debut full stop. 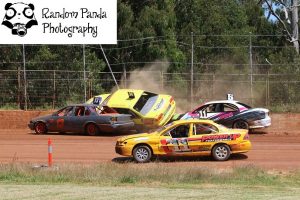 The field for the Leigh and Anne Gooding financially supported Standard Saloon Eliminator Cup was large enough to see three heat race qualifiers each round with the nine qualifying events being won by Leigh Gooding from Neerim, Steven Danks, Travis Evans, Jeff Blencowe of Bunyip, Mick Coomer, Russell Hill, Gooding, Blencowe and Coomer all for a second time.

Blencowe and Coomer started the final from the front row with the final a twenty-eight-lap event over three segments of eight, eight and twelve with drivers switching direction each time and drivers being eliminated.

All the hard work in the qualifying by Blencowe and Coomer unravelled when Blencowe was sent rear after it was deemed his muffler dropped off the race car whilst Coomer spun himself out of a top position. Brendan Eames and Russell Hill were amongst the first four eliminated when Eames slammed the wall hard and in drifting down to get off the track, Hill coming off turn four at full noise was left with no were to turn and slammed into the Corowa car.

In the second eight lap segment were Leigh Gooding held the lead a little while he became another of the fancied competitors to leave the event with a flat tyre and Hanna Domburg a fan favourite female who could have made it into the last eight, elected to pull out with mechanical issues.

The final eight amazingly included Blencowe and Coomer whom where at the back of the field in the first part of the race and a terrific performance from Wayne Gibson who is still a developing racer made the final eight. 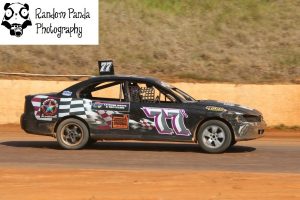 Travis Evans who spends many hours involved in track maintenance took control of the race and was pushed hard by Bendigo’s Sean Connolly, however it would be Evans who would take the win which also doubled as a Victorian Standard Saloon Super Series event from Connolly, Coomer, Stephen Douglas, Blencowe, Gibson, Victor Benson and Kane Gibson.

In the one and only pre-Victorian title event at the track for Unlimited Sedans a healthy field of a dozen competitors made the trip to Drouin. Qualifiers finished with three different heat race winners. Daryl Nicolson a Drouin member, Peter Cox and Johnny Young. 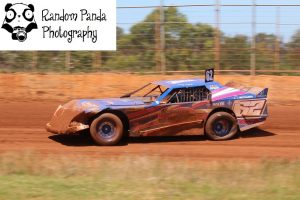 In the feature event Cox jumped out to a quick lead and had pressure early from Young who had just defeated him in the final heat race. Young succumbed to pressure from Nicolson who attempted to drag Cox back to him. However, Cox had everybody covered and went on to win from Nicolson, Young, Daniel Unternahrer and Warrick Taylor.

In the Ladies Standard Saloons Tahlia Campbell was able to defeat Jemima Borkwoski, Kate Stuchbery, Natasha Curtis and Sharlene Laidlaw in their final whilst in the Junior Standard Saloons the official result was Jack Yeomans the winner from Owen Cecil, Nathan Drew and Kaine Smith and Chloe Coomer.

Ramp Racing action where cars must touch a ramp on each side of the track on each lap to be recorded as a lap, had attracted Travis Evans, Leigh Mitchell, Mick Ramsdale, Darwyn Lee and Sharna Hurst to the competition. Hurst had never driven any race car and was racing for family friend Paul Walkinshaw; Hurst’s father is a legend in Gippsland Speedway Geoff Hurst. 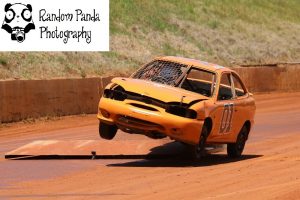 Evans moved out to a terrific lead and it did look how far Evans, however he suffered mechanical issues on the very last lap on the back straight as his car grinded to a halt and Hurst motored on past him and over the last jump to win the final from Leigh Mitchell and Ramsdale.

Drouin Speedway thanks all the spectators and competitors for their support and cannot wait until the next event in the middle of January, a twilight feature night show with four big feature events.