What a day Drouin Speedway had on February the 10th with the Crash and Bash Open and Ladies classes in town for a feature each along with Drouin’s new attraction Ramp Racing Cars and club categories in support. After some spectacular aerial entertainment and rollovers from the Ramp Racers, eyes turned to watching Shane O’Brien and Ally Morrison winning the Crash and Bash finals in a thrilling finish to the day. 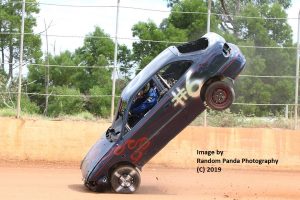 A huge crowd had come to see the Crash and Bash and Ramp Racing and neither classes let the fans down right from the first round of racing where Beau Crompton went flying 10 metres and nose of the car first into the race track before luckily landing on his front wheels and driving away from what could have been a ferocious end over end roll. The Ladies Crash and Bash bumped and grinded their way around the speedway and showed the boys that they better get into each other when it was their turn shortly after. 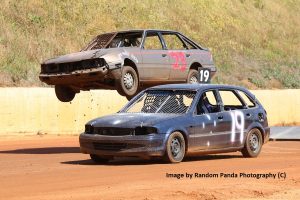 In Ramp Racing Leigh Mitchell defeated the crazy Stuart Banks who must have watched a Dukes of Hazard Marathon the night before race day, as he went flying every opportunity he could. Travis Evans rolled his car over after hitting the pole like gutter then a tyre and that was in the middle of turn one and two, nowhere near the ramps, he was accredited with third place. 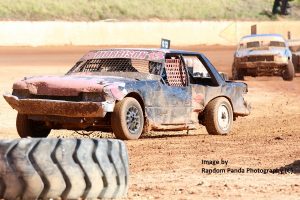 In the Ladies Crash and Bash Ally Morrison who just turned sixteen stepped away from Junior Sedan racing to pursue Crash and Bash and Sports Sedan racing in the adult age group and she began her adult racing career by winning the Ladies Crash and Bash final ahead of a future officially documented legend of the class Leanne Tipple-Young with Sara Benson, Kellie Latham and Belinda McCoubrie rounding out the top five finishers. Morrison did not put a foot wrong in the final steering her XF Falcon around for the win, leading every single lap. 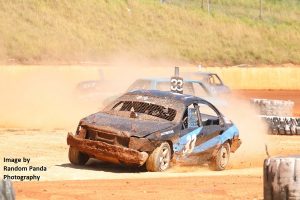 In the Open Crash and Bash, the boys up front had a great battle with Shane O’Brien eventually taking control of the race as he dusted off Nathan Taylor and went on to win after sustaining some pressure for most of the race. Brad Warren was third with Rob Bushell and Andrew Miles in a Ford Territory, believe it or not, rounding out the top five.

Jacob Vuillermin had a win ahead of Marcus Reddecliffe and Victor Benson in the Standard Saloon final after Benson the top qualifier watched Vuillermin take off early in the race. Vuillermin is just hitting his straps with the Victorian title coming up soon in South Gippsland and Reddecliffe in his new car showed that he too would is a threat this year at that event. Benson who is chasing club championship points was a front row qualifier for the third event in a row, his third place securing him another trophy for a cabinet he will have to have extended. Joseph Otimi was fourth and Stephen Douglas in fifth.

Peter Cox had a terrific win in front of fancied opposition in the Unlimited Sedans winning ahead of Warrick Taylor and Darryl Nicholson for the podium positions. Cox absolutely confirmed what Taylor already knew, and that was that he has his hands full to defend his Victorian champion status at this year’s Victorian title.

Trish Dike the current Victorian champion won the Ladies Standard Saloons final with Molly Johnson who like her other half Glassborow, finished on the podium to make sure there would be no jealousy at the dinner table that night. Hayley Hutchins finished in third spot.

The crowd feedback after the event and their support during the event confirms that Family days on Sundays at Drouin is very popular, with lots of racing still to come before 2019 is done.