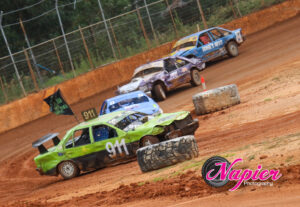 Drouin Speedway ran on Saturday afternoon for the first time in  a very long time with three major feature events headlining the show for Standard Saloons with Jeff Blencowe winning, Sports Sedans with his son Jake Blencowe taking out the victory and the Ladies Crash and Bash where Lea Judd won the latest series round event for the girls.

The Standard Saloons were competing for a win in the ‘Sally Memorial’ to honour the late Sally Walkinshaw whose husband is involved at Drouin Speedway Club as a committee member. Some of the best drivers from around Gippsland competed with Blencowe from nearby Bunyip taking out victory ahead of Longwarry’s Brad Warren, another from Bunyip Travis Evans in the twenty-five-lap feature event. 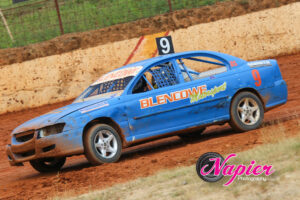 Jeff Blencowe qualified in pole position after three heat races per competitor with Justin Hutchins, Mick Coomer, Mitch Blencowe, Travis Evans and Daniel Walkinshaw the son of Sally rounding out the top six. The first six of nine qualifying races were won by different competitors showing how strong the field was. Evans, Jeff and Mitch Blencowe, then Tegan Bullard, Hutchins and Leigh Gooding won races in the first two rounds before Jeff Blencowe doubled up, Daniel Walkinshaw took a win and Hutchins also doubled up in wins.

Early in the feature event Walkinshaw slotted into second place. From tenth, Brad Warren was fifth by lap two making a mockery of the supposed difficulty to pass notion some have. Warren was second with just under half race distance left to complete whilst Evans and had moved to third and with eight laps to go passed Warren into second before Warren took that place back. Blencowe continued to lead with the chequered flag dropping on a victory for Blencowe ahead of Warren, Evans, Walkinshaw and Hutchins to complete the top five. 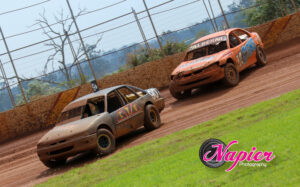 Sports Sedans were competing for the Gippy Blitz and like the Standard Saloons, a Blencowe topped the qualifying with Jake on top of Lee Beach, Lucas Conder, Wayne Alberni, Daniel Kettels and Robert Garlick. Blencowe won all three of his qualifiers and Beach won two of his.

For twenty laps Blencowe had his Commodore ahead of the Commodore of Beach whilst behind them Conder from the Ballarat area maintained a grip on a podium spot. Blencowe secured the double for his family matching his father’s win greeting the finish just .258 of a second ahead of Beach, Conder, Robert Garlick and Justin McKeegan. 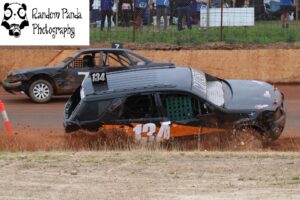 A first lap skirmish in the  Gooses Auto’s supported ‘Hell on Heels’ finished with front of the field starters Kirsten McKendry, Tipple-Young and Maleah Brown all finding themselves well down in the field in eighth to tenth as Bianca Brown moved into second with Sarah Price, Roycroft and Jessica McKendry all chasing Judd. A huge comeback in the fifteen lap final from Kirsten McKendry and Maleah Brown seen them carve up the field to move back into the top five, however Judd led all fifteen and time ran out for the chasing competitors as Judd took the win from Bianca Brown by a quarter of a lap with Kristen McKendry reaching third on her recovery, Maleah Brown in fourth and Roycroft in fifth place.

Drouin Speedway next returns to action with the Unlimited Sedan’s Victorian title on February the 9th and Mini Sprints Might Mouse Classic honouring Colin Lindell a former competitor.