The Open Crash and Bash field attended the blue ribbon ‘Truck Doctor 69 lapper’ at Nagambie Speedway recently and after years of trying, Steve Mitchell took out a popular victory amongst the Crash and Bash Association family being the only driver to complete 69 laps. 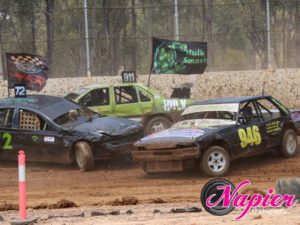 Day two qualifiers started with Judd winning Jason McKendry again, Taylor, William George, Kevin Hughes, Hebblethwaite, leading all the way in the fastest race of the weekend. It took just 4 minutes and 40.491 seconds to complete the race with Craig McKendry setting a one lap fast time of 34.143 as he tried to chase down the eventual winner. Taylor then won his last heat and Judd in the closest race of the weekend winning by just .0991 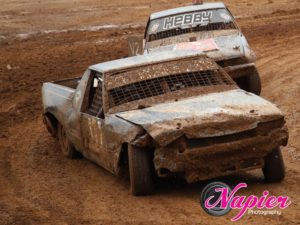 When the starter dropped the green, the battle began. Crash and Bash racing typically involves spins, crunches, panel damage and clay flicking everywhere and that was the case once again. Taylor led the first lap around from Hebblethwaite, Jason McKendry, Craig McKendry and Sgroi. Kane and Mason were the first two drivers to return and by lap seven Jason McKendry had the lead.

Richter left the race on Lap eight and then in a terrific move Jorgen moved from sixth to first on lap ten as he got passed the likes of both McKendry’s Taylor and Judd. Ravet left the race on lap eleven and Craig McKendry got caught out at the front of the field and soon found himself back down in twentieth spot.

Taylor then also got caught out at the front of the field and like Craig McKendry he dropped back, this time he dropped to twelfth and Jorgen lead Jason McKendry, Judd, Hebblethwaite and Alan George.

On lap thirty-two, two of the best performed drivers of the qualifying races exited, Jason McKendry and Sgroi sat out the rest of the race as Jorgen led Alan George, Mitchell, Lewandowski and Bushell. Jorgen and George then swapped the lead on lap 33 and 34 before Hebblethwaite found his way back into the top five as his teammate Lewandowski left the race. 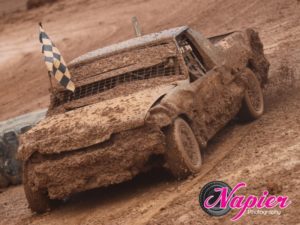 On lap fifty-six, Taylor’s race ended also, and Leeson moved into third with Craig McKendry back into the top five. With a one lap lead over Hebblethwaite on lap sixty-nine the chequered unfurled in front of Mitchell who took the big win from Hebblethwaite, Leeson, Craig McKendry and Williams.

After the race Mitchell spoke. “I have been racing a long time and come close a few times but never quite got there. Today is the day, it is a great day. Thank you to everybody who supports me during the season, and this whole weekend a had a lot of help from competitors to people I have never met. The feelings are amazing, I said I would retire if I won a feature event, sorry I everybody I told a fib, I love this too much.”