Alexandra Speedway’s all classes short circuit night dished up plenty of surprises, records and a couple of rollovers as race drivers entertained a great crowd this past Saturday night (May 12), the biggest shock and surprise to many was William Leeson picking up the win in the Victorian Crash and Bash title whilst Unlimited Sedan driver Warrick Taylor scorched around the short circuit in the fastest ever recorded time. 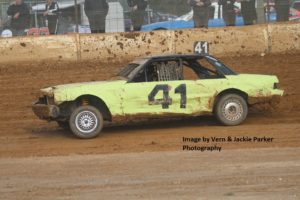 The crowd had come to see Crash and Bash action competing in the Butchers Shop Hotel Bunyip Victorian Crash and Bash title, they were hoping for damage and rollovers, thrills and spills, they got a couple of rollovers, they were treated to a smart under the radar drive by the winner and a few laughs along the way as the drivers tried to hustle their way to a win.

Nine qualifying races went the way of Jake Young the defending champion, Daniel Kettles, James Kane, Young a second time, Matthew Haby, Jason McKendry in back to back victories, Young again to make a clean sweep of all his three heats and Brad Warren.

Lennie Bonnici ended up being tipped over in heat seven when he was tagged and then skewed towards the pole line before lifting up over and over before walking away un-injured.

The fifty lap Victorian title final began hard with Mark Hebblethwaite and Adrian Brown two of the top qualifiers being put out of the race on turn one lap one!

The big valiant of Shannon Mair didn’t last long either. Early in the race Jason McKendry commanded the lead before Young clawed his way back to the front of the field. A flurry of pit stops during the race and hits and flat tyres shuffled everybody around, however travelling under the radar was William Leeson.

The invisible paint he brought at Bunning’s during the week was working a treat as he just kept on getting around the field with a minimum of fuss and took the lead when Young had lost a chunk of laps and McKendry had pitted and dropped back a couple of laps also. Anthony Segond and his panel van ended up upside down on lap thirty five, the victim of a bounty placed upon him which secured Grant Attewell two slabs.

Rob Bushell and Stephen Mitchell were right up the front with spots traded before McKendry moved past Mitchell and into fourth. After a late race caution Bushell sat on the track just a few car lengths behind Leeson with two lapped cars in between the two, Bushell just could not react quick enough as Leeson gapped him and cruised around the circuit for the final two laps to take the win from Bushell, McKendry, Mitchell and Rob Disher. 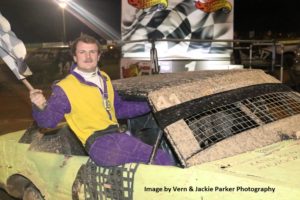 It was a terrific victory to Leeson, and the young driver was humble and thankful in celebration. “Thank you to my family, all of them however especially dad. This is just an amazing feeling, I still can’t work out how, it might sink tomorrow. Thank you to Alexandra and the other drivers and the Crash and Bash Association for another great night of fun.”

For the Unlimited’s Cranbourne racer Warrick Taylor wanted to prove that last year’s track record was no fluke, there was no error and that his car is as fast as he says, he did that easily by smashing the record for the fastest ever car around the short circuit by over a second setting a new one record in heat two of 30.157. 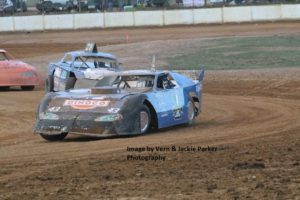 Taylor won all three of the Unlimited heats before winning the final ahead of Peter Cox and Wayne Eames.

Sports Sedan action was once again fantastic with last meetings winner Steve Kershaw starting where he left off with a win and a new six-lap record that would not last very long. Andrew Jordan won the second heat then Alexandra resident Luke Fallon set a new six lap and one lap Sports Sedan short circuit record in the third qualifier, the new six lap record of 3 minutes 21.505 and the new one lap record of 32.285.

Jordan then won the fourth qualifier, Brendan Miller the fifth and Lenny Bates the sixth. Fallon then put everybody on notice that he was ready for the 100-lap derby on Queens birthday weekend and a possible fifth overall victory if cards fell his way. Fallon defeated Tim McPherson, Steve Kershaw, Gareth Wilson and Jordan in the Sports Sedan final.

Nick Cherry’s run of bad luck continued when he won the first heat in the Victorian Speedway Council Junior class before getting in a tangle in heat two and sustaining un-repairable damage. Ricky Cornwall jumped into Andrew Jordan’s Sports Sedan and in heat two of the Juniors broke the six lap short circuit record smashing the field also by over twenty seconds.

Cornwall also set a new one lap record for the class of 33.163 which was fast enough to have put him fourth fastest for the night in the senior Sports Sedan class if he had of been competing. Cornwall then won the last heat also and then the final ahead of Lewis Williams, Rhys Meakins, Harry Orme and Connor Donegan.

Three different heat winners from the three heats was a great reflection of how tight the qualifying racing was in Standard Saloons with Aaron Meakins, Jeff Blencowe and Warrick Howie sharing the wins before the field lined up for a ten lap final.

Howie then showed the field how good the Victorian champion is when he drove his back-up car to a new ten lap record of 6 minutes 35.929 seconds in a eight second victory ahead of Blencowe with a great scrape between Brendon Eames and Aaron Meakins finishing with Eames across the line in third only to be stripped due to an indiscretion earlier that left officials penalising him two places.

Kasey Garlick continued her blistering form in the Speedway Sedans Australia Junior class with a new six lap and one lap track record in the very first qualifier of the evening in victory over Ricky Cornwall. The six lap time was 3 minutes 36.733 seconds and the new one lap time of 35.588.

Courtney Meakins won heat two before Garlick claimed wins in heat three and four. Cornwall elected to not compete in the feature race instead trying to conserve the car for a couple of upcoming races including the Australian title in Northern Territory in June.

After a couple of caution light periods slowed down the race and all eyes looked to the stewards to see if any penalties were going to come, Garlick went on to win from Courtney Meakins, Timothy Gorski, Ally Morrison and Rhys Meakins who was the first B graded driver to finish. Second and third in the B grade were Linken Patterson and Chloe Sheerman.