Pakenham brothers Damien and Brendan Miller have teamed together to win this seasons ‘Bendigo Bank East Ringwood’ 3 Hour Enduro at Alexandra Speedway completing a record 282 laps in the time period, some 23 laps more than the previous record and in the other big event Rob Bushell won the big dollar Crash and Bash Smackdown in front of a healthy crowd keen for motorsport with eight weeks left before the next season starts.

Just under forty teams competed in the Enduro with fancied teams Warrick Taylor and teammate Peter Cox and Leigh Bourke along with David Donegan completing the front row after qualifying.

Early race leaders included Peter Cox, Lenny Bates and then Damien Miller as the field settled down. Spins, flat tyres and mechanical glitches forced teams out of the circuit and back on with their teammates consistently as two-car teams tried to keep circulating as fast as they could whilst teammates fixed or prepared their cars for their next stints. 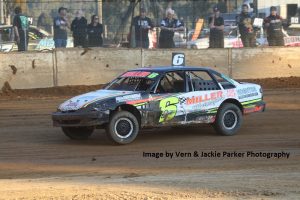 Eventually, the Miller boys seized total control and put laps between themselves and their competitors who pitted more often, for longer or on green lap situations whilst the Millers boys kept taking advantage at the right times of caution lap interventions.

The brothers clicked past the previously event total laps completed record on their way to a new 282 laps completed record. Plenty of supporters from their South East and lower Gippsland area followed them through the night and celebrations continued on the next day as team Miller won ahead of Lenny Bates and Andrew Jordan from Melbourne’s Eastern Suburbs finished just 2 laps behind then in third was Daniel Unternahrer and Josh Service from down Lilydale and Yarra Glen way, fourth-placed team Taylor and Cox. Finishing in fifth was Leigh Bourke and David Donegan a Healesville racer.

After the event, Damien Miller who now has won the event twice shared that he was thrilled to win again, this time with brother Brendan. “It feels great to win again and top off a good year for us both with a Victorian championship to myself and Brendan winning the Bob Hickson Memorial recently. Everything just fell in place for us and our cars held up strong. The track was awesome and we thank all the volunteers and our crew and family who make this all possible.”

The Crash and Bash Smackdown drivers qualified over three races each for their 69 lap feature event with Woori Yallock racer Matt Nelson qualifying in pole position on his home track where he is a member of Alexandra Speedway Club. Stephen Mitchell put in another stellar qualifying run at the track that held this season’s Victorian title, Brendan Miller who was also one half of the Enduro winning combination qualified on the second row with Rob Disher whilst Tim Cole and Nathan Taylor completed the first three rows.

With contact a legal feature of the Crash and Bash racing you could say that for the front runners the racing is sort of like tag and hide as they spin cars in front of them and try and make a quick get a-way and not let themselves get caught by that competitor through the race.

Right from the start of the race contact occurred with pole position Nelson one of the early causalities of the racing lasting only twelve laps, Rob Disher just one lap more, Matthew Haby fifteen laps and Russell Hill and Daniel Kettels just seventeen laps.

Another Pakenham racer, Justin Alberni was rolled over in the dogleg section of the track and he exited the track and was re-scrutineered before returning to compete in more laps before his car eventually broke down for good.

At the front of the field Mitchell, Dale Morrison and Miller put on a terrific show for a long time before at various stages their races come undone. 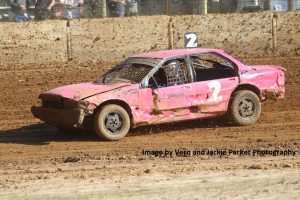 Rob Bushell took control in the last quarter of the race and James Kane who ran a strong and consistent race lap after lap found himself in the right spot when Miller lost laps in the pits. Bushell went on to win from Kane, Miller, Taylor and Daniel Jorgen.