The Victorian Crash and Bash Association state title recently took place at Alexandra Speedway in Victoria’s Murrindindi shire and the forty competitors on hand didn’t disappoint in a tremendous night of action with William Leeson flying under the radar on his way to a title race victory over more fancied competition, Leeson was never challenged with a big hit or spin and he took advantage of that to stay out of trouble for fifty laps and score the win. 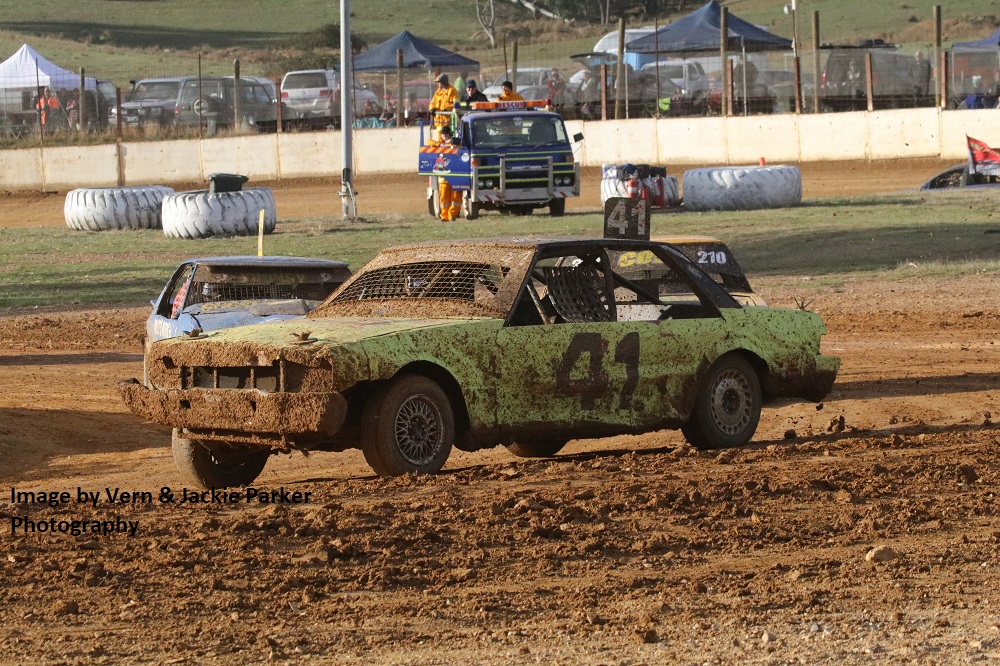 Nine heat races determined where people would start the ‘Butcher Shop Hotel Bunyip Victorian title final and if some would even make it or not with the risk of damage always high.

Reigning champion Jake Young won the first heat race by almost ten seconds eventful race for Darren Skilton who nailed the wall hard, Daniel Kettles the next by a similar margin after making a last lap pass for the win and the Sheriff James Kane took victory in the last of the first round.

Jason McKendry won the first race of the final round then Young won by a massive sixteen seconds in his third victory of the night with big Shannon Mair another victim of the lost wheel club before Brad Warren and Grant Attewell had a great little stoush in the final heat before Warren settled down in front and took the win.

Lennie Bonnici took a hit and a rollover in the first heat of this round and even got a chance to get close up and personal with one of the fire crew, not Lennie’s choice but never mind because Timmy Miller took care of things with a couple of well constructed sentences that in short meant ‘if you ever do that again…………. you can all finish the sentence!

The officials dropped the green flag to start the ‘Butchers Shop Hotel Bunyip’ Victorian title and from the front row McKendry got into Young quickly and moved to the lead as Young dropped behind Haby into third spot whilst back in the pack a first turn stack involved a number of the runners with some heading to the pits not to return to the race or to return too many laps down on the leaders.

Five laps into fifty and McKendry lead Young and Bonnici who had come from deep in the pack with Rob Disher and Dinky Parker in tow in fourth and fifth.  Young briefly hit the lead before McKendry wrested that back and led past lap fifteen. Bonnici’s race ended around lap seventeen.

Young and McKendry swapped the lead again around lap twenty with McKendry winning out as Young left the track, through to lap twenty five McKendry led Disher, Haby, William Leeson and Nathan Taylor.

Things then changed dramatically from lap thirty five just as McKendry looked like he was on his way to a title victory, he went to the infield and William Leeson took over the lead from Mitchell with Bushell in third place. Mitchell pitted soon after and quickly returned to the track however was down the field.

A stoppage with a couple of laps to go bunched up the field Bushell found himself two lapped cars back from the leader. Try as he might Bushell could not move a podium step higher than last season’s Victorian title result as Leeson went on to secure a fantastic win from Bushell, McKendry, Stephen Mitchell, Disher, Daniel Williams, Dinky Parker, Zac Leeson, James Kane and Haby. 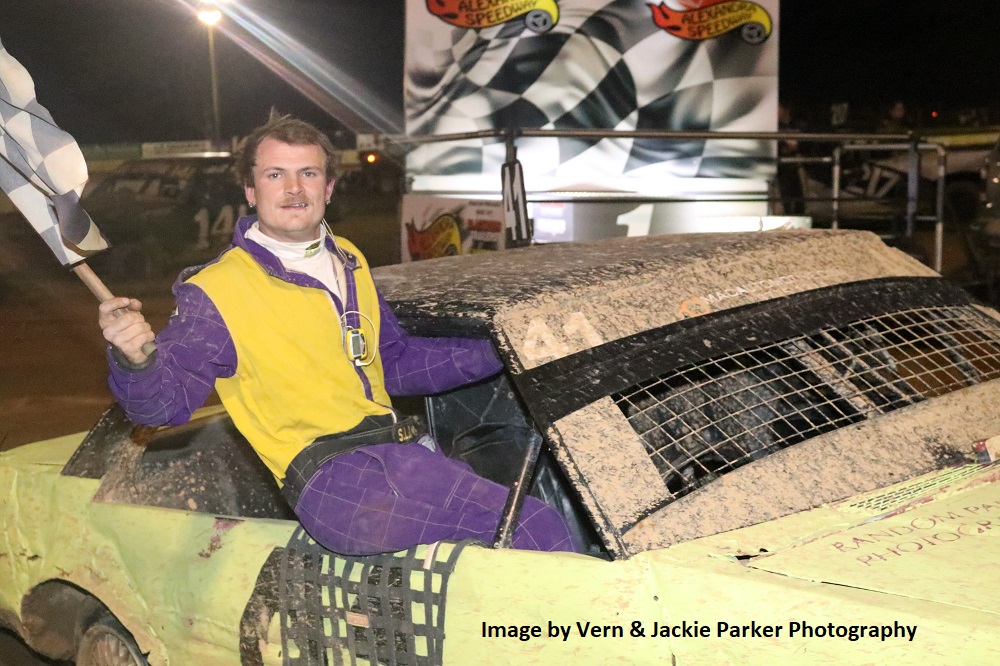 After the race Leeson was humble and thankful in victory “I wish to thank all the family, friends and crew for their support, especially dad whom without none of this would be possible. It is an amazing feeling to win, I don’t know what to say really, well done to everybody else and thank you for all the congratulations.” Shared Leeson.

Other drivers had eventful races such as Brad Warren sharing “At the start of the final I spun entering the dog leg and threw the car into reverse pretty much into the left hander entering the straight and got hit head on that caused no end of drama’s and put me out of contention.”

Anthony Segond was the only rollover in the feature race and the culprit that whacked him turned out to be Grant Attewell in order to cash in and collect on two slabs as his bounty reward for rolling over Segond in his Panel Van, at one stage Segond was in the top ten of the race, a great effort.

Craig McKendry and Adrian Brown had transponder issues however they both enjoyed their nights and there would have been pandemonium if they had of figured in the results and been left out.

Browny in particular could push over the lap scorers box if he was angry, wonder if he would have let me out before doing so?

Mitchell had a terrific night and was running up the pointy end before he started to run out of fuel and had to dash to the pits and came back out according to the transponder a lap down, Mitch doesn’t agree, not unusual nobody ever does.

Hebblethwaite one of the top qualifiers got hammered in the first turn lap one incident and ended up with a broken tail shaft, Hebblethwaite suggested it felt like he got cleaned up and whacked by everybody in that incident.

Murray Lewis spoke of flying in the final, which he did literally when he hit a wheel that had come off a car ahead of him and he launched his car skyward luckily landing on all four wheels and continuing on.

James Kane was the victim of mistakenly being defect flagged. It depends on whose side your on as to the real story, Kane left the track although the officials say the flag was shown to somebody else, Kane says he was shown the flag, the Sheriff is now forming a special committee to investigate and recommend a system of how to eliminate cars with defects off the track, Parker offered to hit them tractors.