Alexandra Speedway’s two day traditional Blackburn Trailers 100 Lap Derby has been fun and won with a ripper contest involving the protagonists from the last two seasons events at it again with Lennie Bonnici the defending back to back champion and Brad Warren twice runner up in those two seasons going hammer and tong from start to finish before Bonnici three peated quite comfortably.

Other feature winners on the weekend included Mark Miles in the Campton Cup feature for Standard Saloons winning his fourth Queens Birthday weekend feature in four seasons and his fifth in six years and in Junior Sedans in his last ever Victorian Junior Sedan feature event, Jack Ramsdale came out the winner of his first and only Victorian Short Circuit Championship.

In the Blackburn Trailers 100 lap Derby feature event, at one stage Bonnici was twenty seconds ahead of anybody else and that distance was maintained for a large chunk of around fifty laps before late race cautions bunched the field together for a final sprint.

The 100 laps took just 62 minutes to complete with the lead car taking roughly thirty two seconds to complete each of his laps at race speed whilst caution period laps contributed to the overall race time.

Bonnici was challenged for a long time by Darren Forrest as the two put distance between themselves and the pack. They had clean air and were at it lap after lap until Forrest car may have overheated and he retreated to the pits.

Warrick Taylor who had by his lofty standards had a horror result as far as qualifying was concerned put some very decent laps together and started to chase down the leader Bonnici before he succumbed to mechanical issues and also parked his machine in the pit enclosure.

Warren, Steve Kershaw and David Donegan were in a tight tussle for the podium positions with all three cracking around the circuit in 32 second laps whilst Bonnici out front was still putting in 31.5 laps each and every lap. 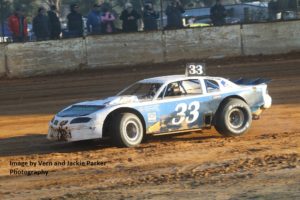 When the chequer flag was finally unfurled, Bonnici was the winner from Warren, Kershaw, Donegan, Unternahrer, Barrie, O’Brien, Service, Campton and Furmston with the top nine no further than two laps back in the end.

Bonnici was delighted with the result of course. “Three in a row, just wow. What a race. I knew early I was in a dog fight with Forrest and from there I could not be too sure where anybody else was; I think Taylor chased me for a while. The car is just so reliable, It runs so smoothly and the engines just keep going. Thank you to all my crew and family, well done to the other competitors and thank you to Alexandra Speedway Club who keep giving us great tracks to race on.”

Twenty one qualifiers were run on night one with another seven on night two before a last chance main event gave the opportunity to four drivers to join thirty six direct qualifiers in the one hundred lap short circuit Feature event.

Day one qualifying race winners included Damien Miller, Darren Forrest, Warrick Taylor, Darren Nelson, Lenny Bates, Lennie Bonnici the defending back to back champion and Tony Moule. In the second round Jake Drewett, Lee Beach, Steve Kershaw, Frank Ramsdale, David Donegan, Bonnici the only driver to have two from two at this point in the way of race wins and Colin Lincoln were winners.

Into the third round and Bonnici completed the night one treble winning his last heat for the night with other final round wins going to Darren Forrest, Clint Furmston, Tim McPherson, Peter Cox, Darren Nelson and Colin Lincoln. 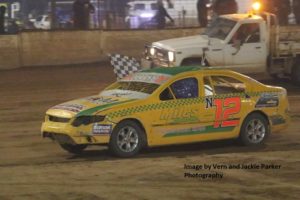 The Campton Cup Standard Saloon Feature event attracted a competitive field of entrants with a number of drivers trying to take the feature win and consolidate themselves in a top five position of the state point score, these included Tim Hutchinson, Nick Christie, Shane Stewart, Mark Miles and Adrian Lawrence.

Stewart, Adam Barkby and Miles won the final three qualifiers on night two before the twelve lap feature event finished the weekends racing. Thick fog had rolled in and the officials were trying to keep the cars circulating enough to have engine warmth lift the fog.

Miles secured the lead and back behind him Reddecliffe, Lawrence, Stewart and Colin Ward sorted themselves out with regards to their minor positions. At a restart during the race officials deemed that Lawrence passed the competitor in front of him who just happened to be his team mate Shane Stewart and when the chequered flag dropped Lawrence was put back two places from his across the line result.

Nick Chrystie was chasing the overall state points win for the season for Standard Saloons and whilst he finished in front of his rival in this race, he had not done enough to secure the state points result in a fantastic season that netted him the Victorian championship race win at Wahgunyah.

Miles set a new one lap short circuit record during the final of 35.093 almost entering the 34 second zone that no Standard Saloon is yet to do.  Miles won from Reddecliffe, Stewart, Ward and Lawrence.

In the Victorian Short Circuit Championship Jack Ramsdale and Kasey Garlick were the top competitors with both taking wins in round one before Jade Moule and Garlick won round two races with Ramsdale finishing second to Garlick and then in the final round Ramsdale and Garlick again were winners. On the second night Garlick and Ramsdale once again won the qualifiers with Garlick taking a clean sweep across the weekend.

Garlick and Ramsdale as expected were to drivers to beat and they took off from the start into their own battle whilst behind them Jade Moule, Courtney Meakins and Tim Gorski had their own tussle for position. The fast cars lapped the backmarkers twice in the twelve lap final and Ramsdale once he secured the lead took off and left Garlick behind.

Ramsdale set a new one lap record also for Junior Sedans through the short circuit of 35.462 on his way to defeating Garlick by almost six seconds. Gorski secured third place then came Moule and Meakins to round out the top five.

Racing returns to Alexandra in August for the annual three hour Enduro for teams racing along with a huge Crash and Bash Association feature event.