The Victorian Compact Speedcar Club made its latest appearance at Wangaratta City Speedway on Saturday the 29th of February with the prestigious Legends Trophy up for grabs. After a terrific night of close racing, the event was won by Ashley Booker running away with the win ahead of siblings Tania Hallett and Justin Paull. 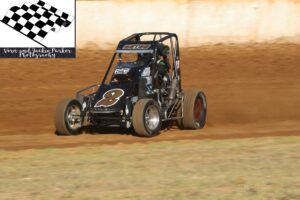 With drivers from Melbourne, Swan Hill and Hopetoun Park making the trek to a venue the Compact Speedcars have a long history with, three heat races were held before the fifteen-lap final concluded the evening with Booker, Hallett, Paull then Aaron Stubbs and Clive Patullock rounding out the top five finishers.

With Rodriguez and the other A Grade competitors having their spots reversed in the second heat, Booker from starting position three took the win ahead of Rodriguez, Hallett, Hutchinson, Paull, Stubbs, Patullock from Mystic Park and Clarke. Paull had the lead early however his car started to splutter and after the race Paull discovered his crew had not filled the fuel tank. Paull also confirmed that he was his crew and the lack of fuel was his own fault. 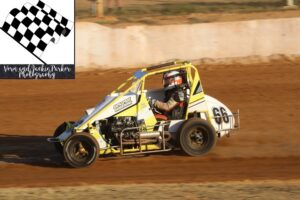 A third heat race where the field was reversed with top point scorer at the back and lowest at the front came to a halt with Clarke (# 35 Kawasaki – R & K Alignment & Exhaust) unable to complete the first lap as the caution lights came on. Clarke’s car was stuck in gear and in the pit enclosure after the race her partner Rodriguez was able to get the car sorted.

Meanwhile Rodriguez had his own concerns in the third heat when he popped another radiator inlet hose due to the pressure build up. Paull made amends for the fuel mishap in heat two when he won the third heat ahead of Booker, Hallett, Hutchinson, Leitchville racer Stubbs and Patullock (# 41 Suzuki – Kangaroo Lake Caravan Park).

With top points to the front of the field for the final Booker was the top qualifier in front of Paull, Rodriguez, Hallett, Hutchinson, Stubbs (# 46 Yamaha – Cohuna Car Spa), Patullock and Clarke for the Legends Trophy feature event. 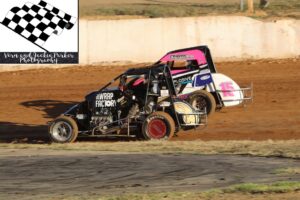 In the Legends Trophy there was some early race drama for potential winners with Rodriguez having shock absorber issues and pulling infield and the youngest driver In the line-up Paull (# 66 Yamaha – Ripper Sticker) being sent to the rear of the field due to contact to the rear of Booker’s race machine sending him spinning in front of the stewards. Paull was placed rear of the field and Booker back into his lead position in front of Hallett (# 15 Honda – Ringwood Mazda) from Woori Yallock, Hutchinson, Stubbs, Patullock, Clarke and Paull.

Clarke had a dramatic crash when the steering wheel came off in her hands in turn four and Ann slammed the concrete and absorbed extensive damage to her car and a visit from the infield paramedic gave her the all clear. Hutchinson (# 6 Yamaha – Associated Powder Coating) pulled infield with electrical issues and Paull moved into third behind Hallett. 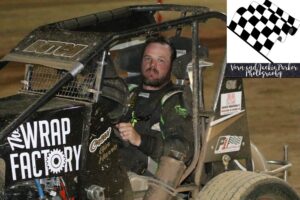 Hopetoun Park based racer Booker (# 2 Suzuki – Bearing Transmission Supplies) won by some distance ahead of Hallett, Paull, Stubbs and Patullock at the chequered flag. After the race Booker had this to say “Thank you to the Victorian Compact Speedcar Club, Wangaratta Speedway for organising the event and Butch for letting me steer their race car to the win. I’m glad Ann is ok after her crash and I have to say I enjoyed my night here in the Compact.”

Car 66 driver by Justin Paull and owned by Mark and Lynne Hutchinson won the Best Presented award supported by Petronas.