Wahgunyah Speedway returned to action on Saturday the 19th with the powerful Super Sedan division visiting and competing in a twenty lap feature event co-headlining the night with the Ladies Open Sedans and their Queen of the Murray and the Standard Saloons and the Lachlan Howie Memorial event.

Super Sedan action supported by Rapid Hydraulics started with two very close heat races with Anthony Randall winning the first by just over half a second and Wayne Aylett from Leeton in New South Wales winning the second by just under half a second before Brad Wicks had a win in the third and final qualifier. 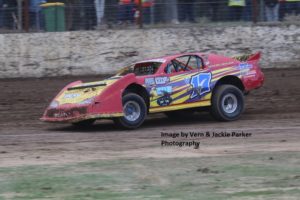 Twenty laps greeted the drivers for the feature event and Wicks continued his season long tussle with Mick Nicola Jnr leading every lap over Junior, the two crossed the finish line first and second with a 2.4 second margin to Wicks, Aylett capped off a strong night with third ahead of Randall, Aylett snatched third with a lap to go then in fifth was Ben Faulkhead.

Queen of the Murray Action for the Ladies Open Sedans produced some tremendous heat race action with all three qualifiers dishing up close results, less than half a second separating first to second in each one.

Kayla Mannix defeated Chelsea Cornelius in the first by .467, then Ash Bunt won the second by .423 over Alyce Iaria. If those results were not close enough Jaimi Barber then won the third .288 ahead of Gemma Laidlaw, who until then had not finished a heat and desperately needed to finish before the final. 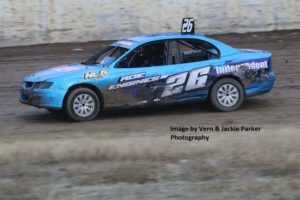 Fifteen laps greeted the girls for their annual feature event and Laidlaw was finally over the mechanical issues that had affected her during the first two races and of the night as she pushed from last in the field to a 4 and a half second win over Iaria whom came from the middle of the pack herself, Fleur Heiner who started at the back also, Mannix and Belinda Chalcraft.

The annual Lachlan Howie Memorial race had five of Victoria’s best Standard Saloon competitors in the final and a great field to keep the pressure on the top runners, Warrick Howie, Scott Whittle, Russell Hill, Garry Evans and Nick Chrystie all had heat race wins with Whittle and Hill two apiece, they were the four most likely to do battle at the front of the field. 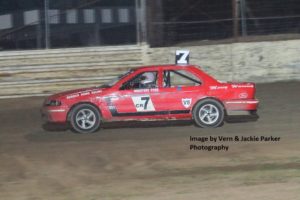 Twenty laps also was the distance for the Standard Saloon feature and the expected top five battled early in the feature event with Whittle out front and leading until lap seventeen of twenty, coming unstuck with contact to with the concrete wall putting him out of business as Howie went on to defeat Hill who recovered after dropping to fourth and passed Chrystie into second, Chrystie finished third, then Gary Evans and Hayden Glare.

In Sport Sedan action Martin Heiner had a win ahead of Craig Cottier with Heiner leading all eight laps to win with Tommy McDonald in third then Corey McDonald and Leighton Evans whilst in the Goulburn Ovens Sedans Liam Powell the current Victorian champion led all fifteen laps and defeated Sam Davey, Nathan Shortis, Peter Little and Ron Watts and the Junior Sedans final went the way of Lachie Fitzpatrick leading on all eight laps and finished ahead of Tristan McGraw, Jake Cottier and Toby Carmichael.