Wahgunyah Speedway held its final nights racing for the season on Saturday the 9th of June with three main feature events to entertain the crowd including the visiting Amca Nationals and the Production Sedan and Goulburn Ovens Sedans 1000 events, wins went the way of Frank Thierry from Mildura, Stephen Laidlaw from Morwell and Nathan Shortis from Mulwala.

In Production Sedan racing for the Wahgunyah 1000 Laidlaw did not have things all his own way, in fact he did not win any of the three qualifying races with the returning Andrew Cunningham picking up two of the three heat race wins and Bruce Robb who like Cunningham has not done much racing in the last two seasons winning the other.

Seven entrants greeted the starter for the final with Laidlaw and Cunningham the front two protagonists. The lead two defeated the rest of the field by a long way, almost lapping all of the other five. 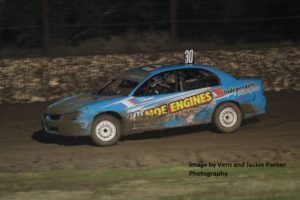 Cunningham led from the start of the race and come lap fifteen as close as the lead two were it the anticipation was gaining momentum for a fairytale return to the track win for Cunningham, however Laidlaw knows every nook and cranny of Wahgunyah Speedway, he knows every trick in the book also and on the last lap of the race the ‘dream killer’ Laidlaw secured the lead and won from Cunningham, Robb, Rodney Anderson and David Walton.

Amca Nationals visited from further South with a few cars from around Melbourne whilst the eventual winner was Thierry. Mostly competing with 350 crate engines the eight cylinder sound is like music to some ears within the dirt track world and three qualifying wins were shared by Neale Peachey and then Frank Thierry over Peachey in two very close finishes at the line where both lead racers were less than half a second apart. 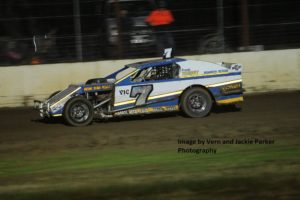 The closeness of the lead two cars continued in a cracking final with Thierry again coming out on top and this time by .256 of a second from Peachey with Tasmanian Rodney Bassett in third and Sharon Tindal fourth across the line.

Goulburn Ovens Sedan Association competitors were competing in the QA Kitchens supported GOSA 1000 and with enough competitors on hand to ensure six heats the qualifying produced some exciting results, Jamie Atkin took out an impressive heat win first up, then Shortis won the next two, Troy Frost won the fourth then Brendan Brewer and Shortis again making it a clean sweep for him in the heat race results.

Fourteen cars made it to the start line for the final and the Powell brothers from Beechworth including the Victorian Champion Liam had a tough field to try and beat to close out a great season for them. A list of talented racers failed to finish the race including Peter Little whose car was a little bent after a crash, Chelsea Cornelius, Danny McCarten, Brewer and James Powell. 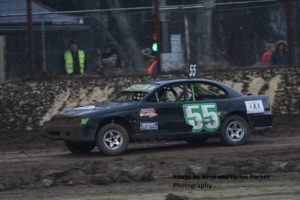 Shortis led all twenty laps and went on to make it four from four when he won the final from Liam Powell, Atkin, Sam Davey and Frost.

Warrick Howie also had a clean sweep night in the Standard Saloons winning all three heat races before winning the final in front of Trev Goldsworthy, Micheal Fleming-Robertson, Team Joosten and Bruce Prichard.

In the Sports Sedans and Ladies the field was mixed together with Tommy McDonald, Corey McDonald and Gemma Laidlaw coming up trumps as the top three in the final then Troy Peterson in fourth. In Junior Sedan racing Rhys Lansdown was too good for Jake Cottier and Ruby Prichard.