Clubs, sporting and community are places where lifetime friendships are formed, the importance of mateship is sometimes underestimated, however, today mateships in a bloke’s life are enjoying mainstream media attention as the benefits of having others in your life cannot be ignored, more and more these days we are looking out for each other.

Tim Cole, Dale Morrison, Tom McKenna and brothers Damien and Brendan have been lifetime mates that do exactly that and continue to be lifetime mates as all five of them do their dirt track thing, and the dirt track is where it all began.

Each of the five have their own successes in life and racing and each celebrates the success of the others and shares and supports the others in the bad and the good life and dirt track times by helping each other out.

The lads have been there to lend an ear and support through divorce, failed romances, childbirths, child raising, new relationships, injuries and accidents and anything else life throws at each of them.

Whilst Morrison is the oldest, the friendship built up around McKenna and his family and then the Miller family, nowadays all four families are very much tight with each other.

It was through McKenna that Cole and Damien Miller found their passion for Speedway and that, of course, helped Brendan to find his passion, whilst Morrison found a different path through respected Speedway family the Ramsdales and in particular ‘Big Al’ Alan Ramsdale who back in the day was a handy B Grade Sedan racer.

Interestingly everybody in the group of five that was introduced to Speedway after McKenna, has a longer and more fulfilled racing pedigree, McKenna though is keen to forge ahead with his and recently had an outstanding showing, his best yet behind the wheel at the Alexandra Enduro.

At the recently held 2018 Alexandra Enduro, all five of the boys raced together on the same night at the same track for the first time ever, around twenty years coming and it was a special moment for the boys and their families.

Back to where the friendship all began, ‘The Big Show ‘or Damo needs very little introduction for Gippsland Speedway fans, Damien Miller is a multiple times state champion. Damien and McKenna went to kindergarten together as three year olds and have maintained a 25-year friendship; McKenna is clearly like a part of the Miller family.

Damo was driving paddock bombs on the family farm and used to go to Speedway with Tom and Tom’s brother Ryan and mother Claire to watch racing all the time from around the age of eleven and that is where Miller’s interest in racing began.

Cole’s initial introduction to the rest of the lads was through his friendship with McKenna whom he met in a Garfield pub run by Tom’s father.

Cole met the Miller family through Crash and Bash parking next to each other one night at Rushworth Speedway forming that friendship there and later with Morrison through the connection with the Millers and McKenna and strengthened his friendship with Morrison being involved with the 3 Litre Sedan class.

Moving onto to Morrison, known as Mr Entertainment, The Mad Midget, Captain Risky and just Dale. McKenna remembers meeting Morrison in 2005, it was hard to miss the larrikin who lived in the highway corner house with the big blue tow truck and 74 cars parked out the front! (Wife Notes: Nothing has freaking changed!)

Morrison began racing as a 17 year old having had a lifelong obsession with cars. Morrison spent a lot of time at the local Pakenham based Ramsdale Wreckers owned at the time by Alan Ramsdale. Ramsdale suggested he come along and see what Speedway was all about, he loved it and brought a car and had his stepfather tow him around to go racing.

‘The Little Show’ Brendan Miller or Brendo is Morrison’s best mate and he was brought into this little brotherhood following in the footsteps of his big brother Damo, big shoes to follow. Brendo is not the only driver in the group to race Junior Sedans, however he is the only driver in the group to race the Speedway Sedan’s Australia version of Junior racing, his passion though was Crash and Bash racing and all five of the group at one time or another have been on the track in Crash and Bash Racing, something that will tie them together forever.

Cole hit the track in Crash and Bash as a twelve year old winning championships at that level, Damo began racing himself in a HQ Crash and Bash Junior he purchased of Justin Jose and raced that for a couple of seasons before moving into a Commodore. Miller raced in both Junior and Senior Crash and Bash and is remembered for running over the Chief Steward Mick Mahoney (Lobo) at Drouin Speedway who is now Dale’s father in law!

In Crash and Bash seniors, Damo won a drivers’ championship and a Victorian title before taking to 3 Litre Sedans at the same time as Morrison before moving into Open Sedan and now Sport Sedan racing.

After Junior racing he moved into senior grade Crash and Bash for a couple of seasons winning the senior’s driver’s championship before converting the car into an Open Sedan car.

Morrison has raced Crash and Bash off and on for 18 seasons, he is one of the most entertaining competitors in the class, yes he can win races however more often he is on track putting on a show for spectators without much regard to actually winning.

McKenna also has had a go at Crash and Bash Juniors before having a go in Crash and Bash Seniors writing off two cars in his only two shows! You could say that he and Morrison are naturals at tearing up (Insert word that rhymes with Ship)!

Damo and Morrison are both state championship winning drivers, most definitely Brendo has that capability, it’s just a matter of time if he hangs around Speedway a little longer.

Damo has won two state titles in Open Sedans which became Unlimited Sedans before the current existing version without mono construct cars came to being and has won two more titles in Sports Sedans along with many feature race wins.

In most of these classes Morrison has raced he has won championships and features, and rolled his cars over onto their roofs even once rolling a massive five times at Alexandra in one rollover before jumping out and raising his arms to the crowd in triumph with his now wife still strapped upside down in the car!

Morrison raced Bumper Cars, 3 Litre Sedans, Modified Sedans, Standard Saloons where he won a Victorian title and finished second and fourth in others, Unlimited Sedans, Crash and Bash and Sports Sedans where in a state title, hilariously whilst obviously not at the time of the incident however definitely now when you look back upon it, Brendan made contact with Dale’s car during a Sports Sedan title at Rosedale rolling Morrison over which wrote the car off and put Morrison in hospital where he was diagnosed with a broken rib.

Continuing on with rollovers, it is a part of the sport and Morrison has had his share of big rollovers in almost any class he has competed in, he is a hard charger and he doesn’t give an inch and if he ends up on his roof then he is fine with that, it’s part of the sport, part of the show, this past season McKenna had a huge rollover in Sports Sedans, he too has become used to rollovers although he hopes he never has one like he did at Redline in 2018 that put him in hospital and out of work for some time.

The sport is dangerous and sometimes things do not go according to plan, for the brotherhood this point is highlighted by what happened to Cole.

Cole spent some time out of the seat when a race track accident almost resulted in a foot amputation and put a halt on his race career for some time. This was one of those times all his mates meant the world to him, their concern, friendship and encouragement seen Cole come from some dark times and on to rehabilitation and eventually back on track as a Crash and Bash racer in his big HQ Holden Sedan.

Cole hasn’t stuck just to Crash and Bash racing, he went on to win a Victorian Speedway Council Open Sedan club championship at Nyora Raceway and he and Brendo share the success of a third-placed finish in the Alexandra Speedway Enduro. Brendo has also finished fifth with Morrison, second twice with his brother and this year winning the Enduro with his brother.

Family wise firstly as we already mentioned this brotherhood had beginnings through the McKenna family and moved to the Miller family with Damien and Brendan’s father and mother Tim and Stella spending many years of their lives towing the boys around to Speedway and towing their cars, this year that tradition continued as Dad towed one of two race cars Brendan had to race to Alexandra for the Enduro where Brendan was competing in Open Sedans and Crash and Bash. The Millers are affectionately known as Popsie and Mumsie to everybody.

Popsie and Mumsie are still heavily involved, Popsie as Chief Steward and club committee member and mumsie leading the support crew and being there for everybody when needed, however, it’s the families of Morrison, Damo and McKenna that are ensuring this bond will continue for many, many years yet.

Morrison with his wife Sharon and the four kids Ally (also a racer), Holly, Katie and Luke, Damo with his fiancé Danni and daughters Kahlan and Brooke and McKenna with his fiancé Tayla and daughter Kaelyn and son Karsyn will all see these families on or around the Speedway for years to come, Ally is already a gun race driver currently competing in the Speedway Sedan Australia Juniors, she is somebody to watch as she gets older.

Going back to where this brotherhood all began, McKenna has not raced as much in his life as the other boys in the group, mostly he was pit chief having been involved with Damien’s racing for 15 years.

Before this though, as mentioned earlier Speedway was a family affair for Tom with his mother and his brothers Ryan and Mal heading off to Nyora on Saturday nights through the 90s to watch.

Mal won a Standard Saloon raffle car and Ryan brought a Mini Sprintcar and Tom became the Crew Chief for both of them. Tom gained a lot of his knowledge through working at Victory Lane Racegear in Pakenham with Mat Eastham after school, this included crewing on Eastham’s Sprintcar along the way.

This past season was Tom’s first in Sports Sedans with his own car after putting one together for last season’s 100 Lap Derby which he rolled over before building up another Sports Sedan before rolling that over at Redline this season in March, before building another car (his third in twelve months) which he raced all the way to a finish in the 3 Hour Enduro teaming with Morrison, he was over the moon. 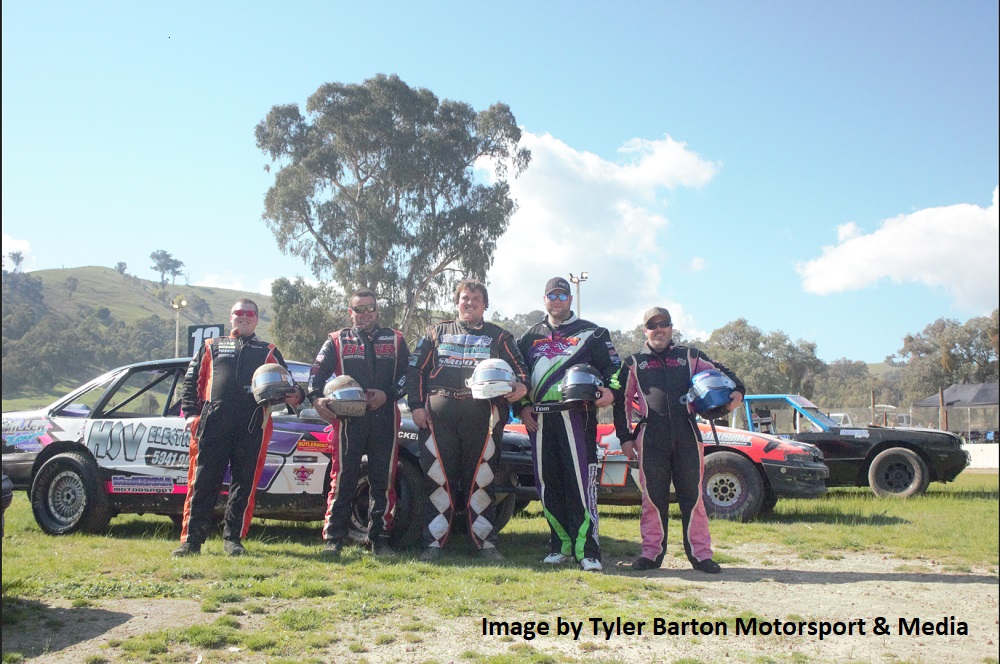 The moment was twenty years in the making, now that it has happened, we await what the brothers come up with next.