Daylesford Speedway ran their latest race meeting this past weekend with the Dave Coad Memorial for Sports Sedans and the Roz Moynihan Encouragement Race for Novice Ladies the feature highlights. Nathan Fawns from Geelong took home the sought after memorial victory whilst Chloe Graham looked like a veteran on track when she won the encouragement race.

Sports Sedan racing began with Fawns winning the first and last qualifying races of three with Leigh Bourke winning the second race. Fawns and Kayla Knox then started at the front of the field in the final starting in slippery conditions. Drivers found it challenging at turns one and two however, Fawns entered turn one consistently better than the rest and Bourke used the other end of the track to try to put the pressure on and make a pass. Fawns led the twelve-lap final from start to finish to defeat his mate Bourke, Knox, Katie Meyer and Jason Weil. 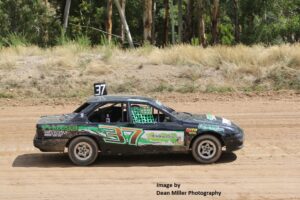 The Ladies in the Roz Moynihan Encouragement Race were given two sessions of track time where the Chief Steward Paul Botheras was very keen to see all novice drivers get all the assistance they needed. An example of this was Botheras leaving his post more than once to try to a driver to understand a manual racecar starting procedure. The same driver later spent the day as passenger with Belinda Taylor an experienced Lady racer as passenger and by all reports, had a great day.

Chloe Graham went on to win the Roz Moynihan Encouragement race ahead of Janaya Butler, Amber Bumstead-Smith and Linda Chase. 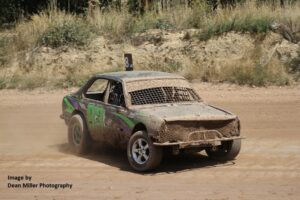 David Barrie driving an Ecotech powered Toyota Corolla won the A Modifieds when he defeated Luke Humphrey and Jackson Basten.

Des Robinson in football terminology came bursting from off the bank flank and through to the pocket in one swift move passing Jayden Humphry and taking the chequered flag in the Street Stocks. Steven Warlond finished third passing Graham Miller towards the end of the race.

Rickylee Basten was too good for Katie Meyer in the Experienced Ladies final. The Basten car had quite a workout running twelve races in the day. The pit crew sure earnt a beer. Jackson Basten, Rickylee, Coby Kakoschke and Janaya Butler all competed in the same car all day. In the Ladies Basten defeated Meyer, Jane Laidler, Richalle Jenner and Marlena Argent.

Coby Kakoschke had a great battle with Blake Harris and just had too much straight line speed on the day as Harris made ground when driving through the turns. 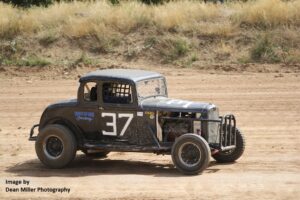 Rounding out the results was the Standard Saloons win to Paul Domburg. Paul had the pleasure of driving his wife’s ‘Pink’ car and probably made no mention of the colour of the car at work on Monday, however we digress, Domburg won both heats and was too strong for Priscilla Grech, Justin Crerar, Bradley Dickson and Ashley Dean.

The Ace of Spades Vintage club demonstrated the good ole fun days of the 50s and 60s with standout displays from the likes Dennis Hocking and Glen Barnett whilst current Australian Street Stock star Mick Dann probably should have stayed in bed. Kids with posters of Mick Dann were seen swarming later for signatures from Des Robinson instead.