The ‘Dwyer’s Toyota’ Victorian Speedway Council Sprintcar title race has been run and won at Bairnsdale Speedway with victory to Latrobe Valley businessman Dennis Jones ahead of his very own teammate Justin Bowen and local Bairnsdale young gun Alistair Bastian in a tough night of racing at the popular Granite Rock venue. 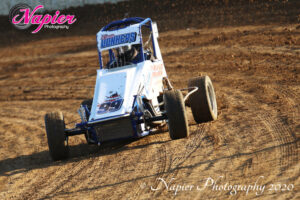 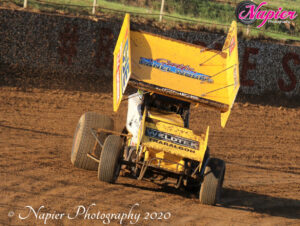 On consistency Jones had qualified in pole position with Steenholdt alongside, then Noonan, Barton, Andrew Nielson and David McKay rounding out the top six starters. With the drop of the green Barton moved into third place and by lap nine and ten, attrition started to hit as cars began to drop out with damage and mechanical issues. Noonan was the first of the big guns to exit on lap ten with Stevens. Steenholdt took the race lead just past the one third race distance mark, however his race was over with twenty laps completed.

Jones and Barton controlled the last fifteen laps of the thirty-five-lap final with Jones winning by over a second from Barton, Bastian, Adam Greenwood another Bairnsdale local and Andrew Nielson also a local business owner.

Dillon Siely won two of the three Limited Sportsman qualifiers with Bowen Donkers the other before the two engaged in a great race in the final with just .132 of a second separating the two at the finish line. Donkers beat Siely from Chris Woetjes from the Goulburn Valley and Tim McKenzie also from the same area and Daniel Hurley in fifth. 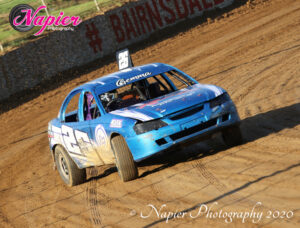 Trish Dike won two of three Ladies Sedan qualifying races with Gemma Laidlaw the other before Laidlaw went on to take a big win in the final by more than fourteen seconds. Laidlaw beat Mel Tatterson, Ash Wilson, Emily Ayre and Kate Stuchbery. 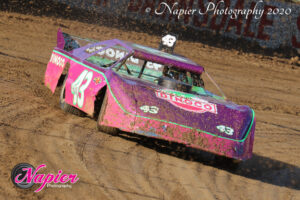 The visiting Unlimited Sedan action provided three qualifying heat races with Warrick Taylor winning two of those and Lennie Bonnici the other before the two went head to head in the final. Heyfield racer Johnny Young had other ideas though as he put in a terrific feature race run to split the recent Victoria one and two championship finishing drivers. On lap twelve Young passed Bonnici and as the last three laps ran out Taylor led the trio to the line with Young, Bonnici both followed by Daryl Nicolson and Anthony McKean. 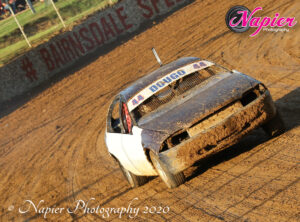 Standard Saloon racing in the Great Southern Kitchens 600 seen some visiting drivers from South Gippsland stir up the locals. Rhys Lansdown from Koo Wee Rup won the first heat, Steven Dadswell from Bairnsdale the second before Stephen Douglas from Poowong won the third. Nyora club members Douglas and Lansdown then took command of the race as the two led the top two spots from the start to the finish of the race. Douglas who recently won in Daylesford won once again this time at Bairnsdale from Lansdown, Dadswell, Steven Danks and Josh Cormack.