Four Marco family members made history on Saturday night in the SDAV Hot Rod Club when Stan Marco Snr and his boys Stanley Jnr, Tommy and Raedyn all competed together at Heartland Raceway in Moama New South Wales as they joined Phil Jenkins, Kali Hovey, Chris Wilkes and Shannon Meakins to compete for the Legends Cup victory.

The Legends Cup honours all the past Legends that have competed or been involved with the SDAV Hot Rod club to help create the history that it has amassed. Winning the race is a big deal and Stan Marco Snr came out on top on Saturday night as he finished ahead of Phil Jenkins and Kali Hovey two other of the longest serving competitors of the class.

All three on the podium have a passion for the club that has contributed to its success and Marco now has instilled that tradition into his sons to carry on with the class name into the immediate future. 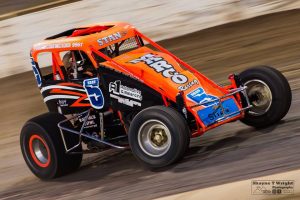 Three heat races were held with Marco Snr dominating the number one spot winning all three.

It all started with heat one and Stanley Jnr and Meakins (#84 Walt’s Wishes) at the front of the field and Wilkes, Hovey, Jenkins, Marco Snr, Tommy Marco and Raedyn Marco completing the field. Lap one was written in the books with Meakins leading Stanley Jnr, Stan Snr, Hovey and Jenkins (#3 P & S Automotives) the top five crossing the line.

Marco Snr passed Jnr on lap three for the second spot and on lap five Tommy’s car came to a stop brining out the caution. He was able to be re-started and joined at the rear of the field as Meakins resumed his lead. On lap six Meakins spun out of the race lead and out of the race with his engine all the sudden causing an issue for him losing its power at speed down the straight.  Marco Snr then lead from there and won ahead of Stanley Jnr (#11 A1 Automotive), Hovey, Wilkes and Tommy Marco.

Tommy Marco (#6 Fabricare Engineering) and Hovey had the front row positions for the second heat race with Marco Snr, Jenkins, Stanley Jnr, Wilkes and Raedyn Marco the line-up. Tommy took up the lead on lap one Hovey in chase followed by Marco Snr, Jenkins and Stanley Jnr. Marco Snr took the lead the very next lap and on lap six Hovey moved to second ahead of Tommy. A spin to Stanley Jnr and Tommy Marco on lap eight put them to the rear of the field and the heat race ran out with Marco Snr winning from Hovey (#22 Pizza Box Geelong), Stanley Jnr who recovered to third, Jenkins, Wilkes and Tommy Marco.

In heat three Wilkes (#13 Procote Power Coating), Jenkins, Marco Snr, Tommy Marco, Stanley Jnr, Hovey and Raedyn Marco was the grid. Marco Snr surged to the front of the field on the first lap with Jenkins, Wilkes, Stanley Jnr and Tommy Marco following him across the line. Things came undone for Raedyn Marco (#2 A+ Powder) on lap two when he hit the concrete and finished with a flat front left tyre amongst his damage. Marco Snr led Jenkins at the re-start and held that through to the end to win. In third behind Jenkins were Stanley Jnr, Wilkes and Hovey.

A coin toss determined that the top qualifier would get to remain in pole position for the feature event over twelve laps and this meant that Marco Snr (#5 Indy Parts), Stanley Jnr, Hovey, Wilkes, Jenkins and Raedyn Marco began the feature in that order.

Marco Snr lead lap one from Stanley Jnr, Jenkins, Hovey and Wilkes with things rolling along in order until a pass on lap six from Jenkins over Stanley Jnr moved him into second. Hovey followed on the next lap and moved herself into third as Stanley shuffled back to fourth before spinning on lap ten and moving to the rear of the field for a re-start. 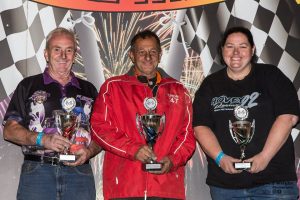 At the end of twelve laps Marco Snr got his hands on the Legends Cup spoils and took away the trophy for the win ahead of Jenkins, Hovey, Wilkes and Stanley Jnr. After the race Marco Snr was delighted to have won the Legends Cup. “It is my honour to win a race that pays tribute to all the clubs great people from years gone right up to now. What a terrific night to have all my boys racing and to take the win in the family. Well done to Phil and Kali who also have a tremendous history with the club, it’s a great podium.”