Saturday night February the 3rd at Rushworth Speedway was a big night with two Victorian Championships on the line and when racing was all finished, Trevor Mills from Corowa the reigning Speedway Sedans Australia Victoria Production Sedan Champion had retained his crowned and Scott Laidlaw from Morwell had retained his Victorian Speedway Council Division 2 Hot Rod Championship.

Two times Australian Champion Stephen Laidlaw set the tone for the SSA Production Sedans when he came out on top over old foe Trevor Mills by just 1.317 seconds in the first heat, Laidlaw had the bit between his teeth after a earlier season crash at Wahgunyah and watching Mills a week prior taking a win on his very own home track at Rosedale in that feature.

Visiting New South Welshman Wes Barnes captured victory in the second heat with Laidlaw picking up another win before Mills won his first heat of the night in the forth, which he did so with a race time of 3 minutes 19.676 seconds, the best time of the night for the class. 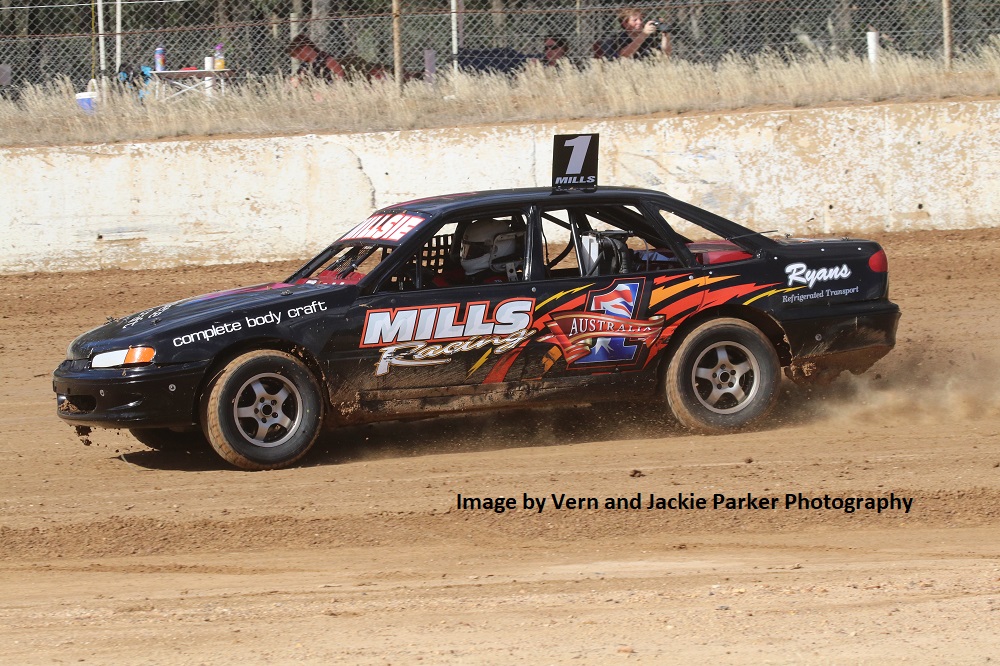 Damien McAlister from Goulburn in New South Wales won the fifth heat by the barest of margins .414 before Mills reversed the first heat result and put one over Laidlaw who incidentally put in the books the fastest one lap time of the night with a 19.524 in finishing second.

Starting the Victorian Championship at the front of the field, Mills and Laidlaw quickly sorted out who was going to follow whom with Mills taking the advantage. Raymond Ussher from the Wangaratta club just up the road had a short race pulling out within the first couple of laps and Craig McAlister and his brother Damien moved up positions.

Making moves from further in the pack was Wayne Bourke from Leeton and by lap fifteen he had moved from around tenth to sixth with more to come. Mills continued to lead out front with Laidlaw and Bourke by lap twenty five was now in fourth. With a few laps to go, Bourke passed Craig McAlister and when the chequered dropped Mills had claimed back to back Victorian titles with Laidlaw, Bourke, Craig McAlister and Damien McAlister the top five.

Laidlaw’s featured again in the Division 2 Hot Rod Victorian title when Stephens nephew Scott started the night with victory in heat one, in the process recording the fastest one lap time of the night for the class of 19.284.

Scott Angus, Laidlaw again with a best race time of 3 minutes 24.304 seconds, Rob Tatterson, Shane Uprichard with a small .403 win over Melissa Tatterson and then Laidlaw the only competitor for the evening to win all three of his qualifying heats were the winners in the other heat races.

Starting the first of thirty laps in the Victorian title Laidlaw lead Scott Angus and Rob Tatterson on lap one with Uprichard jumping out the box quickly moving from sixth to third by lap two. Jordan Haley quickly forged forward from ninth to fifth by lap sixth and Paul Camm and Jake Van Den Brand from even further back started to progress.

Heartbreak for Scott Angus whose race expired just a handful of laps short of picking up a podium at the state title whilst Laidlaw who had not been passed, continued on to win from Uprichard, Haley, Camm and Van Den Brand to end the defence of his Victorian championship.

In local Goulburn Valley Auto Club class action Thomas Conboy picked up a win in the first heat of Open Saloons before favourite Paul Lamb hit back with back to back wins in the next two heat races including setting the fast one lap time of 19.371. With no final Lamb came out on top of the points with Conboy in second, Brad Simmonds, Mark Bergmann and Jay Nicolaisen rounding out the top five.

Leigh Jeffery who already this season has GV Production Sedan race night victories under his belt picked up another after winning two of the three heats. His second win was by just .443 of a second over Bevan Hutchins and in the next heat Hutchins won by just .669 ahead of Scotty Smith. Jeffery set the fastest one lap time of the night of 20.107 and picked up the win ahead of Bevan Hutchins, Scott Smith, Chris Woeltjes and Shane Hutchins.

Flying back from Queensland after competing in racing at Maryborough, Felicity Roycroft brought back a bag of confidence with her as she scored a win in the first heat of the GV Ladies Saloons by .251 of a second over the class top gun Chloe Lamb. Lamb looked ominous though clocking a one lap time of 19.723 as she chased Roycroft and then finished off the evening with victory in the next two heats. With no feature race Chloe Lamb had done the job once again taking the win from Kelly Lamb, Belinda Chalcraft, Roycroft and Chelsea Hodge.

Finally in GV Junior Sedan racing Lachie Fitzpatrick started the night exactly the way he started most nights by winning the first heat ahead of Tristan McGraw. However, McGraw was on song and the crowd sensed tonight might be his night when McGraw picked up the win in heat two by 1.080 ahead of Fitzpatrick who was quickest on track with a 19.401 one lap time.

It all came down to the third race and McGraw moved from the second row and into the lead from the start and Fitzpatrick chased all the way with McGraw again winning by less than two seconds, when the points were tallied McGraw had defeated Fitzpatrick for the nights win with Daniel Smith, Josh Cecil and Luke Cecil rounding out the top five.

Rushworth Speedway returns on February the 24th with the Ray Welsh Memorial for SDAV Hot Rods and a feature for the Junior Sedans supported by the other club classes.