Goulburn Valley motorsport fans headed to Rushworth Speedway for the final time this season with a huge show on offer, bang for your buck entertainment for the family and nobody left disappointed as every race event was completed and a new Australian champion Justin Paull was crowned in Compact Speedcars, the Victorians beat the New South Wales crew in Wingless Sprints and a local winner won the Dave Pollard Memorial.

Five visiting classes made for a massive day of racing that began from 1 pm and went through to 10.30pm, giving plenty to spectators for the small entry fee. Melbourne driver Justin Paull became an Australian champion, local Daniel Wilson won the 3 Litre Sedan Pollard Memorial, James Powell won the Goulburn Ovens Sedan Association feature honouring Col Young who had done so much around the Goulburn Valley Auto Club, Dean Heseltine won the Amca Nationals and Luke Schneider secured a Victorian win in the Wingless.

The Australian title for Compact Speedcars was the headline act on the massive program of nine classes and one driver would earn the right to run with the Australia number one for the next twelve months between national titles with a healthy contingent from New South Wales to battle the Victorians.

Six heat races were contested in order to settle the order for the twenty five lap title race later on in the evening. Alan Pitcher won the first heat as he set about recording the fastest lap of the night of 17.409. Justin Paull won the second heat as another four different heat race winners followed, Gaby Yammouni, Rob Rawlings Snr both from New South Wales, then local Shepparton lad Louis Rodriguez and another NSW driver Jason Essai. 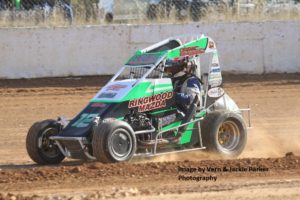 Rob Rawling Senior started at the front and Rodriguez was his early race challenger with Yammouni, in third until lap two with Justin Paull coming from row four into third spot and the crowd murmurs started, this guy might win it. By lap five there was no maybe about it, as Paull moved into the lead with Rawlings Snr, Rodriguez, Hutchinson and Yammouni the top five.

The pace was quick at the front and Paull continued on the lead with Rodriguez still giving hope to his local supporter base in second place. Hutchinson moved ahead of Rawlings Snr as Mark Heaton joined the top five. 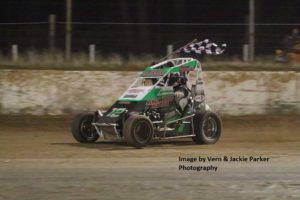 Through lap fifteen to twenty the top five ran down the laps in a hard fought battle it all went wrong on lap 23 though as Hutchinson came unstuck riding out a crash that seen him roll five times and leave the track sore around the ribs and out of the fight and the re-start wasn’t what Rodriguez was looking for as he got passed by Heaton and Rawlings Snr, Paull motored to the win from Heaton, Rawlins Snr, Rodriguez and Pitcher to settle the Australian title top five.

The Col Young Memorial a joint two meeting event between the Wahgunyah race track and Rushworth was holding the final round for the Goulburn Ovens Sedans Association. The class used to be strong at Rushworth and over the years the competition moved further north east to Wahgunyah, Wangaratta and up in to the Riverina at Leeton.

Wayne O’Keefe who has a strong recent history at Rushworth having been a Production Sedan champion was pleased to win the first heat of the night before brothers James and Liam Powell won the next two and Mitch Watts the final heat.

The Powell brothers James and Liam started from the front of the field with Liam Powell trying to win the Col Young Memorial outright after winning the first round at Wahgunyah and all drivers also trying to move themselves into stronger positions in the Goulburn Murray state point score. In the twenty lap final James Powell led Liam, Danny McCarten and Watts for the first half of the race, further back Brendan Brewer and Peter Little were battling to get into the top five. 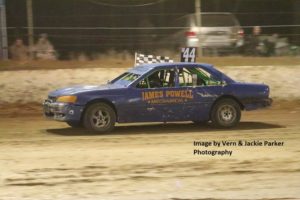 The race was fast and uneventful for all but the last couple of laps when McCarten who had third place sown up dropped out of contention as James Powell picked up the win from Liam Powell, Watts, Little and Brewer. 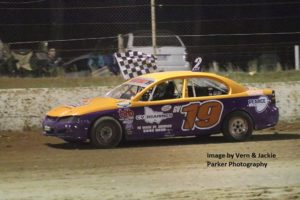 Swan Hill racer Michael Boyle, who won the other heat, started stronger leading until lap four before Wilson took over. Nagambie member Shane Simpson ran in third right the way through and Steve Honeyman from the fourth row moved into the top five by half way. When the chequered flag unfurled, Wilson had taken the big win from Boyle, Simpson, Jason Ahearn and Honeyman. 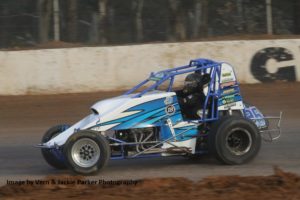 In Wingless Sprints Victorian driver Luke Schneider took a win in a battle against New South Wales competition leading a Victorian one, two three with Marcus Green and Todd Hobson in the top three then Andrew Seery from New South Wales fourth and Brayden Parr in fifth place. 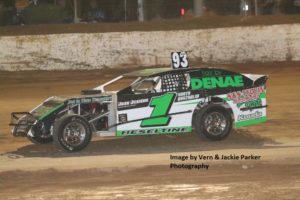 The Amca Nationals the final was won by South Australian champion Dean Heseltine from Tim Reidy who had charged from the back of the field with Paul Sullivan third then Frank Thierry and Neale Peachey.

For Junior Sedan racing Lachie Fitzpatrick took the win of the season ahead of Luke Cecil, Josh Cecil, Tristan McGraw and Toby Carmichael and in the GV Production Sedan action Shane Hutchins was never headed going onto win over his brother Bevan followed by Leigh Jeffery, Aaron Bacon and Mark Cecil who had done double duty in the finals with two different cars, one in the Opens and one in the Productions.