Super Sedan action took centre stage at Rushworth Speedway on Saturday night March the 9th with Peter Nicola leading home a great field in the Super Sedan Gold Rush feature event whilst Shane Steenholdt climbed to the top of the podium dais once again in LS1 Sprintcar racing at the Goulburn Valley venue. 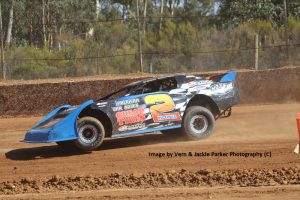 Peter Nicola won the thirty five lap feature event for Super Sedans when he defeated Neil Witnish by just under two seconds at the finish with Jamie Collins, Ash Bergmeier and Ben Faulkhead rounding out the top five finishers.

After qualifying action Witnish had put his race car in pole position for the marathon length race when you compare it to regular race distances in dirt track racing, Nicola started in second with Collins, South Australian Kym Jury, Faulkhead and Bergmeier the top six starters.

In a heartbreaking result for Witnish, he lead the race for the first thirty-three laps and with two to go Nicola made his move and shot through to the front and on to victory. Nicola felt for Witnish however a win is a win in competitive sport, especially those with trophies and cash up for grabs. “I would like to say well done to the Goulburn Valley club for bouncing back after recent adversity at the track and I do really feel for Neil, he has been a long time member with our class and I would have been happy for him to have gone all the way tonight, I am sure he will get me very soon down the line though,” shared Nicola.

Collins, Witnish and Queenslander Trent Wilson shared the qualifying race wins in the lead up to the final.

Sprintcar action from the LS Chevrolet powered version of the popular class finished with Bairnsdale racer Shane Steenholdt picking up a win with a large distance back to second-placed Adam Cullinger with Michael Evans and Craig Tucker the other finishers. 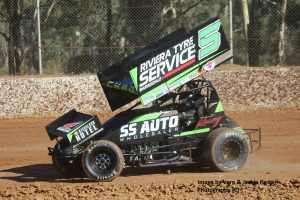 Steenholdt lead the first nine laps of the feature event before young gun Alistair Bastian took the lead. On lap twenty one, tyre damaged left Bastian parking his car infield and Steenholdt assumed command of the race to win the shortened twenty-three lap final. David Dennison, Daniel Orr and Steenholdt won the lead in qualifiers to the final.

Goulburn Valley Ladies Saloon racing finished with a win going the way of Kelly Lamb in the ten lap final ahead of Belinda Chalcraft, Nicole Gapes and Casey Alexander, with Lamb leading for the complete race distance.  Chalcraft and Lamb shared the qualifying race wins, with Lamb picking up two.

Jay Nicolaisen was impressive in winning the Goulburn Valley Open Sedan final after he had been knocking on the door of a win in recently racing. Nicolaisen in his Commodore won ahead of Carlie Wicks in the Hyundai with Peter Welch, Garry Gapes and Mark Bergmann rounding out the top five at the finish.

Wicks got off to a ripper start as she led lap one before Nicolaisen wound up the Commodore and regained the lead the very next lap around the circuit. Gapes was having a good battle with Darren Holt for fourth and fifth however the twelve lap race went past quickly with Nicolaisen getting the victory lap celebration. Paul Lamb, Wicks, Lamb again, Wicks again, then Nicolaisen and Gapes won the heat races in the lead up to the final.

Shane Hutchins in the Goulburn Valley Production Sedan number one car, won the Production Sedans once more this time defeating Leigh Jeffery, Troy Britton, Jaiden McCann and Geoff Lee at the end of twelve laps. Hutchins and Lee started at the front of the field with Jeffery and Reece Harris on the second row followed by Britton and McCann. Britton made some early moves and was in third by lap two and little battles during the field kept the race interesting right the way through before Hutchins greeted the chequered flag.

In the Junior Sedan final, Daniel Smith won a terrific little race with Luke Cecil whilst Josh Cecil and Cooper Laurie closed out the feature results.