The SDAV Hot Rod Club of Victoria headed back to Rushworth Speedway on April the 7th for their Victorian State title and in a hard luck story Shannon Meakins who was in the lead and likely to have held on for the win spun and handed victory to Michael Coad for his first Victorian title.

The results as of now are subject to scrutineering checks on engines at a later date, however, Coad provisionally is our Victorian champion ahead of Dean West, Meakins who recovered from the rear of the field to finish third and Stan Marco Snr and Jamie May rounding out the top five. 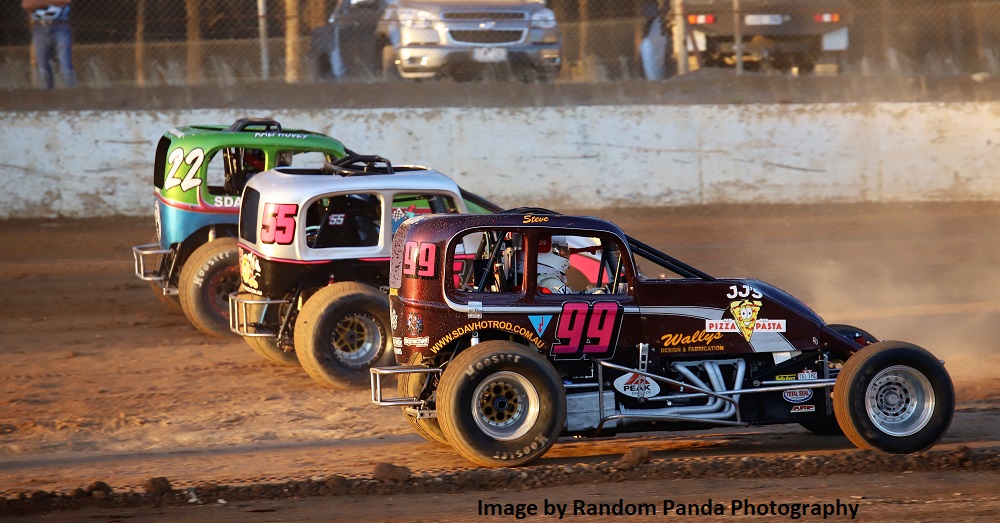 Coad jumped to the lead at the drop of the green in heat one with Marco Jnr, Jenkins (#3 P & S Automotive Services), Lawless and May chasing. Jenkins moved up a spot on lap two then May moved into third as Marco Jnr dropped back through the field. On lap ten Marco Snr passed Lawless for fourth. Coad came up with the win from Jenkins, May, Marco Snr, Lawless, Marco Jnr, Marco, Russell Hovey and Wilkes whilst Kali Hovey (#22 Pizza Box Norlane) did not finish with gearing issues.

Meakins assumed the lead of the race on lap one with West, Jenkins, Russell Hovey and May followed across the timing line on lap one. May (#8 Mega Auto Parts) moved into fourth on lap two passing Russ Hovey. The field remained stable for the next few laps before May passed Jenkins on lap seven and Jenkins got back passed soon after.

At the chequered flag, Meakins took the win from West, May, Jenkins, Lawless, Wilkes (#13 Pro Coat Powdercoat), Kali Hovey, Russ Hovey and Lee with Marco Jnr failing to start due to ignition issues and Coad didn’t get past lap one with driveline issues halting him.

Tom Marco (#11 Stich Concrete) and Stan Marco Snr started on the front row of the third heat race. Meakins, Lee, Russell Hovey, West, Jenkins and Coad was the line up for heat three with Marco Jnr unable to start due to his ignition concerns.

Marco Snr got the better of the start to take the lead on lap one and lead Marco, Meakins, West and Coad across the start-finish line. Meakins (#83 Kilmore Towing & Transport) and Coad moved up places on lap two and then Coad moved into third past Marco on lap three.

On lap five Coad got by Meakins as the race ran its course. The chequered flag dropped and West, was penalised two spots on his finish and the official result was Marco Snr, Coad, Marco, Jenkins, West, Russ Hovey (#25 Ribeau Interstate Transport) and Lee. Meakins failed to finish due to power steering failure. 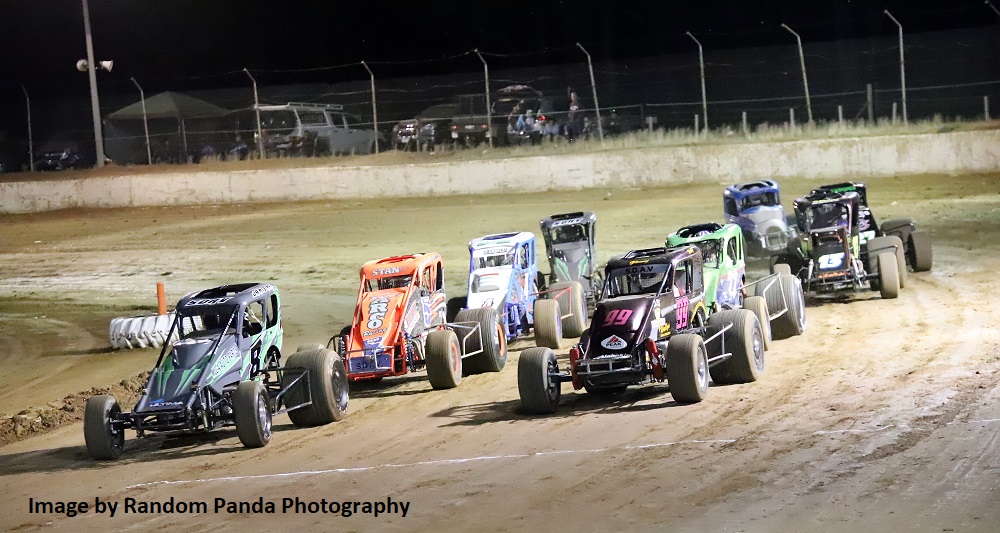 In the final qualifier, Marco Snr doubled up with another win after starting back on the third row. May and Lawless controlled the front row for the start with Kali Hovey and Wilkes, Marco Snr and Marco, Lee (#23 Lee Racing) and West and Meakins at the back.

Marco Snr quickly moved to the lead on lap one with May, Lawless, West (#4 Dandy Bolts) and Meakins behind him. West and Meakins both moved past Lawless on lap two and by lap five Meakins passed West into third place. Meakins took a couple more laps to get past May and moved into second as West pulled out of the race with ignition troubles on lap nine and Marco Snr went on to win from Meakins, Marco, May, Kali Hovey, Lawless and Lee. Wilkes didn’t finish due to driveline failure.

The field was set for the Victorian SDAV Hot Rod title with the line up from pole position back locked in as follows; Marco Snr, Meakins, Coad (#5 MN Industries), May, Jenkins, Marco, West, Lawless, Russ Hovey, Kali Hovey, Lee, Wilkes and Marco Jnr, unfortunately for Wilkes he could not start due to mechanical failure.

The green flag waved the field away and seventeen seconds later they returned across the line with Marco Snr leading Meakins, Coad, May and Jenkins to end lap one. Marco moved into fifth by passing Jenkins on lap two before spinning and sending himself to the rear of the field, unfortunately for Jenkins, he had nowhere to go and crashed into the spun Marco and with front end damaged his title race was over.

Meakins took the lead on lap four with Marco Snr, Coad, May and West the top five at this stage. Two laps later West got passed May into fourth place whilst the next lap Coad moved into second behind Meakins.

Marco finished his race on lap nine with a flat tyre and for the next half a dozen laps the drivers raced hard with no positional gains. Russ Hovey was next to pull out of the race on lap sixteen with the car breaking down and his daughter Kali had ended race with a broken gearbox, on lap seventeen heartbreak for Meakins as he spun whilst in the lead handing the mantle over to Coad.

On lap eighteen with seven laps to go Coad led West, Marco Snr, May and Lawless. A caution on lap twenty-two when Marco Jnr spun helped Meakins a little as the field bunched up.

The flagman waved the chequered flag at the end of lap twenty-five to signal a victory to Coad from West, Meakins had charged back in the last few laps to snaffle third on the podium with Marco Snr, May, Lawless, Marco Jnr and Lee the finishing order in a terrific race. 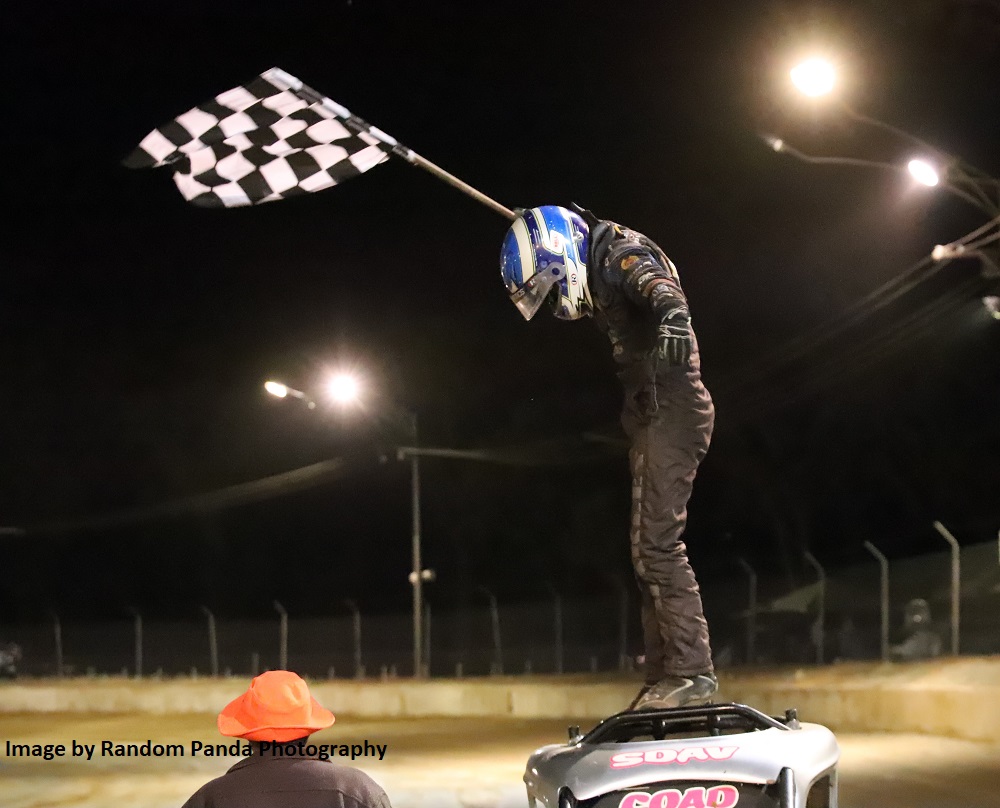 After the race, media spoke with the winner Michael Coad and asked him how it feels to be an SDAV Victorian title winner. “It feels great to win one, we didn’t have the easiest of nights, we broke the drive coupling on the gearbox to the engine in the second heat. This meant we had to pull the gearbox, seat and tail shaft out and weld it back together to be ready for heat three. We came from eighth to second in that heat, that was an important result for us.” Shared Coad.

He went on to talk about the title race itself. “Once we got to the final we started on the second row and just settled in and allowed a few laps to wind down before passing Marco Snr. Meakins was only a few car lengths ahead of us, however, I don’t think we had enough to catch and pass him, he was going strong. I was hoping later in the race traffic would help us however Shannon spun and put us into the lead, I really feel for Shannon, it’s tough to spin when you’re leading an important race, none bigger than the state title.”

Coad took the win of course and wanted to thank those that helped him. “I need to thank Jason Kavanagh for giving me the push to fix the car after heat two; we could have easily put it on the trailer. I need to thank Mario Nastasi my awesome car owner, my girlfriend Shannyn and Rob Brown who I can call for advice whenever I like, they are all terrific.”

The Hot Rods next race meeting is April the 21st at Nyora Raceway with two more meetings to go after that.