SDAV Hot Rods recently returned to Rosedale Speedway for competition in the Thunder Down Under series and in a great night of racing it would be the new children’s most popular of Shannon Meakins and his Spiderman themed rod that would take the win with last lap victory in an exciting end to the nights racing.

Three heat races were held in the lead up to the night’s final race with the Marco family taking a clean sweep with Stan Marco Snr winning the first two and Stan Jnr, the third qualifier. Dean West (#4 – Dandy Bolts) a former state champion in the class could not take a trick as he hit a wall in the first heat race and found himself in the infield bone yard before doing enough to get back on track for the second heat only to break a drive shaft and finishing his nights racing.

Meakins began heat one in the prime pole position with West alongside and Chris Wilkes, Stan Marco Snr, Kali Hovey, Russell Hovey (#25 – Ribeau Transport) and Stan Marco Jnr. Glenn Lawless was supposed to be in the field however failed to greet the gate keeper to enter the track for racing before the gate closed on him and missed out.

West crashed into the wall on the first attempt of lap one and on the second attempt Marco Snr got the better of the start leading Meakins, Marco Jnr (#11 – A1 Automotive), Russell Hovey and Wilkes. For ten laps that’s how the positions remained and Marco Snr took the win at the finish line.

Kali Hovey (#22 – Pizza Box Geelong) started the second heat at the front with Lawless this time eagerly making it out onto the race track for ten laps of fun. Marco Jnr, Meakins, West, Wilkes (#13 – All Head Service) and Russell Hovey. Lawless was ready to go and as soon as the green dropped he assumed the race lead from Marco Snr, Kali Hovey, Marco Jnr and West who then exited infield the next lap with the broken driveshaft.

It took until lap four when Marco Snr (#5 – Darby’s Paints) would take the lead from Lawless, Kali Hovey, Marco Jnr and Meakins and until lap nine for another passing move when Marco Jnr and Meakins passed Hovey as she dropped back to fifth. On the final lap Marco Jnr made a pass on Lawless and Marco Snr greeted the finish line ahead of Jnr, Lawless (#99 – Wally’s Fabrications & Designs), Meakins, Kali Hovey, Russell Hovey and Wilkes. 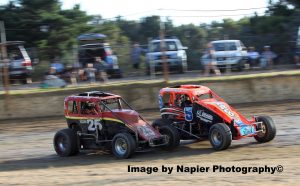 Action in the final qualifier began with Russell Hovey and Marco Snr at the front row with Marco Jnr, Lawless, Wilkes, Kali Hovey and Meakins the rest of the line up. Marco Snr held the advantage on lap one with Russ Hovey in second and Marco Jnr ahead of Lawless and Meakins (#84 Kilmore Towing & Transport). Meakins moved up a spot on the next lap and it all come unstuck on lap four when he spun and found himself sent to the rear of the field. At the restart attempt Russell Hovey spun and was also sent to the back of the field.

Moving to lap six and Marco Snr lead Marco Jnr, Meakins had recovered to third with Lawless and Kali Hovey following. On lap seven Lawless was passed by Hovey and on the final lap Marco Jnr pinched the lead from his father and won with Marco Snr, Meakins, Kali Hovey, Lawless, Wilkes and Russell Hovey following across the line. 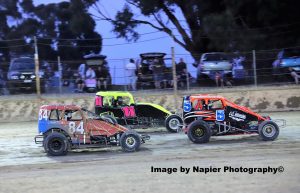 The pre-final coin toss to determine which end of the qualifying field would start at the front put the top qualifiers at the front of the field and this meant Marco Snr and Jnr were on the front with Meakins, Lawless, Russell Hovey, Wilkes and Kali Hovey completing the lineup.

Fifteen laps awaited the line-up and Marco Snr was quick to move into the lead with Jnr finding himself under siege and slipping back to fourth as Meakins and Russell Hovey moved past him.

On lap three Jnr began the claw back to the pointy end passing Russell Hovey into third however Hovey did not let in and a fine battle continued between the two as Hovey took back that third position on lap eight. Thirteen laps in and the positions between the two changed again as Marco Jnr moved into third and Kali Hovey pounced and moved ahead of her father into fourth.

The race came down to an exciting conclusion with Marco Snr in the lead. Ahead of Marco Snr and Meakins was some traffic and Marco Snr went high to go around the car and Meakins stayed low on the track and got the better of the drive out of the turn and the gap that opened up and went on to take the win.

They were followed to the finish line by Marco Jnr in third, Kali Hovey, Russell Hovey, Wilkes and Lawless all finishing the final. 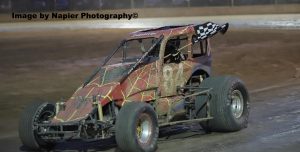 Meakins and the Spiderman car are certainly a child pleaser at the track with kids clamouring to the fence to wave at him as he rolls around with the chequered flag whilst the adults just love the look of the 34 Ford type body on the race cars, win, win for the SDAV Hot Rods.