Scott Whittle came from the fourth row of the feature line-up to pick off Jake Vuillermin who held the lead for a long time in the Standard Saloon final. Shane Steenholdt was just to good in the Sprintcar final taking the lead from teammate Mark Noonan with fourteen laps to go and surviving a slide job that went wrong from Justin Barton who crashed into the front left of Steenholdt impeding his run. Jason Degoldi continued his winning ways with another Street Stock win, Dale Smith proved too good in the Sports Sedans and Sean Lister won the Unlimited Sedan final. 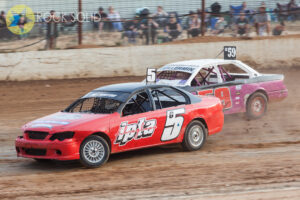 After six qualifying races Jake Vuillermin qualified in pole position with Hayden Clifford alongside him then Nick Chrystie, Hanna Domburg, Mark Seller and Craig Templeton completing the top six starters. Vuillermin was the only driver to win two qualifiers when he won the second and the sixth with Hanna Domburg, Clifford, Chrystie and Whittle won the others.

Vuillermin went straight to the lead, Clifford and Chrystie had a little five lap battle that Chrystie got the best of and by lap five Whittle had moved from seventh to third. With a further eight laps completed Whittle then moved into second place to chase Vuillermin. On lap eighteen Whittle took control of the race and at the twenty-five-lap finish mark Whittle had won by .255 of a second from Vuillermin, Chrystie, Clifford and Matt Domburg.

Twenty plus Sprintcars competed in the second of three feature events that the class will compete in for the season. At the end of the six qualifying races Mark Noonan qualified at the front with Steenholdt his teammate. Chris Rodda, Shaun Lyness, Justin Barton and Adam Greenwood rounding out the top six starters. Rodda, Steenholdt, Greenwood, Noonan, Lyness and Barton made it six different winners in the qualifiers from the six races. 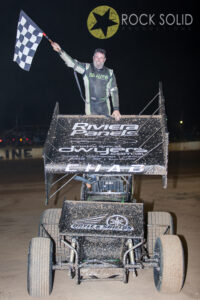 Noonan who had flown in from Western Australia where he works led lap one to eleven before Steenholdt moved passed him as Lyness and Barton followed through behind him. Barton on lap fourteen passed Lyness and began the chase of Steenholdt. Greenwood was on a charge and he moved into third by lap nineteen. With two laps left to go Barton tried to make a turn one slide job on Steenholdt to take the lead, unfortunately the cars touched with Barton being deemed to have impeded Steenholdt.

At race resumption Steenholdt continued to lead Greenwood and Alistair Bastian who was fifth when the restart began flew around the outside of Rodda and David McKay at the top end of the track to finish in third. The result was Steenholdt, Greenwood, Bastian, McKay and Rodda.

In Sports Sedan action Dale Smith took the feature race win. For some time, Craig Phillips took the action up to Smith after early race leader Shane Kruger dropped out of contention. Starting last Zac Swanson was quickly into the top five and with six laps to go he had moved into second. Smith after a late race caution hit his mark every lap with five to go and Swanson just could not get close enough to him. Smith took the win from Swanson, Phillips, Jay Dickson and Kruger. Earlier Phillips won a heat, then Smith won the next two heats before Kruger win the fourth and final heat.

Jason Degoldi continued his winning ways in Street Stocks this time picking up a feature race win by less than a second in front of Mick Dann, with Dale Blomeley third from Shaun Henry and Brooke Ferguson. Eugene Bennett was second for a long way however contact just as the race was concluding put him and Brad McClure out of the feature results.

Sean Lister won the Unlimited Sedan final ahead of Trent Susol who was competing in his second car. Tim Williams picked up another third-place feature race finish after collecting a podium late last season with Travis Ramsdale in fourth with Jimmy Harris fifth.

Racing returns to Redline on February the 1st for the Duo Mobile Eliminator for Street Stocks and Sprintcars once again.