With the New South Wales and South Australian Late Model Racing title already in his current collection, Lachlan Onley travelled from NSW to Redline Raceway to claim a third current state title as he defeated twenty others including Todd Bayley from his home state and Brendan Hucker who has a long standing connection with racing at Redline.

On the same evening Andrew Burgoyne proved that towing your race car to Queensland to have it washed and returning back to Victoria was a smart move in his Street Stock campaign as that Queensland water must have made his car so sleek that it cut through their air and onto a win, Chris Rieck picked up a Sports Sedan win in a close finish and Scott Whittle broke records through the night in Standard Saloons as he went on to pick up another trophy. 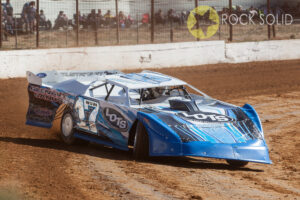 A thirty-lap championship race followed with Onley, Pearson, Bayley, Chevy Edwards, Tasmanian Champion Tim Pyke and American Joe Lusk the top six qualifiers. A great start by Pearson from the outside row seen him lead lap one action. Lusk picked off a couple spots early moving not fourth with Onley whizzing past Pearson and back to the lead. Pearson and Bayley engaged in a duel before Pearson dropped back and Lusk took advantage of the action between the two. Pearson dropped out a third of the way in and from eighth place, Hucker was making traction as he moved to third on lap ten. 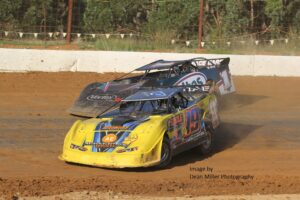 Onley lead all the way to the end of a gruelling race with stoppages and seven competitors failing to finish including the outgoing champion Chevy Edwards, Pearson, Lusk and Pyke. Onley claimed victory from Bayley, Hucker, Disney and Brock Edwards seeing the state title head to NSW.

In Standard Saloon competition Geelong businessman Scott Whittle set a new one lap and eight lap record in the first race of the categories evening. His one lap record of 16.823 was .4 of a second quicker than the old record. Whittle then won the feature event finishing in front of clubmates Hayden Clifford and Mark Seller with Ballarat woman Priscilla Grech in fourth and Ben Hutchinson fifth.

Leigh Bourke won all three of his qualifying heats in the Sports Sedans whilst Chris Rieck won two of his three and Ballarat man Zac Swanson the other. Rieck set a new eight lap record in one of his victories before going on to win the fifteen-lap final ahead of Ballarat racer Ricky Ashmore, Bourke from Bannockburn, Kayla Knox and Matt Chiminello. 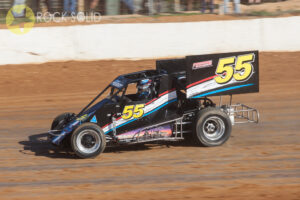 Jason Degoldi won two of the three Street Stock qualifier’s with Scott Purdie winning the other before Purdie’s father in law banked bragging rights for the next couple of weeks by taking a popular victory in a fifteen lap final in front of Jason Degoldi, Purdie, Brooke Ferguson and Jamie Crutchley. Burgoyne led every lap of the race across the start finish line and earnt high praise from his competitors as one of the most popular members of the class.

In Ballistics Performance Parts Masters Series Grand Prix Midget action, Trevor Perry and Jason Crawford had a great early race battle exchanging the race lead in the final between them. Perry eventually ran away to the victory from Crawford, Chris Fowler, Alex Myers and Troy Buis.