Sprintcar action returned to Redline Raceway and fans were treated to a sensational ‘Eureka Garages & Sheds’ series feature race event with a finish splitting the top three cars by just 1.116 after thirty hectic laps around the super track on Buninyong. Brett Milburn from the Peninsula Bay area down Frankston way took a win ahead of Terry Rankin and Chris Solomon when the racing was all run and won.

Milburn qualified for the feature race on the third row of the feature race grid with Peter Doukas, Rankin, Grant Stansfield and Brayden Parr ahead of him and Solomon way back in eleventh on the grid. 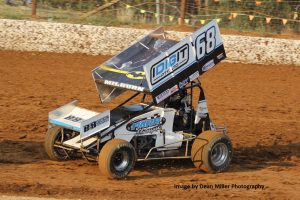 Milburn picked off one position on lap one, another on lap six as he moved into third place whilst on lap ten Solomon had moved into eighth. On lap nineteen Milburn moved to second behind Rankin and storming along Solomon had moved to third gaining another five places forward in the previous nine laps.

With four laps to go Milburn took the lead on lap twenty six and then as Ranking through everything back at Milburn as they worked through traffic, Milburn just made the right decisions at the right times to go on and secure his feature race win from Rankin, Solomon, Brayden Parr and Rhys Baxter.

After the race Milburn was thrilled to win. “I really enjoyed that race, bad luck to Terry who obviously leading for so long deserved a win, however our car was good, my crew did a sensational job with the set up and here we are in victory lane. Thanks to the crowd for coming out and supporting us here and I hope we can organize more than one show a year here in the future,” shared Milburn.

Lap records were set for one lap and ten lap distances during the night with Corey McCullagh running 11,425 for one lap and Parr 2 minutes flat almost in the ten lap heat races. 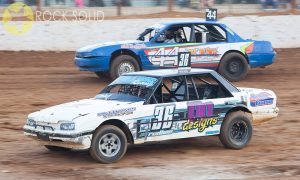 In the supporting Sports Sedan class home track club members filled the top three places across the finish line whilst Ballarat drivers completed the top five. Craig Phillips won by just .264 of a second at the finish line in a hard fought battle between the two drivers most likely fighting it out for Sports Sedan season point score honours at Redline, Phillips and Daniel Carter. Carter had to account for Ricky Ashmore to take second as Ashmore dropped out of the running and as he passed the chequered flag Danny Spurr was a long way off finishing in third with Darren Ward and Peter Hoggan rounding out the top five.

Todd Moule and Darcy Wilson were the two quickest Junior Sedan drivers in the Speedway Sedans Victoria Junior Sedans and they fought a terrific battle through the evening with Wilson coming out ahead in the final from Moule, Jaxon Vella, Holly Harris and Fletcher Barron.

In the 3 Litre Sedan series round Andrew Ahearn took another close and hard fought victory on race night with just .476 separating himself from Micka Boyle. Ballarat racer Ross Burrows finished third ahead of Steve Ellis and Graeme Gerlach was back in fifth place. The top three held their positions right through the race across twelve laps.