Leigh Bourke the current Victoria # 2 driver in Sports Sedan racing has picked up a handy result in the first round of an important three round Sports Sedan Stampede series for his class at his home track and club Redline in Ballarat on January 12th.

Thirty plus drivers nominated for the event with competition from Mildura down to Geelong via Bendigo and from Melbourne’s South East Suburbs across to their east all nominating to compete in the first of three rounds. 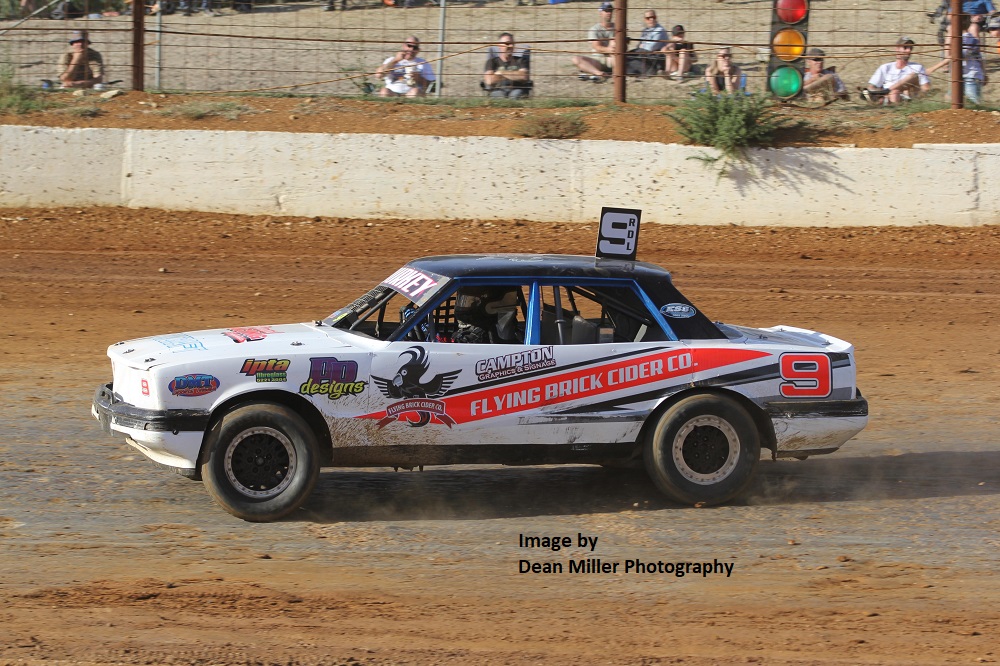 Bourke’s toughest competition was expected to be Daniel Drewett, Jamie Lock, Mick Rizzoli and Brendan Miller and at the end of the night Bourke finished on the feature event podium with two of them.

Prior to the event and having finished second recently to Jacob Drewett at Swan Hill in the same car Daniel Drewett was driving at this event, Bourke changed his manifold and carburettor to get a little extra power out of his Cortina.

In Bourke’s first of three heat races he found himself up against proven winner Brendan Miller and new young un of the class Ricky Cornwall whilst veteran Wayne Alberni and top performer Lucas Conder were also in the field. An issue with the float level in the carburettor left the car running out of fuel as it worked its way through the corners and whilst the car handling was good he could not keep with Miller and Bourke finished in second, a good result considering the float and starting back on the third row.

Moving into the second qualifier Bourke again had competition from Cornwall. Despite not being completely happy with the set up of the carburettor once again, Bourke would motor on to an almost seven second win ahead of Cornwall after starting from the outside front row.

It was in heat three that Bourke would come up against Drewett. With the carburettor now sorted out and running correctly between heats where Bourke also made a slight change to tighten the car up for slick track conditions, the number 9 Cortina moved to the front of the race for lap one. On lap two and running the top, Bourke left the door open for Drewett to go to the bottom and drive underneath and into the lead. Bourke tried hard however chased Drewett to the finish where he finished just .273 of a second behind the winner.

Before the feature race Bourke tweaked with the rear tyre pressures to tighten the car further for the slick track where he would start from third position behind Drewett and Rizzoli. At the drop of the green, Bourke moved past Rizzoli on lap one and set about the battle with Drewett.

The car had satisfactory speed and the set up was right, however the track had gone away further as the race went on with little to no chance to pass unless the leader made a mistake. The laps ran out and Bourke finished with a second in the first round of the Sports Sedan Stampede Series.

After the race we had a word with Bourke. “Firstly thank you to the sponsors group of the series, their efforts no doubt promoted more competitors to come to our track tonight. Thank you to the continuing support from my terrific sponsors and thank you to my family and friends who chip in on race night to assist with the car and preparation. I really enjoyed the competition against the Drewett car and hope to try and go one better against it next time we meet.”