Late Model racing in the Firecracker 5000 included drivers from Queensland, New Zealand, South Australia and across Victoria with local’s historically involved with racing at Redline including Will Lamb, Danny Amato and Brendan Hucker, the latter of whom would go on to finish third in the race.

Alexander won the first of his two heat races ahead of Chevy Edwards by almost five seconds with Gary Bryans winning the second by just .317 of a second over Hucker, then Queenslander Watson finished ahead of Edwards in the final qualifying heat race.

After the track slowed down for the final heat, it got faster again as some moisture came back to the track from the night air and underneath the clay. Alexander was quick to get to the front of the field With Bryans and Watson in tow. At lap five, Watson made a terrific pass on Bryans who would exit the race a couple of laps later. 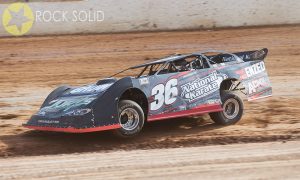 The top three of Alexander, Watson and Hucker remained the order from lap seven onwards as behind them Brock Edwards and Mick Nicola moved forward. When the race ended at lap twenty Alexander had won ahead of Watson, Hucker, Brock Edwards and Nicola.

In the Victory Lane Racegear LS Cup Sprintcar action, David Dennison made his intentions clear with a fantastic win ahead Victorian Champion Mark Laity in the first race having come to Ballarat from Bairnsdale with fellow Bairnsdale racer Steenholdt winning the second heat race and his teammate Alistair Bastian won the third qualifier with racing getting faster through the three races.

A twenty lap nonstop final for the Sprintcars seen Steenholdt get out into the front early and from there the rest had a chase on their hands. He finished five seconds in front of the nearest competitor with Bastian second and Adam Greenwood in third. Jason Langdon and Dennison rounded out the top five.

A large field of Sports Sedans attended round one of the Mental Racewear Stampede series and for some they wished they had of stayed home, Cameron Impey and Tom McKenna whom both crashed out with damage could be forgiven for thinking they should have stayed home whilst from twelve qualifying races Mick Rizzoli, Drewett and Jamie Lock won half of them between them. 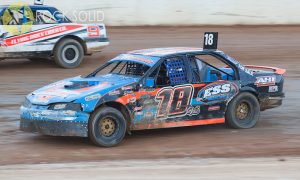 Drewett took off early before Leigh Bourke passed by, Tim McPherson moved ahead of Ricky Cornwall early in the race before trying to get the better of Andrew Jordan. Results went the way of Drewett as he crossed the line with Bourke, Rizzolli, Jordan and McPherson completing the top five.

In the support class, Standard Saloons Marcus Reddecliffe won ahead of Chris Carvill, Jack Brennan, Shell Sinclair and Lachie Chivers rounding out the top five. Street Stock results went to Brad McClure from Darren Forrest and Jason Degoldi, with McClure and Deolgdi both from the local club chasing each other for the club champion in their class at the end of the season.