This weekend’s racing at Nyora Raceway had its ups and downs as the club tried valiantly to get a race meeting in after Saturday night’s rain and before Melbourne’s Monday thunderstorms, and on Sunday they almost completed a forty-five plus race schedule with just two and a half events missing out. In the end, the crowd got to see Jamie Paull win the Ramsdale Wreckers Sports Sedan Showdown, brothers Linken and River Paterson win the SSA Junior Sedan Cut and Core Cup for Top Stars and New Stars and father and son combination Jeff and Mitch Blencowe win the Standard Saloon 20/20.

Other winners included Hayley Hutchins in Ladies Standard Saloons, Harry Cecil in the Junior Standard Saloons whilst Crash and Bash and Wingless Sprints were beaten by the rain despite finishing all qualifying races. 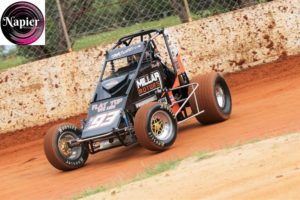 The Wingless Sprints were supposed to compete in rounds one and two of the ‘IDigIt & ML Automotive’ track championship for the weekend, as it happened, they got the qualifying in on Sunday for round two after the round one wash-out the day before. After nine qualifying races, Travis Millar was the top point scorer from Ben Polianksy, Kim-Loong Gosling, Travis Evans, Samantha Millar and Aron Lawrence. The King of Nyora Millar will lead the point score heading into the next round later in the season. 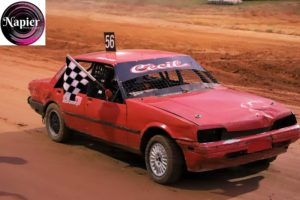 Heartbreak in the Junior Standard Saloon final for rookie race driver Nathan Miles who finished first across the line only to be penalised one position for a racing incident where it was deemed, he hit another driver during the race. Harry Cecil was elevated to the win from Nathan Miles, Riley Lawrence, Cody Drennan and Matt Shankland. Damon Ingram qualified in top position however was unable to start as the car had some mechanical issues his team were still trying to sort as the field entered the racetrack to compete. 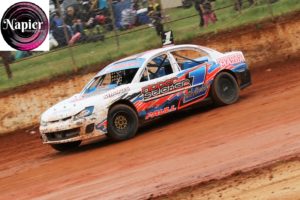 In the Sports Sedan Showdown Jamie Paull continued to prove the current best at the Nyora Club. Increased car registrations at Nyora in the class is going to see a great season for the Sports Sedans at the venue. Paull defeated late entry David Donegan, Jayde Aarts, Jake Young and Jeff Blencowe. Donegan tried hard to keep the pressure on Paull, however, Paull’s set up was sensational and his Commodore sat beautifully on the track.

Hayley Hutchins made it two feature wins in a fortnight when she won the Ladies Standard Saloon final from Kayla Saunders, Sharlene Laidlaw and Colleen Keating. Hutchins was dominant in the final event. 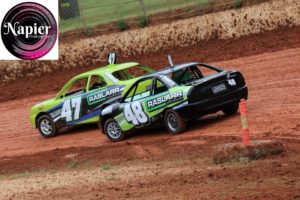 The Speedway Sedan Australia Juniors feature event was a great tussle between Jayden Bryant and Linken Paterson. Both had the lead of the race before Paterson assumed control and drove away to the win from Bryant and local racer Zoe Young. River Paterson was fourth across the finish line ahead of Kiarna Barton for the overall result. Top Stars top three were Linken Paterson, Bryant and Young whilst the New Stars top three were River Paterson, Toby Parks and Jessica O’Donnell. Daniel Attewell crunched the concrete wall during the race, and he was taken to hospital for a check-up and is reported to be sore, but fine.

The 20/20 Standard Saloon feature is growing in stature with some impressive combinations for the nights racing. Marcus Reddecliffe and his teammate Dale Hallett qualified for the final to start from pole position. He had Brendon and Mark Miles, Shane Ardley and Stephen Douglas, Chris and Andrew Miles, Mitch and Jeff Blencowe and Graeme and Tim Hutchinson qualifying in the top six around him.

In the twenty laps right hand down around the Speedway, Hallett started well for his team. Brendon Miles and Andrew Miles were having good runs as was Douglas early in the race. From fifth in the line-up, Mitch Blencowe had the best run going and as the twenty laps wound down, Blencowe picked off Douglas, Andrew Miles, Brendon Miles and then on the last lap he picked off Hallett and crossed the finish line giving his team the race lead.

A pit stop in the infield in front of the crowd where the drivers changed to their teammates put Jeff Blencowe and Marcus Reddecliffe from the front row. A stoppage on the first attempt to get the final twenty laps underway and then the rain coming in and sending the whole field ice skating into turn one finishing with the field all parked facing every which way ended the race. 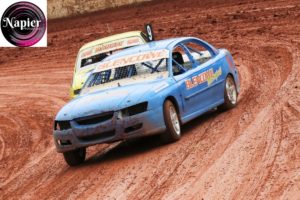 A check of the rule book where it states that fifty per cent of the race being finished constitutes a result, the Blencowes were given the win ahead of Hallett and Redcliffe. Chris and Andrew Miles finished third with Mark and Brendon Miles in fourth and Graeme and Tim Hutchinson finishing fifth.

Nyora Raceway returns to action on November the 23rd with Modified Sedans the feature event and the visiting Hot Rods.