Maverick Racing headed to Mildura to the Timmis Speedway facility for the latest Modified Sedan event on their schedule, this time the Victorian Title. With twenty-nine competitors to do battle the Fitzpatrick family set steppingstone goals for the two-night show that ended in making the title race.

Driver Lachlan Fitzpatrick’s first task was to get through night one of racing before the re-assessment was to qualify in the top dozen of the field by getting through night two qualifiers. From there the team set a goal to finish in the top ten of the Victorian title race. 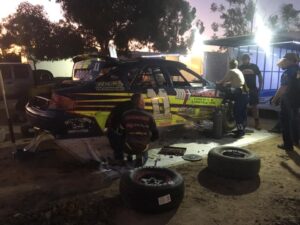 On night one Fitzpatrick finished the two heats he was allocated before finishing a mini feature on night one that also was for points.

Before the first race after inspecting the race track the team decided to free the car up slightly to allow for some greasy conditions. In the first heat race Australian Champion Kye Walters was the winner with a trio of Mildura racers ahead of Lachlan, in Jake Drewett, David Smith and Martin Hawson. The team finished just three seconds off the lead in a fast ten lap race and were faster than four others in the race and passed Taleah Dolic during the race.

The track started to take a different look about it with some roughening up after a few heats and some other support class racing so the team had to work to keep on top of the conditions for heat two. Fitzpatrick started sixth in this race and finished fifth. Wade McCarthy won this one with Andrew Blackwell, Jake Drewett, Todd Atkins in front of Fitzpatrick who passed Paul Hayes during the race and briefly sat in third spot. A highlight for the team was being faster than Graham West, a legend of the sport and a racer Lachlan admires.

In the first night preliminary final with points up for grabs Fitzpatrick qualified seventh for his race and finished in seventh behind Drewett, Brody Chrystie, Blackwell, Aaron Bunton, Matt Nelson and Brisbane racer Darren Lester. Fitzpatrick passed West on lap ten on his way to locking down seventh and finished ahead of the likes of Rachel Pratt, Dolic, Hayes and West.

With very little contact on the first night the team did a check over on the Sunday morning of the car to see if everything was good with the Falcon and made minor preparation to the machine. 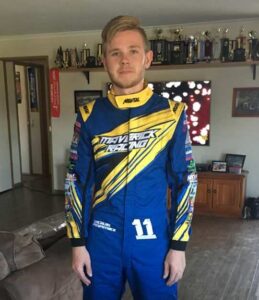 behind David Smith and ahead of Peter McCarthy and Todd Atkins to name a couple. Fitzpatrick was third fastest on the timing monitor in this one with McCarthy a little faster.

Heat four the final qualifying race for the title event had Fitzpatrick in position four after some competition failed start allowing Fitzpatrick to start higher in the line-up  Fitzpatrick finished behind Blackwell, Lester, Cameron Waters, Todd Atkins and he was not far off the pace and thought the car handled the best it had all season so far.

With some drama to other competitors who could not start the final or had to start rear of field, Fitzpatrick moved from twelfth top qualifier to starting the final in seventh spot, in a great position to move into the final five which would have been a dream result.

Australian Champion Walters the top qualifier had to go to the rear of the field when he jumped in another car due to engine issues in his main car. Bunton, Hawson and Todd Atkins all did not start the title race.

The race got underway and on lap three an early tangle with two other competitors seen Fitzpatrick spun onto the infield.  Stewards deemed Fitzpatrick the cause of the stoppage he was sent to the rear of the field for the re-start. Fitzpatrick passed Toby Carmichael, Paul Hayes, Ang Halacas on is way back to tenth on lap fifteen before the car started to overheat and on lap twenty Fitzpatrick parked infield at just over half race distance.