In the searing heat that has covered Victoria, Maverick Racing travelled to Horsham’s Blue Ribbon Raceway for the latest round of the Victorian Modified Promotions Association ‘Tritech Lubricants’ series and the hard working volunteers and track team gave a warm welcome to the team at another venue Lachlan Fitzpatrick had never competed at. 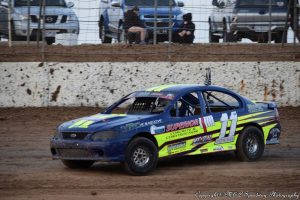 The first thing Crew Chief Peter and driver Lachie wanted to see was the track given the weather. The team found that the track crew had poured plenty of fluid into the surface with the plan on the track still being sticky later in the evening. It did however mean the first heat was going to be tough going and hard to gather information from with regards to set up.

Starting from position five in the first qualifier and finishing sixth behind current Victorian champion Daniel Simpson and current Australian champion Kye Walters was hard work. Back in the pit enclosure after the race the team changed a few bits and pieces to try to get the car handling better and boost the driver’s confidence in the machine on this track.

Qualifying off the back of the feature, with a track unlike anything the team had come across before, Peter and Lachlan tried to come up with ideas on what could help them find another half a second to a full second a lap in pace. The decision was made to use a slick set up to try and find some kind of drive.

After a cautious start in the thirty lap final, Lachie found a groove and another half second of pace and progressed through the field moving into position six by lap eighteen ahead of some seasoned class veterans. With a third of the race to go, the radiator hose blew in the boot of the car and Fitzpatrick had to guide the Falcon infield and out of the race.

Lachie spoke after the race. “We worked hard during the night to try and find what our competitors already had, pace. We got there in the end and I must thank dad so much for what he is teaching me. I was enjoying that race and to have a hose let go is disappointing, however it won’t be the only disappointment in racing we will come across. We will be right to go again for the next show. I want to take this opportunity to thank all our sponsors for assisting us. We as a team really appreciate you and we hope you are proud with how we are presenting ourselves on your behalf.”