Lachlan with his car

The Maverick Racing Team and driver Bendigo’s Lachlan Fitzpatrick headed to Victoria’s West where they competed in what would be Lachlan’s first ever Victorian Modified Promotions Association ‘Tritech Lubricants’ state series event against a tough field of seasoned veterans including Bendigo legend Graham West and team sponsor Brad Wicks.

Rain all day Saturday and overcast weather hanging around the Western Speedway in Hamilton meant a heavy and hooked up track for a majority of the nights racing.  An exciting proposition for the first time out with the series.

After starting seventh in the first qualifying race, Fitzpatrick finished in sixth in a race that included Queenslander Shane McDonald who won. After a quick chat after the race the team decided to stick with the set up to move into the second qualifier. In this race a fifth placed finish behind winner Brody Chrystie and former Australian champion Andrew Blackwell was a result to be proud of.

Before heading out for the third and final qualifier the team Crew Chief Peter Fitzpatrick decided to loosen the car for a bit more drivability.  Finishing in seventh in the final qualifier wasn’t the result the team was hoping for; however, everybody in this line-up was having a great run in a tough field with Matt Gerlach the winner and current Australian champion Kye Walters finishing mid-pack. 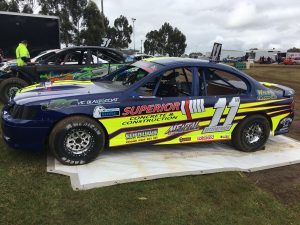 Fitzpatrick was happy with the how the car felt, and the team decided to run with the same set up for the final over thirty laps.

Starting the final from eighteenth position and getting off to a solid start an early race caution period allowed a sprinkle of rain to make the track greasy for all.

Soon after the restart an incident on the back straight whilst Fitzpatrick was thirteenth caught the driver out amongst the damaged cars. Nothing could have been done to avoid the bingle and the car suffered a little panel damage and bent suspension that will require some hours in the shed this weekend before the next event at Nyora in two weeks’ time.

The race was declared with the weather settling in, Fitzpatrick officially classified thirteenth.

Speaking with Kellie Fitzpatrick half of the Maverick Racing ownership principles, she and her husband Peter where very proud of how their son drove.  “There were some fast cars out there and for a 16y old to maintain composure at this level of racing is nothing short of amazing” shared Kellie.