The Street Stocks were competing in the Victorian Street Stock Series (VSSS) round for the ‘Shannon’s Insurance Street Stock Rumble’ event. Almost thirty race cars competed with drivers from South Australia, across Victoria and an entrant from New South Wales.

Nine qualifying heats were completed before the line-up for the forty-lap feature event was decided. Shane Roycroft, Zoe Salau and Jason Degoldi won first round qualifiers, Salau having never competed in the class in a blue-ribbon event. Lock, Adrian Lawrence from the Latrobe Valley and Eugene Bennett won the second-round qualifiers. Shaun Henry, Lock and Lawrence won the final round qualifiers.

Roycroft eventually succumbed to damage and that left Lock putting the pressure on Lawrence. Lock found a gap and took the lead, Lawrence took the lead back and then it went back to Lock finally who took the field to the finish line with Lawrence in second, Warrick Howie in third, Jayden Blomeley in fourth and Jason Duell fifth.

After the race Lock spoke about the Nyora venue. “I loved it; this is my style of racing. It is a racers track. Thank you for the efforts of all the volunteers and the welcoming attitude of the club. We all appreciated it very much, respect earns respect. Well done to the other competitors who podiumed and thank you to the series organiser and all my crew for everything you all are doing.” 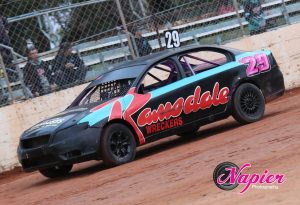 The ‘Somerville Auto Care Skirts in the Dirt’ feature for Ladies Standard Saloons was highly competitive with the back to back Victorian champion Trish Dike in the line-up for the first time this season, plus Hanna Domburg from the Portland club, Sara Benson a strong local contender along with Ash Wilson and Hayley Hutchins.

After four qualifying races to set the field the drivers to beat were Dike and Benson and Dike assumed the lead early as Benson stuck right with her trying to pressure Dike into a mistake. The longer the feature event went, the stronger Dike looked in front. It wasn’t until an accelerator cable stuck giving Dike a fright as she headed straight towards the turn three wall before she could pull the car up, that she lost the lead.

Dike attempted to re-start at the rear of the field and fix the issue however that did not work out for her. Benson then controlled the race from there with some early pressure from Hanna Domburg. Wilson was clear in third ahead of the rest of the field and when the chequered flag dropped Benson was the winner from Domburg, Wilson, Hutchins and Emily Ayre.

In VSC Sedan racing Daniel Angus whom was recently cleared after a medical clearance came forward took a great win that was popular in the crowd and emotional at the presentation for the young man. Angus defeated Bailey Perkins who made a sensational passing move to take second spot from Matt Sgroi, Kayla Knox who was the early race leader and Troy Glassborow. 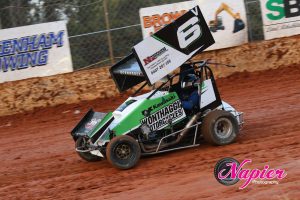 The Mini Sprintcars also affiliated as Lightning Sprints, were having their first hit out at Nyora in preparation for the upcoming Australian title at the venue. Darren Schnoor would take the win with Michael Conway second, Jason Lynn, Ally Moore and Maureen Sell rounding out the top five.

Mark Miles was strong at the front of the Open Standard Saloon field ahead of his brother Chris Miles. The two were weaving in and out of some backmarkers when a race incident with Matt Saunders ahead of the two got caught up in a tangle with the leaders. The race was declared, and Mark Miles was declared the winner in front of Chris Miles, Justin Hutchins, Robbie Noonan and Steve Danks.

Junior Standard Saloon racing confirmed what we had been thinking, there is another new star in the Ingram family from Warragul, Damon. Damon Ingram ran the night three and four wide around the top of the racetrack as he dominated the class. In the final Ingram defeated Harry Cecil, Matt Shankland, Nathan Drew and Bailey Bennett.

Finally, Logan Mair was declared the winner on front of Jess O’Donnell and Daniel Attewell in the Speedway Sedan Juniors.