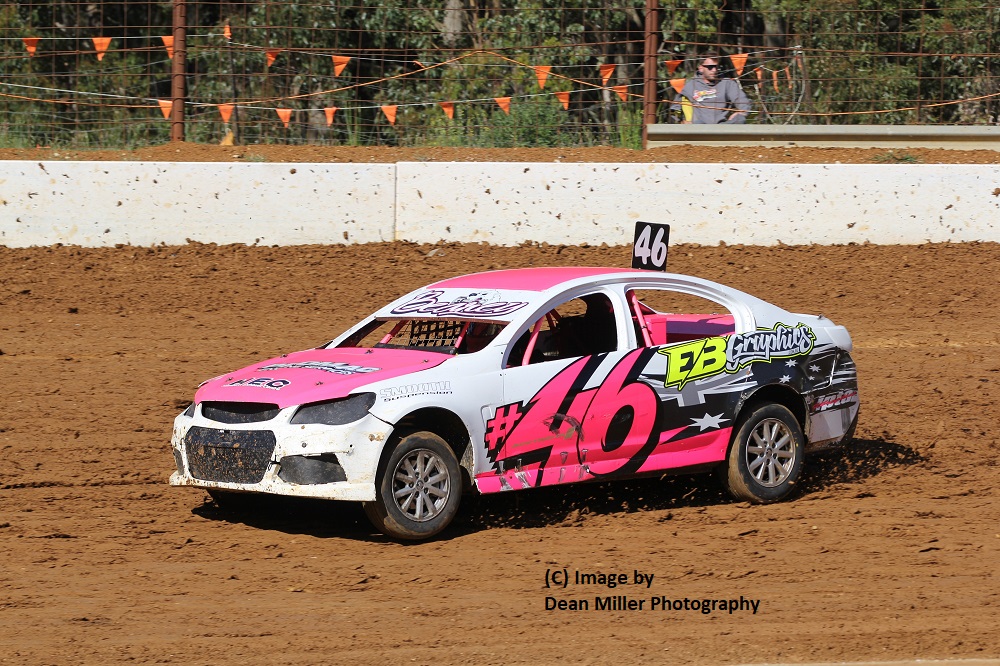 Redline Raceway played host to forty plus Street Stocks when the 2018 edition of the ‘Ipta Fibreglass’ King of the Mount was run and won on Saturday night. The night ended with South Australian Anthony Beare winning yet another Crown retaining his strangle hold on the event whilst in Junior Sedan racing Ben Micallef and Jaxson Vella picked up Piston Cup wins in the All Star and New Star classes.

Drivers in the King of the Mount had to survive fifty laps in the feature event, pre event many drivers were concerned that their 30 litre fuel tanks might not complete the distance, especially if there was a large amount of caution laps added required to clear up race incidents. Not only did they easily complete fifty laps, forty four of them non-stop, they came out at the end with half a tank of fuel remaining. 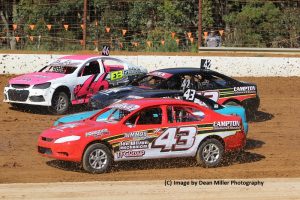 Just five of the twenty one competitors failed to finish the race, a race that Anthony Beare and Matt Nelson both lead in the early part of the race before Beare made a statement that he was not ready to hand over his crown and that everybody else had some work to do this year if they want to win championships.

Jason Degoldi, Mark Jennings, Jamie Lock and Brad McClure had a significant battle going on for third through to sixth before Mick Dann threw himself into the mix bringing Steve Gartner and Jayden Edwards along with him.
Beare stretched his lead later the race and won at the very end by almost seven seconds, Nelson held on for second from a fast closing Degoldi, Jennings, Lock, Dann, McClure, Steve Gartner, Edwards and Dale Blomeley.

After the race, Beare was full of praise for everybody in the final and the host venue. “For everybody to go out there and race as hard as we did without carnage in that fifty lap final, it is a credit to each and every driver. Of course, the track as it always does gave has plenty of racing room. Thank you to Redline for continuing to host big events for our class, thank you to all my supporters and crew and to Lenny Bates who was a big part of helping us find a little more this car tonight.”

Earlier in the qualifying races Greg Parks car came out second best after hitting concrete exiting turn two, McClure set a fast lap of the night of 16.513 as one of five drivers successfully breaking the 17 second mark and Beare won all three of his qualifying races and six races finished with less than a second between the winner and the second placed driver, the closest being the .089 margin between Beare and Mick Dann in the sixth qualifier. 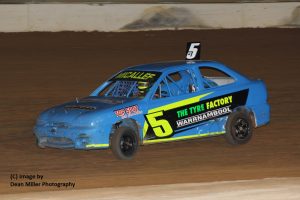 In the Piston Cup All Stars race for Junior Sedans Ben Micallef and Mitch Glynn dominated. They took their battle clear away from the field. Micallef assumed the race lead from the drop of the green, Glynn chased him and Kasey Garlick held the third place ahead of Todd Moule and Darcy Micallef. With the leaders out front and clear from the pack, Moule made a pass on Garlick and later on the same lap so did Darcy Micallef. When the chequered flag waved, Ben Micallef won from Glynn, Moule, Darcy Micallef and Garlick.

All three of the qualifying races were won by different competitors with the eventual winner of the race Micallef, not one of them and the closest margin was the .65 by Garlick over Ben Micallef and Glynn in heat three where Jye Irving and Kasey Ferguson’s cars suffered damage as a result of a back straight high speed collision from Ferguson as Irving tried to exit the track with a mechanical breakdown. 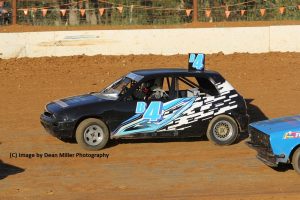 The New Star Juniors final deservedly went the way of Jaxson Vella after he won all three of the qualifying heat races. Bailey Rumler was closing in on the leader in the latter stages of the race, however the laps ran out and Vella took the win by seven seconds, Rumler finished second and Lachlan Bull, Connor Claridge and Cody Blomeley completed the top five.

Sports Sedan competition finished with Mick Rizzoli in his new race car win from Chris Reick, Daniel Carter, Kate Meyer and Darren Ward completing the top five, Unlimited Sedan’s top three finished with Darren Nelson winning from Cameron Impey and Sean Lister and in Standard Saloons Dean Pederson defeated Patrick Walsh and Joel McInnes making it three wins from three starts for the night for Pederson, Disaster for Shell Sinclair who crashed her new car hard against the concrete and put herself in hospital with pain that needed to be checked.