The Grand Prix Midgets returned to Rushworth Speedway with the largest field of the season comprising fifteen entrants for another round of the Ballistic Performance Parts Masters Series and Danny Stainer would leave the Goulburn Valley venue as the winner after a hard fought feature race battle.

By lap five Perry from ninth had moved ahead of Crawford in second place however over the closing few laps could not get by Meyers who took the win ahead of Perry, Crawford, Rod Saville, Chalcraft, Blackeby, Janelle Saville, Florimell, Bacon and Buis.

Damage in the first heat included Fowler who broke a chain which assisted in destroying the front and rear sprockets, Ward (# 37 Whisper Trailers – Yamaha) cooked a third engine is as many race meetings whilst there was a caution on lap eight when Florimell had a spin in turn two and got a slight whack from the Rod Saville car, both re-started the race. 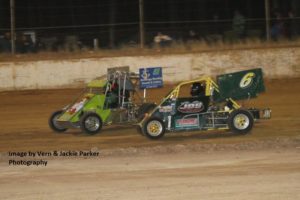 Stainer from the front wasted no time in securing the lead and taking Perry and Florimell along on lap one. On turn four of lap one contact of wheels between Stainer and Florimell resulted in the front wheels of Florimell’s car lifting off the track and the car facing skyward before hitting the track again and continuing on with the race. There was a bit of action through the field however Stainer led from start to finish over ten laps with Perry, Florimell, Saville, Chalcraft, Bacon, Denning, Buis and Andrew Ward (# 88 Fry’s Service & Repairs – Suzuki ) the finishers.

During the race as the leaders rounded up the backmarkers Florimell (# 81 TM Lineboring & Engineering – Suzuki ) went to the low side of Denning  who moved off his line slightly where Perry was going on the high side and Perry had nowhere to go and rode the wheel of Denning and spun just tagging the wall on the back straight gently.

The stewards correctly put Perry back in his position as Denning was deemed to have moved off his line to cause the incident. Blackeby did not finish heat two with electrical issues.

Former Victorian champion Jason Crawford took the lead from lap one with Stainer and Myers chasing him. Janelle Saville picked up a couple of places over Bacon (# 36 DB Cleaning & Kanga Hire – Yamaha ) and Denning as she moved forward, it took until lap nine of ten for Stainer to make a pass on Crawford to take the lead as the chequered flag dropped the next time around. Stainer the winner from Crawford, Myers, Saville who passed Chalcraft (# 15 Oil Hydraulics – Suzuki), on the final lap and then Chalcraft, Denning, Bacon, Buis and Ward.

Fowler didn’t finish as the chain was too loose when the team really needed a half link to remove a full link out of the chain, Fowler elected not to start the final with this issue either. Blackeby had electrical issues again and Chalcraft had a run around in the Mark Shiells owned car that Stainer currently races and just putted around the back as she was not in the hunt for points due to having completed her allotted three races.

Drivers then set out on a final of fifteen laps with the lowest point’s drivers starting at the front of the field. Bacon and Denning, Janelle Saville (# 6 Phantom Stickers – Suzuki), Chalcraft, Florimell, Crawford, Rod Saville, Myers, Stainer, Perry and Buis who as a rookie has to start at the back of the fast cars for their first three race meetings, completed the line-up.

From fifth spot on the grid, Florimell made short work of getting to the front with Janelle Saville, Stainer, Crawford and Rod Saville the lead five. Stainer (# 51 Anchorage Boarding Kennels & Cattery – Yamaha) then roared past Florimell into the lead on lap two.

Crawford moved into third on lap three and then into second on lap four as Janelle Saville was swamped by her dad Rod and Myers.

Rod Saville spun on lap five and moved to the rear of the field, on lap six a crash in turn four between Rod Saville and Chalcraft who lost a rear wheel due to contact in this crash, Bacon and Denning who rolled his car in the same crash brought the yellows on again.

On lap six Florimell got back past Crawford and into second and by lap eight Myers and Perry moved into third and fourth as Crawford made a mistake in turn 1 and dropped back in the pack. Myers passed Florimell for second on lap twelve whilst Bacon spun in turn one and then did the same again on lap fourteen.

For much of the race the top four or five cars were so close together, Florimell lost drive on lap fifteen and Perry had nowhere to go and crashed into the Florimell car and then tried to move down low in turn two as there was no drive up high and Crawford tried to do the same. 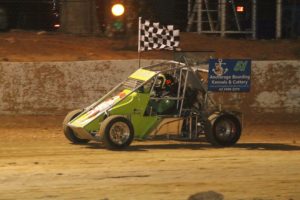 The race was declared, with Florimell whose car had broken down deemed the cause of the stoppage and the chequered was held out for Stainer who had the win from Myers, Perry, Crawford, Rod Saville (# 59 Perry Bros Chassis – Suzuki), Buis and Bacon.